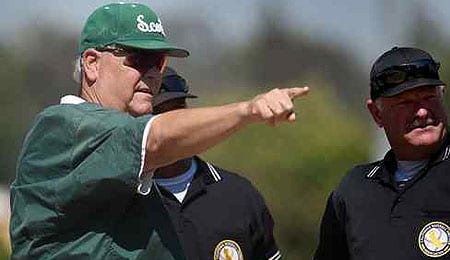 Mike Alonso recently wrapped up a 33-year run as the head coach of the Upland (CA) High School baseball program. What do you think the odds are an MLB manager could ever have that long a run with one team these days? You’ll probably need the Bwin app to figure that one out.

As a testament to his brilliant career, let’s look at some of the players that came through Alonso’s system during his tenure:

Of course, the most famous Upland alumni — and one that predates even Alonso’s tenure, is Hall of Famer Rollie Fingers, who was one of the few dependable stoppers the Brewers ever had during his tenure in Beer City, where he spent his final four seasons.

Now it’s your turn. In the comments below, share with us any Alonso or Upland Alumni stories.

By RotoRob
Tags: Mike Alonso
This entry was posted on Wednesday, July 20th, 2016 at 12:08 pm and is filed under BASEBALL, High School, RotoRob. You can follow any responses to this entry through the RSS 2.0 feed. Both comments and pings are currently closed.