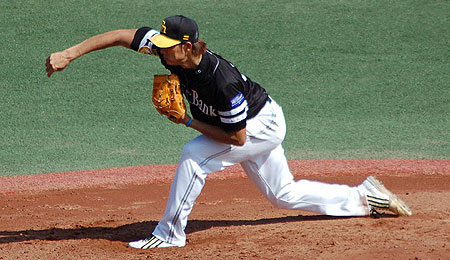 Despite ace Kazumi Saitoh’s struggles and shoulder woes, the Fukuoka SoftBank Hawks are the class of the Pacific League.

The Fukuoko SoftBank Hawks finished up April on a eight-game winning streak and have kept on rolling as their current 25-15-2 record tops the Pacific League by two games over Lotte. How have the Hawks soared to the top of the PL? Plenty of hitting and tons of pitching.

This is a system that produced Kenji Johjima and Tad Iguchi; where Pedro Feliciano and Tony Batista went to get their careers back on track; and where former big leaguer stars Wille Upshaw, Rich Gossage and Kevin Mitchell once toiled.

The highlights of the club’s 2007 season to date:

Foreign Player Watch: No, he’s not on Fukuoka, but do you remember Jeff Liefer? The former White Sox first baseman who was last seen in the majors when the Indians outrighted him to Triple-A in October 2005, signed with the Seibu Lions in December 2005. Now in his second season in Japan, the 32-year-old is not doing enough to warrant any attention back home. A DH/PH type now, Liefer played in just 49 games last year, scoring 24 runs off of 36 hits (23 of which went for extra bases, hence his robust .601 SLG). But he struck out 35 times last year and this season, he’s struggling with a .235 mark in the early going. It appears that Liefer won’t be parlaying his Asian experiences into a ticket back to the majors.

By RotoRob
This entry was posted on Monday, May 14th, 2007 at 1:30 pm and is filed under BASEBALL, RotoRob, Team report. You can follow any responses to this entry through the RSS 2.0 feed. You can skip to the end and leave a response. Pinging is currently not allowed.