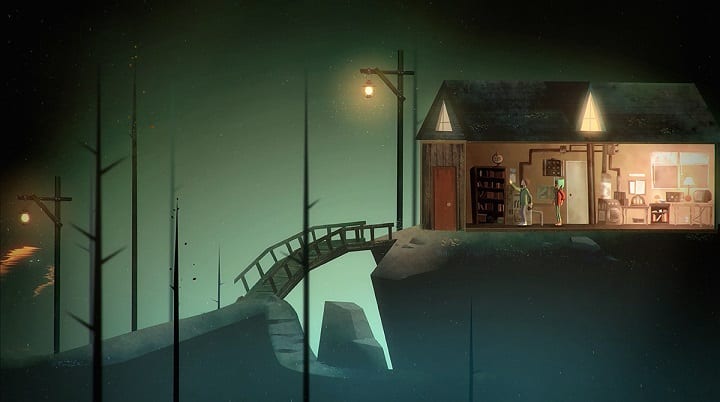 Can we get a crossover game with OlliOlli? Please?

We’ll confess to knowing next to nothing about Oxenfree when it launched earlier this year on Xbox One and PC, but Night School Studios’ debut got some positive buzz, so when it recently made the jump to PlayStation 4 we made sure to get our hands on a copy. What we found is a decidedly non-traditional experience that’s rich on character development and intrigue but light on gameplay.

Even taking into account its simplicity, there’s something to be said for the slick way everything has been implemented. “X” does all contextual physical actions (pushing buttons, climbing objects, jumping gaps) and each of the other three face buttons represent a dialogue choice. Word balloons pop up around your character that are both colour coordinated and positioned to match the controller.

Beyond that, the only other function of note is the ability to tune a handheld radio. Initially it’s used to listen to pre-recorded information about landmarks on the island you’re on, but eventually you’ll find some less traditional uses for it. It’s all very smartly laid out.

As with the controls, there’s a simplistic charm to the graphics of Oxenfree thanks to its use of basic shapes and colours in constructing both the environment and the characters. It pulls the camera way back, however, which means you never see reactions or emotions. Everything is conveyed verbally. There are also times when it’s difficult to see characters waiting for scripted sequences to be triggered. Still, it’s an overall win for the graphics.

As noted, the faraway nature of the visuals puts all the narrative weight on the voice acting, and since the game is all about story and character development that’s a sizable burden. Thankfully, the smartly written dialogue is well performed throughout — even though some response options come across as unrealistic in the later stages when so much has happened. The music and effects are strong as well.

You are Alex, a teenage girl heading to an abandoned island with your best friend (Ren) and newly minted step-brother (Jonas) to meet up with Nona, who Ren has a crush on, and Clarissa, the one-time girlfriend of your late brother Michael. What’s supposed to be a fun night of socializing quickly takes a turn for the weird, however, after you accidentally set supernatural forces in motion.

Without getting into too many specifics, Oxenfree tells an interesting, well-crafted story that delves into a lot of mature topics while still creating an unsettling (and sometimes foreboding) vibe that permeates most of the game. Jump scares are pretty much out the window given the graphic style and long-range camera, and honestly the story is all the better for it.

Of course, there will doubtless be those that’ll consider Oxenfree more of a visual graphic novel than a video game — since it has no fights to win or puzzles to solve or even quick-time events. That’d be a narrow view to take, however, as the game proves compelling from start to finish in a way that countless titles do not.

In fact, the story — which ran about six hours on our initial foray — is engaging enough to warrant at least one more playthrough to take different approaches to situations. There aren’t as many clear-cut fork-in-the-road moments like one of TellTale’s episodic endeavours, but there are still important choices to be made along the way.

Ultimately, what Oxenfree does best is get you to care about the relationships between characters, and it’s that investment that carries through the game. It matters when Ren and Jonas clash and then ask you to side with somebody. It matters when Clarissa blames you for Michael’s death. Oxenfree is a game of choices, big and small, and each time you make one the story feels more like yours. If that’s not gaming, we don’t know what is.

A character-driven story with enough mystery to keep things moving at a brisk pace, Oxenfree is one of the most pleasant surprises of 2016.

By HC Green
Tags: Oxenfree, Video Game Review, Xbox One
This entry was posted on Saturday, June 11th, 2016 at 5:28 pm and is filed under Herija Green, Video Game Reviews. You can follow any responses to this entry through the RSS 2.0 feed. Both comments and pings are currently closed.