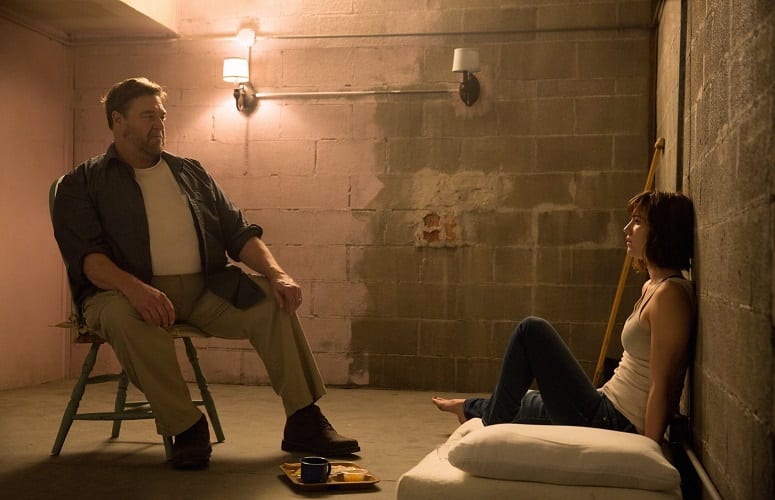 Not how you wanna wake up.

It seems as though any time a moderately successful IP hits Hollywood it invariably becomes a matter of not if, but when a sequel will follow. Such has been the case with Cloverfield, a “found-footage” monster movie from producer J.J. Abrams during the height of Lost, which was a massive box office success and introduced more than enough unique elements to create additional films.

Nearly eight years later, audiences were given 10 Cloverfield Lane, a film that isn’t a direct sequel but exists within the same universe. While it shares little common ground with its spiritual predecessor, the intense psychological thriller is actually a much better movie.

After an unseen fight with her fiancé, Michelle (Mary Elizabeth Winstead) leaves their New Orleans apartment and ends up in a car accident while driving through some very rural areas. She awakens disoriented to find herself chained up and with an IV drip in her arm. It’s here she meets Howard (John Goodman), who explains where she is, how she came to be there and, more importantly, what has happened above ground.

Michelle is skeptical of Howard’s story about a mysterious attack, though that softens a bit when she meets Emmitt (John Gallagher, Jr.), who voluntarily entered the shelter after witnessing something he struggles to explain. Still unconvinced, Michelle tries to escape, only to find a delirious woman with skin legions pounding on the outside of the shelter trying to get in.

This convinces Michelle that Howard is telling the truth, and, for a time, the three of them get along quite well inside the shelter. Soon, however, Michelle starts to suspect Howard may be as dangerous as whatever unknown threat is awaiting them above ground. That leaves her with two upsetting options: remain indebted to (and trapped with) Howard or escape and take her chances.

There’s a strong narrative at work here, and that you’re only privy to the same information as Michelle instantly makes you sympathize with her. You literally never have a moment when you peek in to see what Howard or Emmitt are doing. The movie puts you with Michelle for the duration, and it’s incredibly effective in building tension and making your brain posit all kinds of theories.

While the movie’s final act doesn’t feature the same claustrophobic tension that some of the build does, it offers up some interesting twists that you probably won’t see coming while creating an entirely different type of anxiety for the audience to experience.

We didn’t find much to complain about. A few moments here and there missed the mark, but when the most notable item we could remember was a locked car in a situation in which you’d never lock a car, you know it’s a good movie.

It’s a little surprising there isn’t more on the bonus side with the various featurettes, which add up to less than an hour. Granted, we’d prefer that to meandering puff time fillers, and most of what is presented is worth a watch, but there’s nothing that warrants a second look.

10 Cloverfield Lane is one of the better films we’ve seen in 2016, and that it manages to create such a tension-filled ride while still managing to maintain a PG-13 rating is doubly impressive. It’s clever, well acted and does a great job of keeping you engaged until the credits roll.

By HC Green
Tags: 10 Cloverfield Lane, Blu-ray reviews, JJ Abrams, John Goodman
This entry was posted on Friday, June 10th, 2016 at 3:51 pm and is filed under Herija Green, Movie Reviews. You can follow any responses to this entry through the RSS 2.0 feed. Both comments and pings are currently closed.