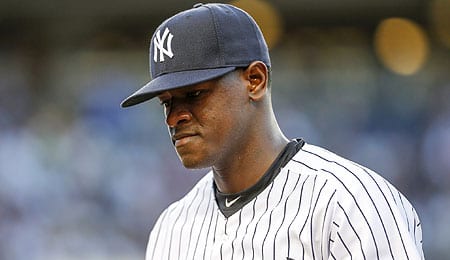 Luis Severino may not be dejected for long. (Andrew Mills | NJ Advance Media for NJ.com)

Welcome back to another week of Fantasy baseball. JB is again embroiled in academia, so RotoRob takes on the Troll for at least one more week.

This week, the ChiSox have given up on Jimmy Rollins and begun the Tim Anderson era (for more on this top prospect, see below); the 2016 MLB Draft — in which the Phillies added another important building block in high school outfielder Mickey Moniak — wraps up this weekend; and a brawl between KC (surprise, surprise) and Baltimore has resulted in suspensions to Yordano Ventura (yes, again) and Manny Machado.

Now on to this week’s Fantasy baseball waiver wire recommendations…

Alex Rodriguez, DH, New York Yankees (ESPN: 21.5 per cent; CBS: 47 per cent): What? ARod on the waiver wire? Yup. After last season’s shocking comeback, the man we love to hate really stunk it up early on this year and it couldn’t have happened to a nicer guy. But he’s really showing signs of life lately, delivering a rare extra-base knock Thursday while driving in a pair (giving him four RBI over a three-game stretch). Yes, he’s still whiffing way too much, but Rodriguez is suddenly slashing .317/.326/.439 in June, so consider scooping him up while you can because he won’t remain this available for long. Hell, he’s even saying nice things about his teammates… to a busty reporter (see video below).

Luis Severino, SP, New York Yankees (ESPN: 9.2 per cent; CBS: 40 per cent): Yes, this talented youngster burned lots of owners over the first few weeks of the season, ultimately landing on the DL before being demoted to Triple-A. But if Wednesday’s start is any indication, Severino will soon be ready to get another crack at the bigs as he tossed six shutout frames, scattering three hits while fanning seven and walking just one. Looking for a second half impact arm to stash now? This is your man.

Didi Gregorius, SS, New York Yankees (ESPN: 7.1 per cent; CBS: 19 per cent): What? Is this the all Yankees edition? Well, here’s another Pinstriper that’s turning things around after a sluggish start. On Friday, Gregorius had two hits including a double for the second time in three games, this time driving in a pair, to boot. You’ve got to like the way he’s swinging the bat lately (.296 in the last week; .306 in June), and his extra-base sock is actually up slightly from last year. Gregorius makes for a solid AL-only or deeper mixed league option.

Tim Anderson, SS, Chicago White Sox (ESPN: 11.6 per cent; CBS: 33 per cent): The White Sox summoned their top prospect on Friday and he wasted no time proving he belongs with two hits, including a double, and a run in his debut. A 2013 first rounder, he won’t be 23 for another couple of weeks, but if your team needs an injection of speed, give him a long look. Anderson swiped 49 bases in 125 games at Double-A last year and had accumulated 11 in 55 games at Triple-A before getting the call. He’s also consistently hit over .300 since turning pro. This one will fly off your wire this weekend, so don’t dawdle.

Anthony Swarzak, RP, New York Yankees (ESPN: unowned; CBS: unowned): Another Yankee? Yeah, what can we say? We hate ’em as much as anyone, but they are one of the hotter teams in the AL East, so are bearing Fantasy fruit. Swarzak was just signed to a minor league deal last week, yet is already up in the bigs and has looked real good in his two appearances, even entrusted to pitch the ninth to protect a 4-0 lead on Friday. The Yanks bullpen is stacked, so Swarzak is unlikely to carve out a very important role, but in very deep AL-only leagues he could prove useful for his ERA, WHIP and Ks. Swarzak’s career has kind of gone downhill since his big season in 2013, so if nothing else, it’s nice to see him work his way back to the Show and have some success.

Tommy Joseph, 1B, Philadelphia Phillies (ESPN: 7 per cent; CBS: 48 per cent): Before Friday’s game, Joseph got the word that he was officially the Phillies’ starting first baseman over Ryan Howard. So what does Joseph do? Oh, he goes out and mashes two dingers and drives in four runs that night. The Giants’ 2009 second rounder was dealt to Philly four years ago in the Hunter Pence trade, and he’s now finally bearing fruit. Joseph was getting on base at a ridiculous pace at Triple-A before the Phillies summoned him nearly a month ago, and now he’s finally overtaken RyHo so pick him up now.

Zach Eflin, SP, Philadelphia Phillies (ESPN: NA; CBS: 4 per cent): With Vincent Velasquez on the DL, Eflin will be called up to make his MLB debut Tuesday. Eflin hasn’t really popped up on the Fantasy radar yet, but given how he was racking up the wins with a sweet ERA at Triple-A, he deserves consideration.

Dan Straily, SP, Cincinnati Reds (ESPN: 17.9 per cent; CBS: 40 per cent): Think the Padres should have hung onto this dude? Waived by San Diego, Straily landed in Cincy and has become a rotation staple.

Brendan McCurry, RP, Houston Astros (ESPN: NA; CBS: unowned): While the Astros undergo a closer change in the bigs, McCurry is getting it done at Double-A. The A’s 2014 22nd rounder, traded to Houston last year for Jed Lowrie, saved 27 games at two levels last year, and the groundball specialist has been untouchable at Double-A. McCurry has emerged as a Dynasty option and looks ready to make his MLB debut.

By RotoRob
Tags: Alex Rodriguez, Fantasy Baseball, Luis Severino, New York Yankees
This entry was posted on Sunday, June 12th, 2016 at 10:10 am and is filed under BASEBALL, RotoRob, The Wire Troll. You can follow any responses to this entry through the RSS 2.0 feed. Both comments and pings are currently closed.