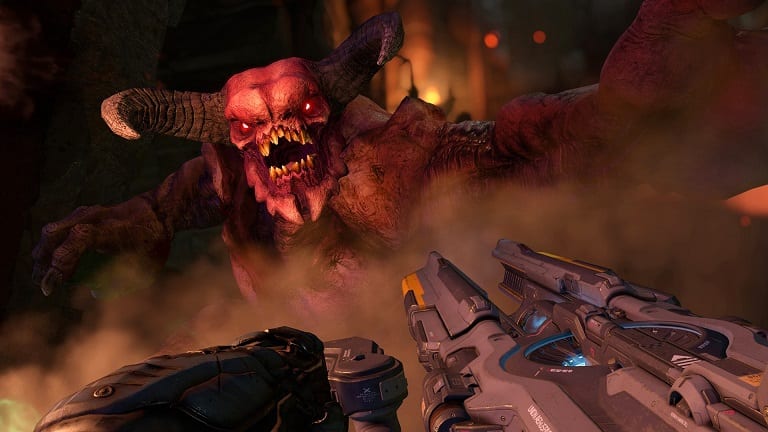 Someone here is in deep trouble…

No matter where the series goes, Doom’s place in gaming lore is secure. Its first two installments are classics, and 2004’s Doom 3 was damn good as well. That being said, 12 years is a long time between releases in any medium, and in the realm of first-person shooters it’s an eternity. So does developer id Software still have the magic touch? Let’s go to Hell and find out.

Although the setup is simple, there’s actually a good amount of depth to the action. You’ll start off with a pistol and add a shotgun early on. Tapping the right shoulder button flips between them, and once you start filling out your arsenal, holding it down will bring up a weapon wheel. The left shoulder tosses your equipment (grenade, holographic projection, etc.), which operates on a cooldown timer.

Each gun has a secondary ability — most have two, though only one can be equipped at a time — that you arm by holding down the left trigger. For example, the assault rifle can be aimed down the sight with rounds doing more damage when zoomed or launch several micro missiles. The shotgun has a three-round burst, the gauss cannon can charge up a penetrating beam attack and so on.

These are your game changers, and knowing when to deploy them and when to hold back can mean the difference between success and failure during some of the game’s massive firefights. You also have a pair of limited use ass-kicking abilities: your chainsaw and the BFG. You get the chainsaw pretty early on, and it means instant death for demons of any size (larger demons use more segments of fuel). It also causes enemies to drop tons of ammo, so it has a strategic element as well.

As for the BFG (the Big Fu**ing Gun), it basically wipes out everything in the general vicinity, arcing through the sky and turning enemies into demon chunks. You won’t get your hands on it until fairly late, but the game definitely has plenty of battles on tap where it’ll come in handy.

One of the most enjoyable elements in Doom is the “glory kills.” Before dying, demons will often enter a staggered state in which they’ll stand still and shimmer. If you can get within range and execute a melee attack you’ll rip them apart.

Actions vary based on where you initiate the kill (behind, low, in the air) and what kind of demon you’re fighting. It’s deliciously gruesome, and disemboweling demons this way will cause them to drop health.

There’s nothing exceptional in Doom’s graphics, but everything is well done and visceral. Levels are linear without making you feel funneled thanks to plenty of nooks and crannies to explore in search of hidden goodies. Enemy variety and design is very strong, and the way you go about killing them turns out to be very satisfying. There’s a connectivity to the world as well that makes it feel authentic even with the crazy sci-fi back story involved.

Despite a judicious use of voice acting, this has to be one of the better audio experiences we can ever remember. The soundtrack is absolutely perfect, and this is coming from someone that was always been more prone to like hip hop than rock and roll. That’s immaterial here because it’s so well done. The way the guitar swells when a big fight is about to begin is tremendous. Demons screech, guns pack a wallop and more. It’s a tour de force for your ears.

Awakened without context to find an area overrun by demons, our silent protagonist is quickly brought up to speed. You’re on Mars at a research facility that was harnessing power from Hell to solve the world’s energy crisis. One of the scientists, Dr. Olivia Pierce, has decided to side with the demons and opened a portal to Hell that’s allowing demons to come streaming through. You need to close it.

To do that you’ll need to fight your way through the wrecked facility with the aid of Dr. Samuel Hayden, who values the idea of collecting the energy but realizes the portal must be shut. He guides you to collect various artifacts on Mars and also make multiple trips to Hell itself. Unfortunately, there are thousands of demons standing between you and your mission.

Doom takes a bit of an old-school approach to third-person shooters, casting aside modern conventions like regenerating health and cover. Here you face a relentless enemy that isn’t going to sit back and let you pick them off. Action is kinetic as you move to and fro, cutting down an ever-increasing mix of demons, each with their own strengths and weaknesses.

As noted earlier, there’s also a tactical element. Ammo can run low during extended firefights so you can’t rely on a single approach and with demons in constant attack mode your health/armour will be taking a beating as well. The big fights are expertly constructed to expand your skills, though a couple of the actual boss battles feel disappointingly simple in comparison.

There’s also a number of collectibles to find in each level. Argent energy allows you to permanently boost your health, armour or ammo, deceased guards have keys needed to buff your armour with new abilities and finding secrets/completing challenges/killing demons will net you weapon upgrade points as well.

Beyond the campaign, there’s a pedestrian multiplayer and surprisingly deep level generator known as SnapMap. Both modes can extend the experience, but neither stands out the way the single-player adventure does. Bear that in mind if you’re someone that buys shooters primarily to play online.

Anchored by one of the best campaigns we’ve seen from a shooter in recent memory, Doom is an absolute blast to play. While the secondary offerings are nothing special, the single-player mode is well worth a purchase all on its own.

By HC Green
Tags: Bethesda, Doom, id Software, Video Game Review
This entry was posted on Friday, May 20th, 2016 at 4:48 pm and is filed under Herija Green, Video Game Reviews. You can follow any responses to this entry through the RSS 2.0 feed. Both comments and pings are currently closed.