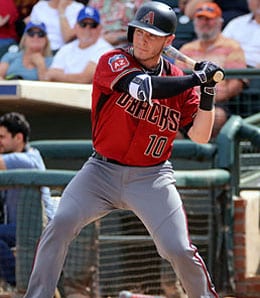 Chris Herrmann is suddenly on the strong side of a platoon. (en.wikipedia.org)

Welcome back to The Wire Troll for Week Eight, as we discuss waiver wire recommendations for your season-long Fantasy baseball teams.

This week witnessed Jackie Bradley Jr. extend his hit streak to 26 games; Jose Bautista getting Odor-punched in the jaw; Joe Kelly flirt with a no-no in his first game back from the DL; and Franklin Gutierrez belting a 473-foot monster. Now let us take a look at some players that are sitting on the waiver wire in your leagues that could provide a boost to your lineup for the upcoming week and beyond.

Chris Herrmann, C, Arizona Diamondbacks (ESPN: 13.5 per cent; CBS: 20 per cent): It seems we have a bit of a platoon behind the plate in Arizona, and Herrmann is on the strong side of it. He has made the most out of this opportunity by hitting .290 with five homers, 19 RBI and swiping two bases because, YOLO. The left-handed hitter has especially been on a tear of late, hitting .455 over his last four games and even showing some nice moves to avoid the tag at the plate (see video below). As long as the D-Backs keep sitting Welington Castillo against righties, Herrmann will provide plenty of value at a terribly weak Fantasy position.

Justin Bour, 1B, Miami Marlins (ESPN: 28.3 per cent; CBS: 41 per cent): Bour is finally beginning to regain his 2015 power stroke (when he bashed 23 dingers). In May, he has already gone yard five times and cut his strikeout rate in half from the first month. Bour is seeing the ball much better, as evidenced by his ridiculous 46.3 Hard hit percentage over the past three weeks, and this could be heading to a power surge into June. Get him before he’s gone for good, but have a backup plan for when the Marlins face southpaws. Bour owns just two hits against lefties this season.

Steve Pearce, 1B/2B/OF, Tampa Bay Rays (ESPN: 32 per cent; CBS: 44 per cent): In 2014, Pearce hit .293 with 21 homers in only 383 plate appearances for the Orioles. After his disappointing follow-up last year, the Rays took a chance on the lefty-killer. It’s a move that’s paying huge dividends in the wake of the shoulder injury suffered by Logan Forsythe. So far this month, Pearce is hitting .340/.439/.766 with six homers, 13 runs and 13 RBI. Over the last seven days, the Rays have the second highest number of runs in the league. Coincidence? We think not. Pearce, who has been hitting cleanup for Tampa, has seen his Fantasy ownership skyrocket over that time, and likely won’t be available on your waiver wire after Sunday.

Eduardo Nunez, 3B/SS, Minnesota Twins (ESPN: 23.8 per cent; CBS: 35 per cent): Ever since Eduardo Escobar went on the DL with a hamstring strain, Nunez has been very effective for the Twins. On the season, Nunez is hitting .331 with three homers and eight steals while scoring 16 runs as the leadoff man. Escobar is eligible to return early this week, but with the way Nunez has handled shortstop this month, Escobar may not be returning to a starting job. Until we see how Manager Paul Molitor handles this situation, Nunez is worth a pickup for steady top of the lineup production.

Matt Wisler, SP, Atlanta Braves (ESPN: 19.2 per cent; CBS: 48 per cent): Acquired in the Craig Kimbrel trade last season, Wisler is finally looking like the starter we all thought he might become during his “prospect” days. While Wisler is not missing too many bats (6.34 K/9), he’s keeping men off the bases with a 0.99 WHIP and .205 BAA. His last outing versus the Phillies was extremely encouraging, as he struck out seven over 6 2/3 innings of one-run ball. Wisler seems to be sticking around in the Braves rotation, and can provide solid ERA and WHIP boosts to your Fantasy team.

By JB Branson
Tags: Steve Pearce
This entry was posted on Sunday, May 22nd, 2016 at 3:17 pm and is filed under BASEBALL, Jordan Branson, The Wire Troll. You can follow any responses to this entry through the RSS 2.0 feed. Both comments and pings are currently closed.