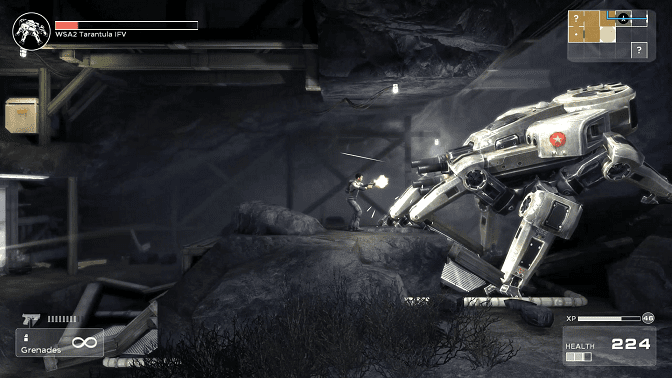 Go ahead, bring a pistol to a mechanized spider fight.

When Shadow Complex hit the Xbox 360 as the final piece of 2009’s Summer of Arcade it immediately became one of our favourite games for the system. Now, nearly seven years later, Chair Entertainment and Epic Games have updated it for launch on the Xbox One (and soon the PS4 and Steam, too) with Shadow Complex Remastered. Let’s dust off that ninja training and see how it holds up.

Nothing has really changed from the original, and outside of needing a few minutes to reacquaint ourselves with the feel of the jump it was like we never left. Scrambling left/right and up/down across screens can be buttery smooth once you get the hang of it, creating an old-school mentality in which it’s not just about navigating a section but rather how deftly you do it.

Shooting remains a bit fickle thanks to enemies firing at you from off screen or, more frequently, foes that are in the 3D background. With Shadow Complex being 2.5D and limiting your actual movement to a 2D plane, targeting enemies in the background requires the game to switch the targeting laser into those areas. That isn’t always a smooth transition, and it can get you lit up, especially early on when you haven’t acquired multiple health and/or armour upgrades.

Save points are plentiful, so you rarely lose much progress, but it’s the one area of the controls that would have benefited from a little refinement. As it stands you’ll just have to roll with the occasional frustration and chalk it up as the proverbial cost of doing business.

At the time of its launch, Shadow Complex was about as visually pleasing as any Xbox Live Arcade game we’d ever seen. While the remastered graphics look good, it’s certainly not on par with some of this generation’s downloadable standard bearers like Ori and the Blind Forest.

What hasn’t been diminished, however, is the diversity of the areas and the quality of the layout. The mix of indoor and outdoor environments remains enjoyable, and there’s a healthy amount of diversity in the enemy types. Although it can be a little dark now and then, even with the flashlight activated, it merely serves to make pieces of exploration marginally tougher than they should be.

Despite the presence of Nolan North as central character Jason Fleming, the voice acting lacks subtlety and isn’t up to modern standards. Sound effects — such as gunfire, enemy chatter and screams — are really good, particularly some of the truly satisfying guns found later in the game.

Set in contemporary America, Shadow Complex opens with the assassination of the Vice President before quickly shifting west to find Jason and his date getting ready to do some spelunking. She’s captured almost immediately, though, and like any would-be suitor you jump headlong into danger to rescue her armed with nothing but a flashlight.

As you explore the base in an attempt to reach her you become privy to a larger plan and realize you may be the only one to stop it. To do that, you’ll collect additional weapons and equipment, growing stronger and more versatile each time. New equipment also means access to new areas, which leads to lots of backtracking and exploration as you try to upgrade your gear.

It’s vintage “Metroidvania,” and it’s done exceptionally well. You’re frequently seeing question marks pop up on the map, indicating a hidden item, and it’s very addicting to head to those areas once you’ve found something new. This was our fourth time playing through Shadow Complex, and trying to unlock the entire map and find everything remains a tremendous draw.

If there’s a weakness with the game’s structure it’s that most of the combat-related challenge takes place in the early stages. Once you’ve found a significant percentage of the health and armour upgrades you have to mess up pretty significantly to be defeated. Even on the highest difficulty setting it’s not what we’d consider a tough game to complete.

Once you finish the game (figure on 5-to-6 hours), you can start a new game in which your overall level (which provides passive boosts) is retained while all equipment is reverted. There’s also a series of 21 challenges called “Proving Grounds,” presenting obstacles and only providing certain gadgets to overcome them. These can be replayed as often as you’d like for high scores.

It should be noted that Remastered is a full-price release (US$14.99), whether you own the 360 version (which is backward compatible) or not. Considering that the original was also available for free on PC not long ago it makes the lack of a deal for previous owners seem like a missed opportunity.

We were a bit worried that time would erode the experience, but Shadow Complex Remastered pulled us back in immediately and didn’t let go until we’d blown through it once again. If you like Metroidvania games and have never played it, this is a must own.