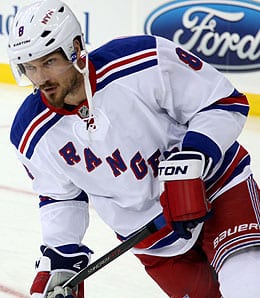 Congratulations! If you and your team are with us this far, you’ve made your league’s semifinals. It’s quite the accomplishment, but the season is still far from over. If you’re one of the unlucky bunch to have Tampa Bay Lightning defenseman Anton Stralman (fractured left fibula) on your Fantasy blueline, we feel for you but — fear not — we know a guy that might be able to step in seamlessly in his absence. As for the Lightning, well, it will have to look inwards to replace him.

Kevin Klein, D, New York Rangers (ESPN: 31.5 per cent; CBS: 27 per cent): Klein has been a beast the past few weeks, scoring at an impressive point-per-game pace with two goals, seven points, a plus-7 rating, 11 shots on goal, 14 hits and 14 blocked shots in his last seven games. With just eight goals and 21 points in 61 games, he’s not going to be a consistent offensive defenseman, but you don’t need him to be — just hope and pray he keeps it up over the final two weeks of the season.

All kidding aside, Klein is a valuable contributor in hits and blocks, and boasts an impressive plus-19 rating. More importantly, his average ice-time of 20:17 proves how important he is in New York’s defensive corps. Klein will have every chance to build upon his recent impressive run. We suggest you give him a shot; he may even help you with some periodic penalty minutes (see video below).

Devante Smith-Pelly, RW, New Jersey Devils (ESPN: 28.5 per cent, CBS: 12 per cent): Over in Jersey, one of the newest Devils is enjoying a fresh start. Between Montreal and New Jersey, Smith-Pelly has just 13 goals and 23 points in 57 games played, but, like Klein, he’s also been on a point-per-game pace in his last seven games, collecting four goals, seven points, a plus-5 rating, 19 shots on goal, eight hits and two blocked shots. Again, you don’t need a monster season from Smith-Pelly, just another solid few games.

Troy Brouwer, RW, St. Louis Blues (ESPN: 45 per cent; CBS: 30 per cent): The Blues have clinched a postseason berth, and Brouwer’s recent play has been a big reason why. The former Washington Capital has two goals, seven points (what is it with seven points in seven games, right?), a plus-3 rating, two penalty minutes, a power play goal, 21 shots on goal, 10 hits and four blocks in his last seven games played. He’s had a solid season for a middle-six forward with 15 goals, 33 points, a plus-1 rating, 62 penalty minutes and 125 shots on net in 75 games.

Sean Couturier, C, Philadelphia Flyers (ESPN: 23.4 per cent; CBS: 20 per cent): With the Flyers fighting for the playoffs, “Coots” has been a play-making machine, collecting seven assists, a plus-3 rating, six penalty minutes, 11 shots on goal, four hits and four blocked shots in his last eight games. He’s got nine goals, 34 points, a plus-9 rating, 26 penalty minutes and 101 shots on goal in 55 games, and will be counted on as an important piece heading into the season’s final stretch.

Scott Wedgewood, G, New Jersey Devils (ESPN: 8 per cent; CBS: 4 per cent): With Cory Schneider (knee) considered day-to-day, Keith Kinkaid and Wedgewood are receiving more time in net, the rookie Wedgewood in particular. In three games played since being recalled from AHL Albany, Wedgewood has two wins, a 0.66 goals against average, a .978 save percentage and a shutout. It’s a near immaculate start, but expect Kinkaid to receive the majority of starts until Schneider can make his return. Still, Wedgewood might be a name to file away for the future.

By Dakota Case
Tags: Kevin Klein
This entry was posted on Sunday, March 27th, 2016 at 9:38 am and is filed under Dakota Case, HOCKEY, The Wire Troll. You can follow any responses to this entry through the RSS 2.0 feed. You can skip to the end and leave a response. Pinging is currently not allowed.