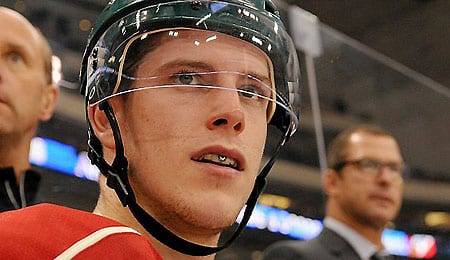 Charlie Coyle looks like a new leader for the Wild. (Blogs.twincities.com)

It’s amazing what one week and a coaching change will do for a club.

Entering the week 1-7-2 in their past 10 games, the Minnesota Wild enters Sunday with a three-game win streak, and can sweep the week with a victory against the Metro-Man-to-their-Megamind Chicago Blackhawks Sunday in the first ever NHL outdoor regular season game in franchise history. Yes, we used an animated super hero movie reference, but it fits. Ooooh, does it.

Chicago has won three Stanley Cups in the past six years, steamrolling Minnesota twice in doing so, including the past three years running. If there was ever a time for Megamind to get a win, Sunday would be the day. Let’s get to the picks, eh?

While the rest of Minnesota’s young forwards have struggled this season, Coyle has improved by leaps and bounds. With 31 points in 57 games, the East Weymouth, Mass. native is just four points shy of his career high, and he’s doing it in far fewer games. With the Wild’s struggles this season, the 2010 28th overall pick has bounced around from third line centre, to second or first line winger, seeing regular time with linemates ranging from Justin Fontaine and Thomas Vanek to Nino Niederreiter, Zach Parise and the “KapFinn” himself.

In 58 games played this season, Coyle has 18 goals, which is tied with Parise for the team lead, 31 points, a plus-6 rating and 104 shots on goal. The future looks bright for the big 23-year-old and he sure has been winning fans in Minnesota (see video below).

Patrick Eaves, RW, Dallas Stars (ESPN: 13.2 per cent; CBS: 11 per cent): Eaves hasn’t been a big Fantasy contributor in his career or even this season, but he’s had a big string of success in recent games that should at least command part of your attention. In his past seven contests, the Dallas winger has managed to collect four goals (three coming on a hat trick), seven points, a minus-1 rating, two penalty minutes, three power play goals, 15 shots on goal, 14 hits and a blocked shot. It’s impressive, but Eaves still only has seven goals, 12 points and 61 shots on goal in 39 games played this season.

Travis Zajac, C, New Jersey Devils (ESPN: 38.5 per cent; CBS: 24 per cent): Zajac hasn’t lived up to the high expectations of the Devils faithful after the departure of Parise in free agency in 2012, but he’s still a relatively stable Fantasy option. He has eight goals, 20 points, a plus-6 rating and 81 shots on goal in 51 games played, including a goal, four points, two penalty minutes, 13 shots on goal, five hits and four blocks in the past seven games.

P.A. Parenteau, RW, Toronto Maple Leafs (ESPN: 10.6 per cent; CBS: 17 per cent): The Leafs are one big hot mess this season, but the rest of Canada’s NHL teams haven’t fared much better. Still, Parenteau has been a bright spot, particularly recently, with three goals, five points, 20 penalty minutes, a power play goal, 21 shots on goal, three hits and a blocked shot in his past six games. In 56 games played this season, he has 15 goals, 30 points, a minus-1 rating, 46 penalty minutes and 122 shots on goal.

Louis Domingue, G, Arizona Coyotes (ESPN: 35.8 per cent; CBS: 46 per cent): We mentioned Domingue several weeks back, and then the rookie — like many do — experienced a bit of a slump. Now, he’s back and posting solid numbers once again with three wins, a 2.21 goals against average and a .920 save percentage in his past five appearances. In total, the 2010 draft pick has a 12-8-3 record, a 2.55 goals against average, a .916 save percentage and two shutouts in 24 games played, making him a very solid No. 2/3 goaltender on your Fantasy team.

Fantasy Tip of the Week: We here at the hockey side of RotoRob.com have been discussing lately the use of franchise or “keeper” labels on promising rookies. Our NHL Editor is hesitant to do so in any keeper league format, but it all comes down to your league’s particular set of rules. If you participate in a league that only allows teams to retain five players at the end of every season — and you have Sidney Crosby, Erik Karlsson, Patrick Kane, Henrik Lundqvist, Johnny Gaudreau and Max Domi — it may be wise to let Domi walk and prove consistency with a better sophomore campaign.

That said, if that rookie is a Connor McDavid, Artemi Panarin, Jack Eichel or Shayne Gostisbehere, well, we suggest you go for it.

By Dakota Case
Tags: Charlie Coyle, Chicago Blackhawks, Megamind, Metro Man, Minnesota Wild
This entry was posted on Sunday, February 21st, 2016 at 10:12 am and is filed under Dakota Case, HOCKEY, The Wire Troll. You can follow any responses to this entry through the RSS 2.0 feed. Both comments and pings are currently closed.