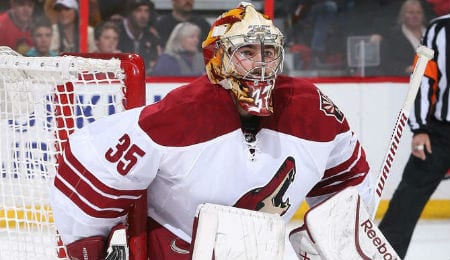 Louis Domingue is the latest young goalie to steal the hearts of Fantasy owners. (nhl.com)

The trade deadline seemed to come early this season. Nashville and Columbus swapped young franchise cornerstones, Montreal and Anaheim made a depth deal, as did the New York Rangers and Vancouver. Notable players looking for a fresh start include Tampa Bay’s Jonathan Drouin and Columbus’ Kerby Rychel, while the Isles’ Travis Hamonic is still garnering plenty of interest from Western Conference teams. All three could be wearing new sweaters at any time. Regardless, it’s an exciting time of year. Let’s get to this week’s picks.

The 2010 fifth round pick has battled his way through Major Juniors and the pro ranks, playing arguably his best puck at the ECHL level with the Atlanta Gladiators (2.10 goals against average and .930 save percentage in 43 games). Domingue is hardly here to stay, but there’s hope for a bright NHL future for the 23-year-old; if nothing else, he clearly knows how to talk the talk (see video below).

Brayden Schenn, C/LW, Philadelphia Flyers (ESPN: 23.8 per cent; CBS: 38 per cent): The younger Schenn brother had a heckuva week, scoring two goals with six points, a plus-3 rating, a power play goal, six shots on goal, 13 hits and a blocked shot in three games played. Don’t expect him to keep producing at the same rate (two points per game), but this is surely a sign of things to come. Schenn has nine goals, 21 points and a minus-1 rating in 37 games played. Maybe Philly shipping older brother Luke out to the west coast will give Brayden time and space to be his own man and carve out his own legacy in the City of Brotherly Love.

Blake Comeau, LW, Colorado Avalanche (ESPN: 2.6 per cent; CBS: 8 per cent): As one Twitter connection of ours mentioned yesterday, the Avalanche defense may be terrible, but Colorado is tearing things up offensively. In four games last week, Comeau had four points (all assists), a plus-1 rating, six shots on goal, 17 hits and two blocks. Take advantage of guys like this while they’re on a roll. A few words of caution, though: Comeau is streaky, and only has six goals and 19 points this season.

Jake Gardiner, D, Toronto Maple Leafs (ESPN: 15.8 per cent; CBS: 21 per cent): Things finally seem to be clicking for Gardiner, who had a pretty solid week with two assists, a plus-1 rating, two penalty minutes, four shots on goal, four hits and two blocked shots in three games. Gardiner’s days of the back-and-forth shuffles between the Leafs and Marlies appear to be over, as he’s played in 36 games, collecting three goals, 14 points, a plus-2 rating and 14 penalty minutes while averaging just a hair under 20 minutes per game.

P.A. Parenteau, RW, Toronto Maple Leafs (ESPN: 10.3 per cent; CBS: 16 per cent): Another Leaf you might be interested in is Parenteau. In three games last week, he had two goals, a plus-3 rating, six shots on goal and two hits. Parenteau has 11 goals, 21 points, a plus-3 rating, 22 penalty minutes and 70 shots on goal in 39 games played this season. He took a team high seven shots attempts on Saturday, so is definitely getting his chances.

Fantasy Tip of the Week: The recent Ryan Johansen–Seth Jones trade doesn’t just have an impact on Columbus, Nashville and the teams’ respective new players — it could directly affect your Fantasy team.

Jones goes from Nashville’s bottom pairing with some power play time to Columbus’ top pairing and top minutes on special teams. It’s a big boost for him, and could be for your team, as well. Johansen, on the other hand, is going from regular healthy scratches and fourth line minutes under John Tortorella to a regular shift as a franchise No. 1 centre on a perennial playoff contender in Nashville.

Both players have been placed in a prime position to succeed. Like them, now is the time for you to take advantage of an opportunity like this.

By Dakota Case
Tags: Arizona Coyotes, Louis Domingue
This entry was posted on Sunday, January 10th, 2016 at 5:44 pm and is filed under Dakota Case, HOCKEY, The Wire Troll. You can follow any responses to this entry through the RSS 2.0 feed. Both comments and pings are currently closed.