Video Game Review: This War of Mine: The Little Ones 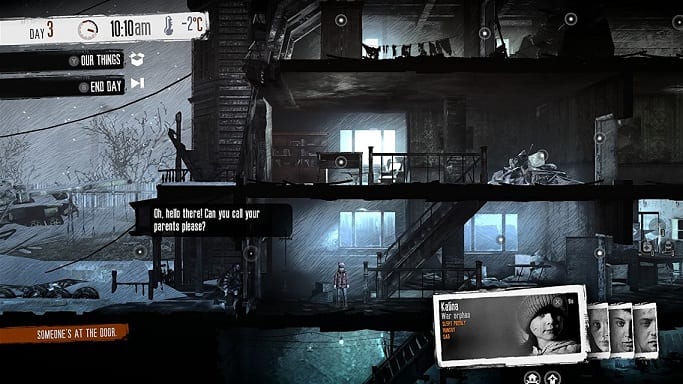 War in video games is nothing new. We’ve all been part of an elite squad tasked with saving the world from destruction, or a lone wolf able to overcome the odds and rack up a body count in the thousands. Have you ever wondered where the common folk fit into the equation?

Developer 11 bit studios did, and it released This War of Mine for PC back in late 2014. Now console gamers are finally getting a first-hand look to see if war really is hell with This War of Mine: The Little Ones from publisher Deep Silver.

There are two distinctive parts to This War of Mine. In the daytime you and your fellow survivors are in your home, turning raw materials into usable structures, cooking food, resting, building fortifications and so on. The icon-based interface can get a little busy when you get near an object in which it’s possible to do multiple things — like the refrigerator or medicine cabinet — but it’s never more than a nuisance.

At night one person in your house will go out to scavenge from a map of possible locations, each of which lists what you can expect to find there and what kind of danger you may encounter. While you can often survive at the margins by visiting abandoned areas initially, the longer you survive the more it becomes necessary to take some risks.

It’s here that the game runs into some major troubles. Simply moving around and interacting with stuff on standard salvage missions works alright, but when it’s time to sneak or (worse yet) fight, the controls can betray you. Tilt the analog stick just a little too far and your character breaks into a run, making a bunch of noise and alerting some unsavory types to your presence. It can also happen when you climb stairs, which is an action that basically needs to be queued up.

Fighting is, well, ugh. The d-pad toggles between salvage and combat modes, and once you enter the latter it becomes painfully clear this isn’t an action game. And while that sounds fine, if you’re going to include the option at least make it viable.

One prime example that sticks out was when our character was sneaking around and could hear a woman on the other side of the door about to be assaulted. We slowly opened the door, selected our knife and snuck up on the would-be assailant… only to watch in horror as we broke into a full run past our intended target and stabbed the woman. Then the guy shot us. Awesome.

As you’d expect, the world is very dark. It has an interesting pencil-drawn style and black-and-white Polaroids of real faces for your characters. Everything is dilapidated with a fog of war approach in which you can view buildings but not their contents until your character can see them.

Voices and footsteps resonate visually so you know when someone is around. It creates a pretty unique atmosphere with the only drawback being it’s sometimes difficult to make things out at night.

Melancholy instrumentals accompany you at seemingly all times, relentlessly driving home the bleak hopelessness of your situation. While the game can be pretty heavy handed with its theme, the music never crosses the line to become irritating or depressing. The various sound effects are fine.

In This War of Mine your group finds itself living in Pogoren, a fictional city under siege, though one that’s clearly based in Eastern Europe. Your task is simple: survive. Accomplishing that task is anything but simple, however, as you’ll need to maximize resources, scavenge for food, weapons and more, defend your home, barter with other survivors, treat wounds, find time to rest and so on.

While it may sound a bit overwhelming, the game does a good job of introducing concepts at a brisk but reasonable pace. That doesn’t mean it isn’t challenging. No matter how thoroughly you plan or how adept you are at scavenging, bad things are going to happen — a lot.

It can be a bit much at times as each character seems to constantly have a laundry list of issues that they’re dealing with: fatigue from lack of sleep, illness that requires medicine, wounds that need to be bandaged, guilt from stealing from other survivors, depression from killing someone and more.

One of the things that hurts This War of Mine is off-screen events. For instance, while your controlled character is out scavenging, the others will fall victim to attempted raids at a frequent clip. Even when you leave guns with them they’ll often end up gravely wounded or being robbed for supplies while still wasting ammo.

Granted, it would be unrealistic to control every aspect, but it’s still frustrating to push the right buttons, leave yourself unarmed and still find your housemates have lost valuable materials. It’s tough enough to survive until the shelling stops without the computer undercutting your survival efforts.

Although the base game is the same one that was released on PC, the reason it’s called The Little Ones is because children have been added. While they add even more weight to an already depressing ordeal, a couple of things hold it back. One, they can’t die (emergency service collects them). And two, much like the Highlander, there can only be one (at a time anyway).

It’s also worth noting that your base scenario is still random, and as such the inclusion of a child in your game isn’t guaranteed. You can take the randomness out of the equation by employing the “Write Your Own Story” mode, but that feels like gaming the system.

One part resource management sim, one part shaky stealth game, This War of Mine: The Little Ones is a tough and emotional journey, albeit one that would’ve benefitted with better controls.

By HC Green
Tags: The Little Ones, This War of Mine
This entry was posted on Saturday, February 20th, 2016 at 2:37 pm and is filed under Herija Green, Video Game Reviews. You can follow any responses to this entry through the RSS 2.0 feed. You can skip to the end and leave a response. Pinging is currently not allowed.