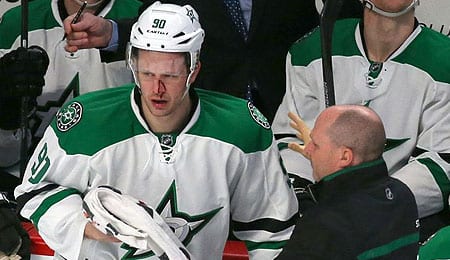 Some high-profile players were injured this week. Read on to find out who and get the latest updates in this week’s edition of Hockey Hospital.

Aleksander Barkov, C, Florida Panthers: While Barkov (upper body) has been on the ice skating, he may not be able to play Thursday. His return is vital to the Panthers as his development has been a big part of the team’s recent success.

Jason Spezza, C, Dallas Stars: The Stars have placed Spezza on injured reserve because of an upper body injury.

Losing Spezza would hurt any team and his injury damages the Stars’ forward depth (although the good news is maybe we won’t have to hear his lame-o laugh for a while; see video below). Dallas can still ice Jamie Benn and Tyler Seguin but Spezza was a key forward and had been producing very well up until now. So far this season, he had collected 40 points in 52 games and was a valuable forward on Dallas’ second line and power play.

In Spezza’s absence, Mattias Janmark may see an increased role and Radek Faksa has gotten a chance to show what he can do in the NHL.

Marian Hossa, RW, Chicago Blackhawks: A leg injury will likely keep Hossa off the ice for two weeks. Fortunately, the Hawks have plenty of weapons to compensate. Richard Panik is getting the chance to step up, so give him some consideration in very deep leagues.

Brandon Pirri, C, Florida Panthers: After sustaining an injury in the Panthers shootout victory over the Penguins, Pirri is expected to miss at least two weeks. It’s lousy timing as this kid was starting to come into his own, having already matched his career high in points.

Justin Faulk, D, Carolina Hurricanes: Faulk was not able to play in Tuesday’s game against Winnipeg, but he may return from his lower body injury on Thursday.

With Pietrangelo sidelined for a while, Kevin Shattenkirk and Colton Parayko will be relied on more and given increased responsibilities. Shattenkirk has been stuck in a long cold streak so maybe he’ll start heating up again. However, Parayko also has the potential to up his offensive output while Pietrangelo is gone. At the beginning of the season while Shattenkirk was injured, Parayko scored 11 points in 14 games. It’s not crazy to think he can see production similar to that pace with an increased role. Meanwhile, the Blues continue to play well without Pietrangelo, a testament to their depth.

Michael Del Zotto, D, Philadelphia Flyers: It has been announced that Del Zotto will be out indefinitely because of an upper-body injury. It’s a major blow to the Flyers’ slim playoff chances.

Jason Garrison, D, Tampa Bay Lightning: Speaking of teams that are sliding out of playoff contention, Tampa Bay is really struggling and things won’t be getting any better as Garrison is expected to miss 3-to-5 weeks with a lower-body injury.

Karri Ramo, G, Calgary Flames: Ramo has been placed on injured reserve with a torn ACL.

With Ramo on injured reserve, Jonas Hiller will be given a great opportunity to take hold of the starting job. With Ramo out of the picture, Hiller will have no competition so the Flames will give him starts. Even though Hiller has given up four goals in each of his last two games, the Flames don’t have anyone else to turn to. Considering Hiller should turn it around and start playing better, he should provide good value with Ramo done for the season.

While Ward is injured, Eddie Lack should provide good short-term value. The Hurricanes have been on the upswing lately and Lack could get some wins and a decent save percentage. However, Ward should be back soon (perhaps as soon as Thursday), so Lack doesn’t have a lot of long-term value. Lack’s impact may only be felt in deeper leagues.

Anders Lindback, G, Arizona Coyotes: An Achilles’ tendon injury will keep Lindback out indefinitely — probably for the remainder of the season, as he needs surgery.

By Scott Maran
Tags: Jason Garrison
This entry was posted on Wednesday, February 17th, 2016 at 10:26 pm and is filed under HOCKEY, Hockey Hospital, Scott Maran. You can follow any responses to this entry through the RSS 2.0 feed. Both comments and pings are currently closed.