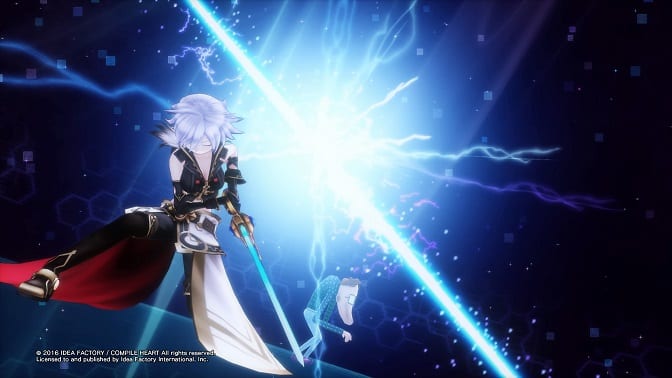 There’s something square-y familiar about her…

There have been a lot of Hyperdimension Neptunia games hitting the PlayStation Vita in recent years, but the newly released Megadimension Neptunia VII marks the series’ debut on PS4. Does the move to next gen push things forward, or do Idea Factory and Compile Heart keep things close to the vest? Time to stock up on pudding and prepare to get your ogle on as we find out.

In terms of gameplay, Megadimension seems nearly identical to Re;Birth 3. Once a battle is initiated all party members and enemies appear on the screen at once with combat progressing in turn-based fashion. Movement is limited to a certain area around each character with attack range based on the weapon they’re using. Attack combos are built off three types — rush, power and standard — that can be mixed and matched with new ones unlocked as you level up.

For added firepower each character has a set of abilities that can inflict more damage, buff your stats or heal at the cost of Skill Points. There are also Coupling and Formation attacks that see party members team up to do some serious damage. Coupling relates to how characters deploy, while Formation has to do with party position relative to the enemy.

While all of this is fun, it falls prey to the same issue as Re;Birth 3 — namely, that it’s difficult to aim your weapon in the tiny sweet spots that allow you to hit multiple enemies at once. On the Vita, the d-pad could be used for minor adjustments, here it’s the bumpers. It’s not debilitating, but it can be a bit cumbersome and results in a slower pace as you painstakingly try to line things up.

Once again combat is initiated in the overworld. If you strike the enemy, you unleash a “Symbol Attack,” which seems to be a fancy way of saying you go first. If they detect and contact you, they get to unleash the opening salvo. Depth perception made it easy to swing and miss on the Vita, but that’s lessened noticeably here on the big screen.

If you’re at all familiar with the series you know what to expect: fully animated battles and still images for all the dialogue (and there’s a lot of it). While the move to the PS4 may have cleaned things up, it’s not a stark difference from what we’ve experienced on the Vita. As usual, the game finds ways to flash peaks of the girls’ panties or breasts — hey, we just beat a monster, let’s shower together! It feels more silly than gratuitous, though no doubt it’ll offend some.

There are actually three intertwined stories spanning three dimensions in Megadimension Neptunia VII with things starting when Neptune and Nepgear get sucked into a portal created by a Sega Dreamcast they found and meet Uzume (Orange Heart), who’s the CPU of a crumbling world. Beyond the addition of a new CPU, the game hits mostly familiar notes: industry jokes, fourth-wall breaking and lots of long meandering conversations that are mostly silly.

Don’t let the tone throw you off the scent as this is a deeply involved and, at times, quite challenging title. It’s not unheard of to be defeated in a basic dungeon encounter — due in no small part to the fact that you’re never sure how many foes you’ll be facing from the overworld, which only shows a single enemy — and there are difficulty spikes as well that may force you to backtrack and do some grinding.

That’s a recurring theme in the Neptunia series, though it doesn’t feel nearly as unfair or arbitrary as it did with Re;Birth 3. In fact you may eventually find that things swing too much the other way and become relatively easy, leaving you to revel in the depth of content rather than the challenge.

Part of the reason for that is the game doesn’t do a great job of adequately explaining the ins and outs, leaving lots of important nuances to be deciphered via trial and error. Long-time players likely won’t have those troubles, but as this was just our second Neptunia game from the main line (Hyperdevotion Noire and Action Unleashed are one-offs) there was a definite learning curve.

We’ve bemoaned a lack of interesting enemies in the past and unfortunately Megadimension runs into the same trouble with some dungeons repeating almost verbatim as you move through the game’s three different stories. There are plenty of recycled enemy designs within its modest selection as well, which wears thin the longer you play.

Probably the biggest issue here, however, is pacing. Action segments are followed by lengthy talks, and then walking somewhere else and talking some more… and then probably more talking. There’s also a part that literally resets the leveling progress you’ve made as a story device multiple times, and it’s just as annoying as it sounds.

There’s nothing wrong with targeting a specific segment of the gaming community, and Megadimension Neptunia VII does just that. It’s a game for fans of the series, and despite being the series’ first entry on PS4, there’s no visible evidence anything was done to cater to newcomers. If you like Neptunia, this is a no brainer. Whereas if your curiosity has never been piqued by it, that’s unlikely to change, either.

By HC Green
Tags: Megadimension Neptunia VII, Video Game Review
This entry was posted on Tuesday, February 16th, 2016 at 1:23 am and is filed under Herija Green, Video Game Reviews. You can follow any responses to this entry through the RSS 2.0 feed. Both comments and pings are currently closed.