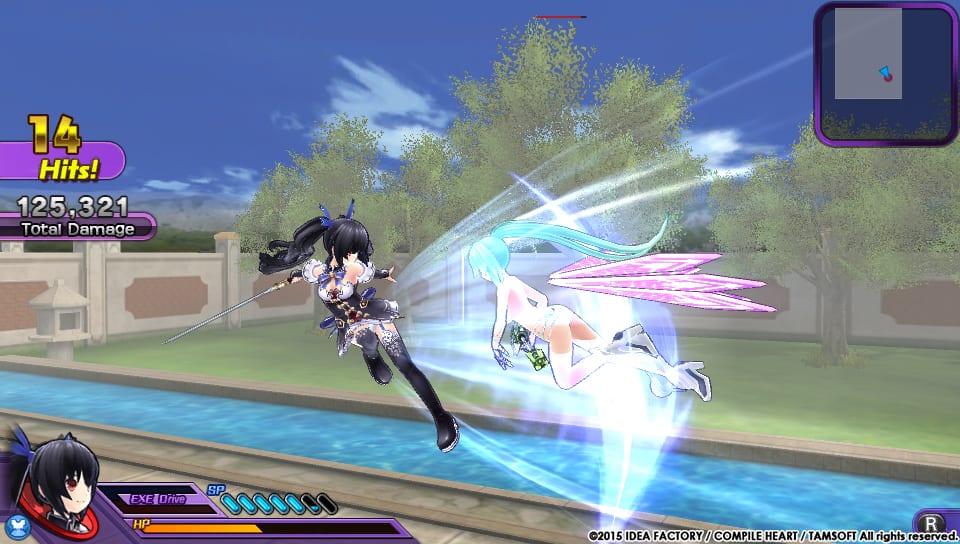 When last we visited with the likes of Neptunia, Noire and Vert’s breasts, the CPUs were following Noire in an effort to unite Gamarket in the Neptunia series’ one-off, Hyperdevotion Noire: Goddess Black Heart. While that featured chibi versions of the characters and turn-based strategic gameplay, the newest spinoff, Hyperdimension Neptunia U: Action Unleashed goes in a completely different direction with traditional character models and hack n’ slash action.

Put simply, if you can mash buttons you can play Action Unleashed. Your face buttons are used for a weak attack, strong attack, dash and jump (a second tap performs a double jump). Pressing the right bumper accesses your unique skills — you’ll start with two but learn a third one along the way — which can be used at the cost of SP. There’s a segmented meter along the bottom to track how much you have, and each skill expends a different amount.

Fighting enemies and taking damage also fills you and/or your partner’s EXE gauge. Once it passes a certain threshold you can transform into your HDD mode. Here you can deal more damage and just generally kick copious amounts of ass, though once the meter drains, time is up. Later on you’ll also gain access to a pair of special attacks that drain your EXE drive in exchange for a deadly attack. One you can use on your own, while the other involves your partner.

There isn’t a lot of tactical nuance to be found here as the vast majority of the time you’ll be wading through dozens of foes, hacking away and occasionally dashing out of danger. The camera handles reasonably well, and our only real complaint is that when holding the Vita it isn’t all that natural to seamlessly switch between regular and special attacks. This can disrupt combos, though that rarely has any adverse affects.

There are 10 characters available, all of which have unique move sets and animations. Enemy types will be familiar to series veterans, and they spend most of their time chasing you around and then waiting for you to cream them. There are a number of different environments, but they’re all confined to fairly small areas — larger levels are split up by gates that only come down after whatever section you’re currently fighting in is cleared of enemies.

It’s a pretty insulated presentation with loads of repetition, though the characters themselves are the visual highlight. They move smoothly and are customizable with different outfits, hair colours and weapons available. As usual, Hyperdimension Neptunia U blends cutesy dialogue and behaviour with not-so-subtle sexual undertones. Here, taking damage during battles degrades your current outfit until a “costume break” occurs, which is code for “now you’re fighting in your bra and panties.”

Voice acting is fine, as long as you’re willing to wade through the vapid dialogue and numerous innuendos about the nature of Vert and Nepgear’s relationship. It’s worse on the battlefield, however, as nearly every mission is so saturated with foes that you’re bound to use the same attack sequences thousands of times in a playthrough, each of which apparently has exactly one audio file to accompany it.

Some of the CPUs are less annoying than others, but we can’t even fathom how the sound effects won’t have worn out their welcome long before finishing the game.

Story is never the strongest aspect of the Hyperdimension titles, and it’s pushed even further into the background here with a loose setup of two Gamindustri journalists writing stories about the existing CPUs and the fledgling CPU Candidates. Basically, people fill out forms to request that quests be undertaken and the CPUs show how awesome and powerful they are by completing them. There’s a little more to it than that, but not much.

In fact, once you clear the opening salvo of dialogue and story you can go hours without getting an ounce of meaningful exposition. Instead, you fill the time by completing quests as they come available — some require use of a specific person or combo, but most of them allow you to select whichever two characters you’d like from the 10 on offer.

Combat in Hyperdimension Neptunia U is similar to the Dynasty Warriors series with dozens of enemies appearing at one time as little more than cannon fodder. Progression is done in two ways: you earn experience by defeating enemies and completing levels, and new items/boosts are unlocked by collecting medals from those vanquished foes. It’s a simple system designed to keep you grinding through battles again and again to acquire better weapons and equipment.

It can be addicting, but it’s also highly repetitive. With few exceptions, missions are cleared by defeating X number of enemies or toppling a boss… that only appears after you’ve defeated X number of enemies in the first place. A handful of low-level irregular quests pop up in which completion requirements are withheld, but there’s nothing particularly clever in those, and since they tend to not provide much experience or many medals there’s no compelling reason to replay them.

Action Unleashed also asks for a lot of grinding if you want to clear many of the post-boss levels, since these typically pair established characters with fledgling ones. Given that it takes a fairly healthy time investment to really buff up two or three, asking gamers to go back and build up the other seven if they want to clear the quest log feels like artificially lengthening the process.

While dramatically different from Hyperdevotion Noire, Hyperdimension Neptunia U: Action Unleashed is a lot of fun in its own way. Some of the longer quests — like clearing 1,500 enemies — don’t fit into the portable format as well as most others do, but for the most part this is the kind of game hack n’ slash fans can enjoy in 10-to-15 minute intervals.

By HC Green
Tags: Hyperdimension Neptunia
This entry was posted on Monday, June 8th, 2015 at 4:33 pm and is filed under Herija Green, Video Game Reviews. You can follow any responses to this entry through the RSS 2.0 feed. You can skip to the end and leave a response. Pinging is currently not allowed.