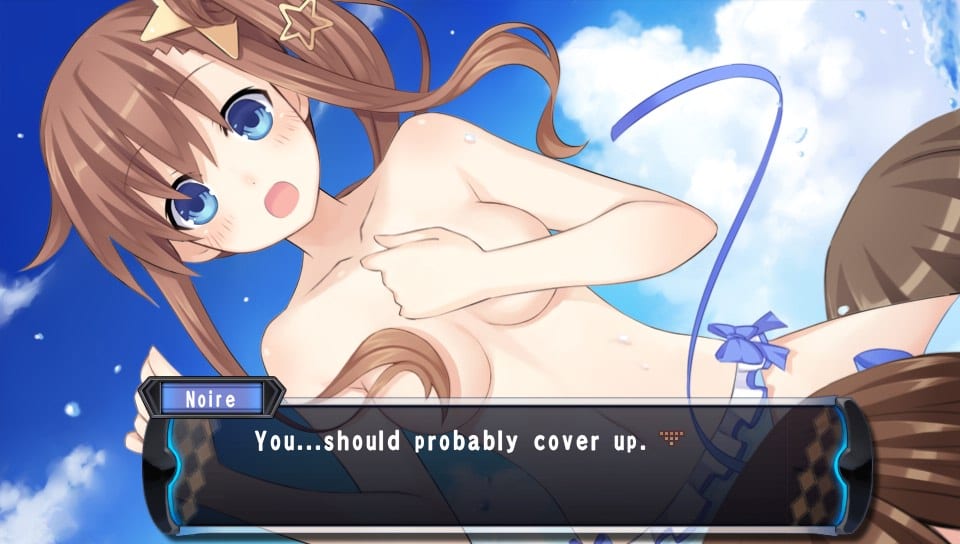 This about sums it up.

Daria. The Colbert Report. Better Call Saul. The world loves a good spinoff, right? Here to test that theory is Compile Heart and Idea Factory with Hyperdevotion Noire: Goddess Black Heart, a spinoff of its popular Hyperdimension Neptunia series. There are plenty of familiar faces, including Neptunia herself, but the gameplay is unique among its predecessors. Let’s see if straying from the formula creates something memorable or makes us long for the return of Neptunia.

Can you press the “X” button? If so, you’re uniquely qualified to play Hyperdevotion Noire. Every single dialogue box, whether vocalized or text based, ends with a prompt, requiring you to press “X” to advance — and if you tire of the pace at which words appear you’ll be pressing it again to speed things up. It’s certainly not the first game to do this, but that doesn’t make it less annoying during longer story sections.

Combat is turn based and relies primarily on the d-pad for movement and the face buttons to cycle through your characters and select/cancel actions. The analog stick allows you to move the camera around for a better view of the battlefield. It’s all easy to learn and execute.

There is a very pronounced split in the graphics department with the story featuring anime drawings of buxom young ladies in various stages of undress while the action sequences display “chibi” versions of these same characters. It’s a weird mix to say the least. While we weren’t offended by the shoehorning of overtly sexual situations the girls kept ending up in — they’re at least played for laughs — it’s safe to say that some people will avoid the title based on this objectification.

Full English voice acting is present, and the cutesy voices are out in full force. During lengthy dialogue sections it’s fairly well done, but the snippets found in combat can get pretty annoying, such as Neptune gleefully squealing, “I’m a kangaroo,” every single time she jumps (which can be multiple times per turn depending on the battleground). The soundtrack is pretty good.

There’s a macro plot in Goddess Black Heart in which Noire is close to establishing complete domination over the world of Gamarket before a mysterious stranger appears and offers her a chance to unite everyone without further conflict. It doesn’t go as anticipated, however, and Noire must seek the help of you, her secretary, and her three fellow Console Patron Units (CPUs), Neptune, Vert and Blanc to make things right.

Although that’s a fine setup, most of the moment-to-moment interaction has absolutely nothing to do with it and instead revolves around cutesy dialogue and ridiculous scenarios that inevitably lead to the CPUs fighting and subsequently recruiting their erstwhile generals. Oh, and once they’ve been recruited they engage in some sexually tinted escapade with Noire, whether that’s spying on her in the shower, entering a bikini contest, spending a night as a “hostess” and so on.

As mentioned earlier, these scenarios weren’t offensive to us, but they just seemed utterly pointless and did nothing but delay our return to the enjoyable part of the game: combat.

Being unabashed lovers of Final Fantasy Tactics and other games of that ilk, we readily embraced the turn-based combat of Hyperdevotion Noire. Beyond the genre standards of movement grids, special moves that draw from a pool of skills points, damage bumps when attacking from behind and enemies inflicting adverse statuses, Hyperdevotion also brings a few tricks of its own to the table.

Chief among them is “Lily Points,” (LP) which are earned by using a skill when a teammate(s) is occupying any of the four squares around your current character. Doing this causes any adjacent teammate to give you a “peck” on the cheek, amplifying the move’s potency and banking LP that can then be used to unleash ultra-powerful special attacks. It’s not groundbreaking, but it adds some strategy.

Progressing will add a lengthy list of available fighters to your roster, most (or perhaps all) of which are based on other video games. It starts with Lee-Fi, who is an obvious knock off of Street Fighter’s Chun Li, and Lid, based on the Metal Gear series, and expands exponentially with more than a dozen generals eventually joining your four CPUs. It’s great to have that kind of variety, though by the time some of the later additions came aboard we were pretty well set with our default team.

There are a couple of problems with the combat, however, led by a lack of diversity and creativity in the creatures you face, very few of which look even remotely threatening — sorry, but fighting the warp pipes from Super Mario Bros. isn’t that enthralling. Battles also tend to move at a methodical pace, especially when the computer has multiple pieces in play on a given turn.

In addition to story missions there are also a large number of sub-missions to tackle. These all play out the same, but sub-missions aren’t saddled with exposition. Other activities to partake in include crafting weapons and accessories, burning discs (which are then equipped for buffs), answering a series of odd requests from your constituents, decorating Noire’s pad and more. There’s certainly enough content to keep you busy for hours on end.

If only Hyperdevotion Noire: Goddess Black Heart had offered a more interesting, less flippant story it would’ve been an easy recommendation for us to give. Instead, strategy enthusiasts will have to wade through the tedium to get to the gameplay. Even still, it’s worth it.

By HC Green
Tags: Daria
This entry was posted on Saturday, March 7th, 2015 at 4:50 pm and is filed under Herija Green, Video Game Reviews. You can follow any responses to this entry through the RSS 2.0 feed. Both comments and pings are currently closed.