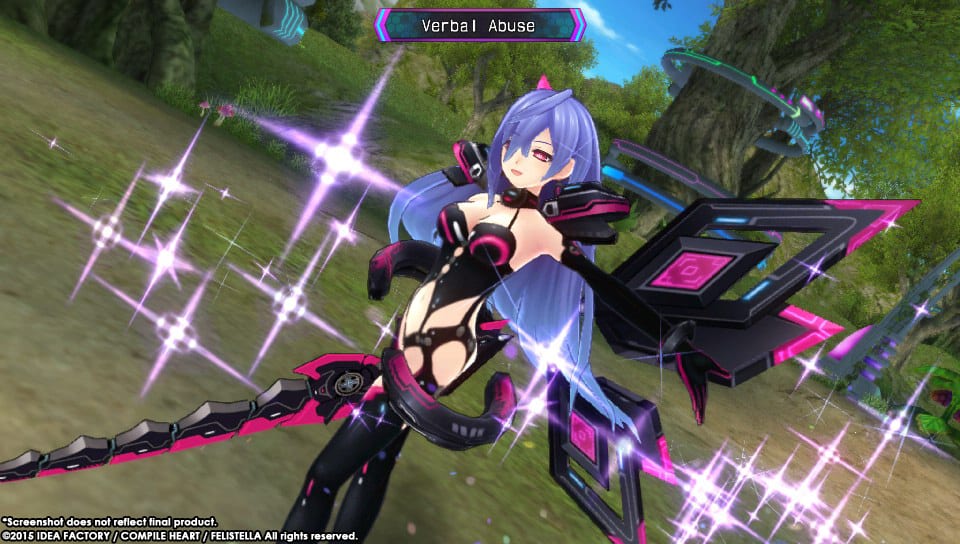 Who said words can never hurt you?

Despite having never previously played the Hyperdimension Neptunia series personally before, this marks the third consecutive release I’ve covered myself (in basically a four-month span no less). While all three titles retain core elements and characters, they’ve all been refreshingly different — Hyperdevotion Noire was turn-based strategy, Neptunia U was pure hack n’ slash and the latest, Hyperdimension Neptunia Re;Birth3: V Generation, adopts something decidedly more RPG oriented.

Battles in Re;Birth3 put all characters and monsters onto the screen at once, stick the order of attacks on the side of the screen and proceed in turn-based fashion. There’s no grid to determine movement, though, as you’re instead limited by a circle. Various weapons have different widths and ranges, and you highlight enemies to initiate an attack. These begin with a base strike before opening it up to allow three different types of strikes (fast, strong and armour breaking) in combination.

It’s a solid system, offering the opportunity for some customization in both tactical setup and execution, which keeps the characters from feeling too similar. There are a handful of fairly minor annoyances that dog the proceedings, however, led by a finicky camera. No matter which way we tweaked the settings (standard or inverted) we always seemed to be at odds with the view. In battles that doesn’t mean much, but when moving around in dungeons it can be an issue.

That’s because how combat starts determines initiative. Monsters roam around and fights break out when contact is made. If you nail them with your weapon you get to attack first. If they charge into you, they get first strike. Since depth perception is a frequent issue, however, you’ll miss out on initiating some battles by failing to connect on your swings.

Lastly, finding the tiny windows when your characters can strike multiple foes gets old quick. There’s no auto targeting system, so too much time is spent carefully making minute adjustments to your position and the angle of your attack. The ability to toggle through available targets could’ve really expedited the process and made combat a little snappier.

As usual, the story scenes use the same still images with occasionally changing expressions we’ve seen in previous Hyperdimension games. Whatever opinion you have of that style won’t change here. It is what it is. Action sequences are closer to Neptunia U with full-sized characters and enemies clashing in turn-based combat. There are some decent effects for the unique powerful attacks, but again there’s little difference between this and previous games in the series.

Ignoring the absurd content of much of the dialogue being delivered, the voice actors do a good job of playing their parts. At this point we’ve pretty much learned to accept the silliness — a blend of industry jokes and sexual innuendos — and just roll with it. Our only real complaint is that it can really drag on at times, which is more of a pacing issue. Music and sound effects are serviceable, though once again the repetitive in-game quips become annoying.

Although the mission structure remains familiar — complete quests, earn rewards, advance the story, etc. — the plot is different. This time Neptune gets caught in a space/time rift that transports her to an alternate dimension. It’s essentially the same world, but it’s an earlier time (Lastation and Leanbox both come into existence during the story arc) and none of the CPUs know who Neptune is. That allows for the introduction of a new CPU, Plutia, and plenty of old-school gaming references.

An overworld map is dotted with areas you can enter, and once you select one you’ll be on foot with monsters patrolling the various regions. Attacking or contacting them causes you to enter combat, which employs the aforementioned turn-based approach. It’s straightforward, though the game will mix in legendary creatures (they will not pursue you) and the appearance of “Viral” enemies. These are standard foes that turn mid-battle and become much more dangerous.

Speaking of danger, one of the problems with V Generation is its difficulty spikes, based in no small part on the seemingly arbitrary order system, which often allows the enemy to launch several attacks in a row without input from your four-person squad. That doesn’t much matter against lesser foes, but against tough ones and bosses it comes across as really unfair — there were battles in which we literally couldn’t heal our squad fast enough to avoid defeat.

Exacerbating that issue is the fact that some of your most potent offense (EXE) is character specific and locked behind lily ranks, which are extremely time consuming to level up. Plus, the game routinely shuffles characters in and out of your available party, so you may find some of your best attacks are unavailable in certain fights.

Although it takes quite a while, you’ll eventually have a sizable cast of characters to choose from, and you’re able to slot four into active combat and four more into coupling (support) roles. This opens up more strategic options. You’ll also be able to tweak several aspects of the gameplay via the Plans system to customize the challenge level, and a mini-game called Stella’s Dungeon is available to play as well for those that want to hunt for extra items.

Despite being a true sequel, Hyperdimension Neptunia Re;Birth3: V Generation isn’t as fun or interesting as Neptunia U or Hyperdevotion Noire. It’s still largely enjoyable, especially if you dig the referential gaming-related storyline, but it felt a little more generic that its counterparts.