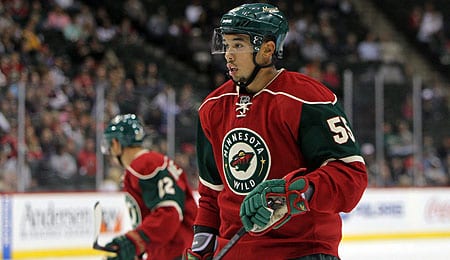 Matt Dumba is a bright spot for struggling Minnesota. (Thehockeywriters.com)

Have you ever seen an elite goal scorer in action? It is truly a beautiful, one-of-a-kind experience. Our NHL Editor had a chance to see arguably the greatest one in the game on Thursday as Alex Ovechkin put together his 14th career hat trick with three second period goals in a 4-3 win over the Minnesota Wild in St. Paul. It was truly a special moment, even if it was against our beloved Wild.

Matt Dumba, D, Minnesota Wild (ESPN: 16 per cent; CBS: 39 per cent): The Wild is in a full blown crisis, but there’s no question Dumba has been one of the few bright spots in recent games. The fifth of eight defensemen drafted in the top 10 of the 2012 NHL Entry Draft, Dumba is still developing, but his potential is beyond sky high.

An offensive-minded rearguard, Dumba sits tied with 2014-15 All-Star Ryan Suter for the team goal-scoring lead among defensemen with seven goals, his 17 points are third-best among Minnesota blue liners, while his five power play goals rank first and his 10 power play points rank second. What’s even more impressive is that Dumba is doing it all while averaging just 16:17 of ice time. Oh, did we mention that you better not have your head down around the Regina, Sask. native (see video below)?

In the past six games, Dumba has two goals, six points, a minus-1 rating, two penalty minutes, two power play goals, 19 shots on goal, eight hits and four blocked shots. With a change in coaching staff, the former seventh overall pick could see an expanded role in all game situations, making him even more valuable to Fantasy GMs.

Jean-Gabriel Pageau, C, Ottawa Senators (ESPN: 17.7 per cent; CBS: 14 per cent): Pageau has just 13 goals and 23 points this season, but he’s looked real sharp in recent games. In his past seven, the Sens pivot has two goals, seven points, a plus-4 rating, two penalty minutes, 14 shots on goal, 19 hits and five blocked shots. Will this hot streak continue? Probably not, but he’s certainly contributing in all Fantasy skater categories at the moment.

Dustin Brown, LW, Los Angeles Kings (ESPN: 11 per cent; CBS: 13 per cent): Captain King has been on fire recently with three goals, six points, a plus-4 rating, 18 shots on goal, 13 hits and one block in his past six contests. That said, Brown is a very streaky player who is at his best in a grinding, power, energy role. He has eight goals, 22 points, a minus-2 rating, and 20 penalty minutes in 54 games played this season.

Jay Bouwmeester, D, St. Louis Blues (ESPN: 23 per cent; CBS: 10 per cent): Bouwmeester is the ranking old timer on the Blues’ back end, but he’s still a vital piece, averaging a very respectable 23:01 of ice time. He’s not a huge Fantasy contributor, but should gain your attention with a solid goal, two points, a plus-1 rating, seven shots on goal, seven hits and eight blocked shots in his past five games. Bouwmeester has two goals, 14 points, a minus-1 rating, and 75 shots on goal in 53 games this season.

Ben Scrivens, G, Montreal Canadiens (ESPN: 41.4 per cent; CBS: 17 per cent): It appears there could be no return this season for Habs starting netminder Carey Price, which means journeyman Scrivens will be given every opportunity to assemble a respectable resume for potential teams to consider this offseason. Scrivens is doing a fine job of it in recent games, putting together three wins, a 2.03 goals against average and a .934 save percentage in his past four starts.

Fantasy Tip of the Week: We mentioned Benoit Pouliot last week, and boy, were we right! The former fourth overall pick has been lights out alongside Wayne Gretzky, uh, we mean, Connor McDavid and Jordan Eberle, collecting two goals, 10 points, a plus-4 rating, two penalty minutes, a power play goal, 13 shots on goal, six hits and four blocks in his past seven games. After years of very high draft picks, Edmonton may finally have the most dynamic line in all of hockey. Jump on Pouliot while you can.

By Dakota Case
Tags: Alex Ovechkin, Matt Dumba, Minnesota Wild, NHL
This entry was posted on Sunday, February 14th, 2016 at 2:14 pm and is filed under Dakota Case, HOCKEY, The Wire Troll. You can follow any responses to this entry through the RSS 2.0 feed. Both comments and pings are currently closed.