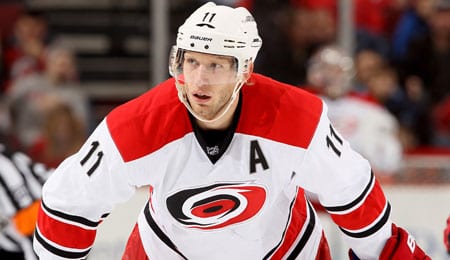 Jordan Staal has helped turned the Canes around. (Moviespix.com)

What a great week for hockey.

Not only has the men’s game seen the return of Connor McDavid (and it was beyond glorious), the women’s side also welcomed back an All-World talent in the form of USA Olympian and University of Minnesota Golden Gopher Amanda Kessel (younger sister of NHLer Phil Kessel) who has been out with serious concussion symptoms since participating in the Sochi Winter Olympics. With 101 points in her last full NCAA season, it’s not hard to figure out who will be the crown jewel of the CWHL/NWHL free agent pool this coming offseason.

On to this week’s picks.

Jordan Staal, C, Carolina Hurricanes (ESPN: 40.7 per cent; CBS: 23 per cent): The Hurricanes have turned their poor fortunes around in recent games, thanks in large part to the play of vets like Staal. In 53 games played, he has 12 goals (see video below), 30 points, a plus-7 rating and 95 shots on goal, including two goals, eight points, a plus-7 rating and 13 shots on goal in his past six games. Board up your homes and businesses, because there’s more than just a tropical storm brewing in the Carolinas.

Benoit Pouliot, LW, Edmonton Oilers (ESPN: 5.1 per cent; CBS: 26 per cent): Did you miss out on snatching up McDavid? No problem… scoop up his linemate instead. In two games since McDavid’s return, Pouliot’s production has soared with a goal, four points, a plus-2 rating and five shots on goal in that span. A very streaky player, Pouliot developed serious chemistry with the newest face of the NHL earlier this season, but McDavid will also see serious time with Jordan Eberle. An 11-goal, 26-point scorer thus far this season, Pouliot is worth a spot on Fantasy rosters as long as he continues to see considerable time alongside McDavid.

Travis Hamonic, D, New York Islanders (ESPN: 44.3 per cent; CBS: 40 per cent): A stay-at-home defenseman, Hamonic has been a fixture in the trade rumour mill all season long. An injury kept him on the shelf for a number of games, but he’s been solid in his return with a goal, four points, a plus-3 rating, 13 shots on goal, five hits and seven blocked shots in his past four games. In total, Hamonic has three goals, 12 points, a plus-3 rating and 94 shots on goal in 45 games played this season, while averaging 23:45 of action. While not a huge Fantasy contributor, he’ll do as a bench player for sure.

By Dakota Case
Tags: Jordan Staal
This entry was posted on Sunday, February 7th, 2016 at 3:19 pm and is filed under Dakota Case, HOCKEY, The Wire Troll. You can follow any responses to this entry through the RSS 2.0 feed. Both comments and pings are currently closed.