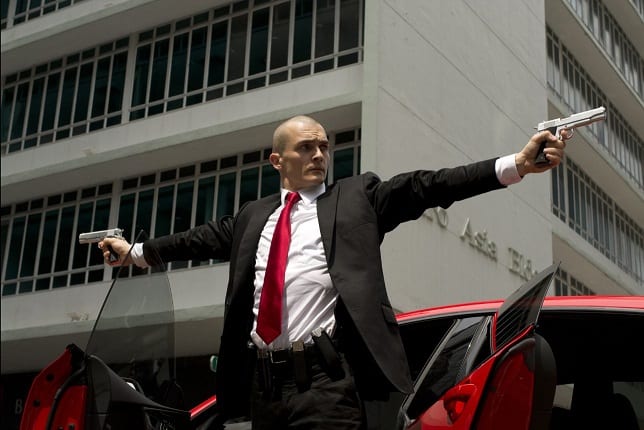 Want a short list? Make one for films based on video games that were good. Mortal Kombat was pretty fun (the sequel is abysmal), Need for Speed had good driving, Tomb Raider had Angelina Jolie and the Resident Evil films are eminently watchable. They all have their faults, however, even if they do represent the upper crust of crossovers.

Our next entrant into the fray is Hitman: Agent 47, a reboot of the 2007 film starring Timothy Olyphant that was originally set to feature the late Paul Walker in the title role. It’s time to see if the second effort to launch a Hitman film franchise was more successful than the first.

While Agent 47 dispenses with the clone storyline of the game series, it maintains the genetically enhanced angle. Here, Agent 47 is the result of a program devised by Dr. Litvenko, a Russian geneticist that disappeared during the implementation of the Agent project. His departure took the secrets to making the program work with him, and subsequent efforts to duplicate his results have failed.

These failures have made locating Litvenko of utmost importance even after more than a decade, and there appears to be no shortage of interested parties. Chief among being Agent 47 (Rupert Friend), on behalf of the ICA, and John Smith (Zachary Quinto) fronting the Syndicate.

Everyone believes the key to finding Litvenko is through his daughter, Katia (Hannah Ware), who has some sort of heightened sense that allows her to identify danger before it happens. She’s also able to track down her father, who she does not remember, for reasons that appear unclear to her.

Now she’ll need to employ her skills to determine not just her father’s location, but also who’s looking to help her, and who’s simply using her for their own gains… not to mention where exactly do Smith and 47 fit into this equation.

Despite not being in the spirit of the game’s stealth-heavy roots, Agent 47 is at its best when 47 and, to a lesser extent, Smith are going balls out trying to put one another in the ground. The hand-to-hand combat is enjoyable, but the “gun-fu” is the film’s high point. While it’s not as raw as John Wick or as stylized as Kingsman, the smoothness with which one headshot flows into the next has an almost hypnotic quality to it.

Friend won’t be getting an Oscar nomination for his work as Agent 47, but he does a respectable job with what he’s given. The film actually flips its presentation of him along the way, and the early moments feel almost akin to the Terminator/Kyle Reese dynamic seen in the original Terminator. No, we’re not suggesting it’s on par with the sci-fi classic. It just creates that same sort of hunter/hunted vibe.

Video games turned movies often make significant concessions during the transition. Perhaps the worst example is the atrocious Super Mario Bros. film with Bob Hoskins. Agent 47 doesn’t butcher the Hitman fiction as badly as that, but there’s still a lot of liberties taken from what we’ve been playing for better than a decade in Square-Enix’s vision. At best, the movie works a handful of nods (47’s outfit, his dual-wielded pistols, the garrote, changing outfits, etc.) into its Bourne-esque action.

Other than Friend, the performances range from underwhelming (Ware) to underused with two actors we generally enjoy, Quinto and Ciaran Hinds (Mance Rayder from Game of Thrones), being given very little to do. When the movie tries to build up emotional attachments it comes across as clunky, and you’ll just be waiting for the next gunshot to ring out.

There are a lot of eye-rolling moments here as well, such as the bulletproof skin (nano!) that makes one character nigh indestructible or the magical inhaler that somehow effectively treats the symptoms of advanced lung cancer. These aren’t limited to gadgetry, either, as a couple of the “plot twists” are sure to induce involuntary head shaking.

One last item worth mentioning: product placement is in tons of movies. Tons. That being said, we’re not sure if there’s ever been one more blatant than Audi in Agent 47. Its usage is about as subtle as 47 opening fire in a crowded train station.

As action buffs, we can’t mark off Hitman: Agent 47 as a total loss, but if you want things like compelling dialogue and a meaningful plot you’re looking in the wrong place.

By HC Green
Tags: Agent 47, Blu-ray reviews, Hitman
This entry was posted on Thursday, January 21st, 2016 at 1:40 am and is filed under Herija Green, Movie Reviews. You can follow any responses to this entry through the RSS 2.0 feed. Both comments and pings are currently closed.