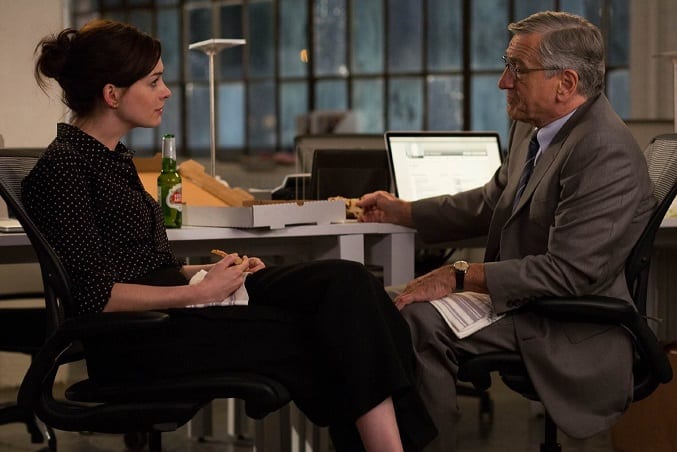 Pizza and beer. Bridging generation gaps since the 1900s.

There’s no denying Robert De Niro’s place in American cinema is secure. It doesn’t matter how many forgettable performances he has tacked onto his filmography over the last decade-plus, he’s still Al Capone (The Untouchables), Jack Walsh (Midnight Run), Max Cady (Cape Fear), Neil McCauley (Heat), Ace Rothstein (Casino) and so on.

His latest effort finds him opposite Anne Hathaway in Nancy Meyers’ The Intern. Is it another by-the-numbers comedy for the 72-year-old De Niro or does he conjure up some of the juice that made him such an institution in Hollywood? Let’s find out.

Widowed for nearly a decade, Ben (De Niro) finds that the unstructured nature of retirement doesn’t suit him, and he creates reasons to maintain a schedule. He feels he still has more to offer, however, and when he comes across a flyer from a dot com implementing a senior intern program Ben throws his hat into the ring and is brought on board.

It’s here that he meets Jules (Hathaway), whose startup, About the Fit, has grown exponentially and may now have too many facets for her to successfully manage them all. She bikes from one meeting to the next, can’t recall green-lighting the senior program and isn’t spending enough with her husband (Anders Holm) and daughter.

As such, the suddenly booming company is being pressured by its investors to hire someone from outside to become the new CEO — a level of power Jules is hesitant to relinquish. Her search adds another layer of stress, and the assignment of Ben to be her personal intern is met with resistance as she prefers to handle things personally.

It takes a little while, but Ben is soon able to prove his value to Jules, though her private nature makes her wary of letting him in too far, too soon. It’s up to her, with Ben’s help, to weigh the pros and cons of hiring a CEO while also trying to balance her home life.

In some ways, Hathaway is playing a more successful and independent version of the character she played in The Devil Wears Prada. She handles the role seamlessly and looks the part of a fashion-forward professional. Her chemistry with De Niro is good, and even though she has the success that probably should make you at least a little jealous she manages not to flaunt it.

Make no mistake, this movie is all about De Niro and Hathaway, but there are a number of enjoyable secondary roles. Adam DeVine (the “manny” from Modern Family) and Zach Pearlman are given the choicest material, though they leave some for Jason Orley, making his acting debut, and Christina Scherer as Hathaway’s overworked assistant.

There isn’t a lot of substance in The Intern. It’s essentially a romantic comedy without the romance, and most of the struggles the characters surmount aren’t relatable — we don’t know about you, but whether or not to hire a CEO for our uber-successful website hasn’t come up. There’s a secondary, more personal storyline to potentially invest in, though it’s wrapped up so quickly and cleanly that anyone that has ever been through something like that is likely to do some serious eye rolling.

We didn’t really care for Matt, Julie’s husband/stay-at-home father to their daughter. His character is just a little too much with the way he interacts with people, especially his kid. We’re parents. We know lots of other parents, and those kinds of “look how perfectly I relate to my witty child” scenarios only exist in movies like this. Also, that beard…

A whopping three special features, covering no more than 20 minutes collectively, make up the entirety of the Blu-ray’s offerings. About the only things we were able to glean from them is that De Niro is a really cool person to work with, and Orley functioned in some administrative capacity for Meyers before being given the chance to appear in the film. You won’t be revisiting these for their insight.

Even though The Intern isn’t the type of movie that’ll stay with you, it’s surprisingly enjoyable, and that’s coming from someone that doesn’t generally like these kinds of films.

By HC Green
Tags: Anne Hathaway, Blu-ray reviews, Robert De Niro, The Intern
This entry was posted on Monday, January 18th, 2016 at 3:44 am and is filed under Herija Green, Movie Reviews. You can follow any responses to this entry through the RSS 2.0 feed. Both comments and pings are currently closed.