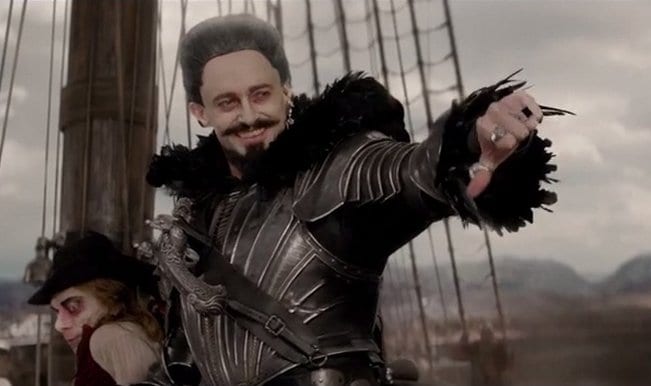 For all the adaptations of J.M. Barrie’s Peter Pan that have come and gone over the years, we’ve only seen one in its entirety: Disney’s animated 1953 version. We tried to watch Hook, the Dustin Hoffman/Robin Williams film, but it didn’t take. We write these things to convey our relative ignorance with the fiction, even though director Joe Wright’s Pan serves as a prequel to Barrie’s work. Now let’s see if it provides a successful launching point for future installments.

As noted, Pan is set before Barrie’s vision, and here we find young Peter (Levi Miller) languishing in an orphanage located in WWII-era London under the watchful eye of Mother Barnabas. Despite the name, Barnabas is no friend to the orphans, and when Peter and his friend Nibs seek the truth of their situation they run afoul of the Mother.

As retribution, Barnabas summons a gang of pirates to abduct the orphans on a flying ship that must evade British fighter pilots before escaping to Neverland. It’s here that Peter encounters Blackbeard (Hugh Jackman), who oversees a massive mining operation, that collects fairy dust to keep the ancient pirate young, and a fellow prisoner/miner, James Hook (Garrett Hedlund).

It doesn’t take Peter long to run afoul of Blackbeard’s cronies, and he’s forced to walk the plank, resulting in a surprising revelation: he can fly. Hook sees this and dreams of escape, while Blackbeard views it as the manifestation of a prophecy that a flying boy would kill him. Shortly thereafter Peter and Hook commandeer a flying ship to escape into the forest where the mysterious natives dwell.

Peter and Hook must work together to keep one step ahead of Blackbeard, who is hunting both Peter and the natives, while also trying to determine if Peter is indeed the prophesized Pan.

Through his many action films, most notably his long-running turn as Wolverine, Jackman has built up a lot of good will with fans, us included. And while this isn’t one of his stronger roles, the veteran actor certainly seems to be having fun playing the manic Blackbeard — teetering on the brink of insanity one moment and relatively normal the next. He does what he can with the role.

Visually, the melding of fantasy and Steampunk creates a unique look. Not all of the sets and creatures are hits — I didn’t care for the creepily cartoonish “Neverbirds” — but the world of Neverland itself is probably the film’s most interesting and engaging aspect.

There are some clever winks and nods to future events in Pan, many of which we missed initially but were suitably impressed by after watching the special features. One we did get on the initial viewing was Hook lazily letting his hand drag through crocodile-infested waters.

Upon Peter’s arrival, Blackbeard and his miners engage in a rousing rendition of Nirvana’s Smells Like Teen Spirit. Why are they singing a ’90s track in the early-to-mid ’40s? Who knows? Later on they get together to belt out Blitzkreig Bop (Ramones). Our son offhandedly told us it’s because “time doesn’t exist in Neverland,” but since that’s never even mentioned in the film we have no idea if that’s the reasoning behind those scenes. It’s just bizarre.

In fact, if we were going to use one word to describe Pan that would be it: bizarre. The orphanage scene ripped straight from Oliver Twist, the pirates descending through the roof to grab the children looks like something from Fury Road, the Natives being re-imagined as some sort of multicultural circus in which, despite the diversity of the extras, all the main Natives are white and so on.

Deserving of special mention is Hedlund’s voice. We have no idea what he thought he was doing, but it sounds like he delivered all his lines with a bad Jimmy Stewart impression. It’s basically impossible to take him seriously talking like that.

Last, but certainly not least, Pan suffers from a major identity crisis. While it’s rated PG and has a child in the lead role, it doesn’t feel like a kid’s movie. Blackbeard and company kill a lot of people, even if they do explode into puffs of colourful chalk, and the CGI-heavy final act centres on a whole bunch of fairy violence. Again, bizarre.

There’s not a lot to sink your teeth into with the bonus features, which are mostly fluff about how great it was for Actor X to work with Actor Y. Never Grow Up is the best of an uninspired lot, and it actually does a pretty solid job of explaining some of intersections between Pan and Barrie’s story.

Strange films aren’t inherently bad, but Pan seems to be flying without a compass (insert your “second star to the right” joke here) as it’s just all over the map in so many ways. While Jackman does what he can, ultimately he’s unable to right the ship.

By HC Green
Tags: Blu-ray reviews, Hugh Jackman, Pan, Peter Pan
This entry was posted on Monday, December 21st, 2015 at 6:00 pm and is filed under Herija Green, Movie Reviews. You can follow any responses to this entry through the RSS 2.0 feed. Both comments and pings are currently closed.