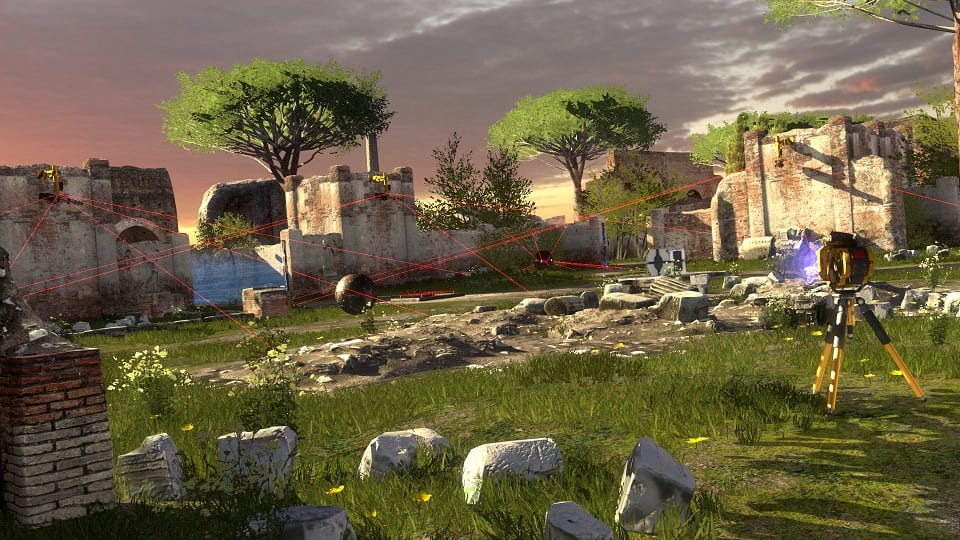 Something tells us we should avoid those red beamy things.

If you’ve noticed The Talos Principle on your PS4 store with covert art of a robot holding a kitten and wondered what exactly that’s about, don’t look it up — the story is too rich to give away. Just know that it’s a puzzle/adventure game built for fans of Portal, albeit one with a more philosophical sci-fi bent.

Much of The Talos Principle involves wandering around walled environments, which means its first-person navigation is rudimentary at best. It actually feels a little loose and imprecise, though puzzles only require a small amount of timing challenges, so this hardly ever hinders gameplay (L2 is used to run, which helps when you need speed).

Puzzles are solved by moving world objects around, and that’s handled by simply grabbing them using the targeting reticule and applying it with the same reticule.

Most of the art style for The Talos Principle involves stark landscapes. It’s well rendered and there’s obvious care in the details of this Myst-like environment, but it’s also clear why this was released on various operating systems (including Android) before reaching the modern console generation on PS4. Lighting is its most impressive aspect, from the way the sunlight interacts with the buildings and trees to the way the outside light comes in windows.

The general vibe you’ll get from the visuals is Myst meets I, Robot. In fact, the robot units are the most detailed of any renders, though you won’t see them that much. As the world you work in is a simulation, you’ll also see purposeful glitches appear from time to time, which helps mask the occasional controller lag or clipping that occurs.

Like Portal, puzzles arrive in areas, though The Talos Principle presents them as more sectioned and organized. Each puzzle awards you a sigil, which looks like a Tetris piece. Gather enough of these and you can unlock another group of puzzles in a new area, each of which represents a simulated environment from human history.

You’ll need to get through some real mindbenders, which ramp up in difficulty quite quickly. Like Portal, many of these puzzles start with you assessing your environmental options and current abilities, with the solution stemming from a combination of lateral thinking, combining abilities and timing.

Abilities accrue over time, starting out by simple on/off jamming of various devices to further elements involving viewing recordings of yourself and manipulating light. This builds gradually. some of which are simply to unlock a mechanic, and some require a lot of lateral thinking in order to combine mechanics into a single solution — similar to the way some Portal 2 puzzles combined absolutely everything you’d learned along the way into one mega-puzzle.

The less said about the story, the better. The only thing we’ll really divulge is that things are not necessarily what they seem, and it’s probably the closest a game story has come to classic hard science fiction in a while. Much of this is done through computer terminal access, a la Fallout. If you know rudimentary DOS or Linux commands, you’ll find some of the interface to be familiar.

While the story does not necessarily drive the puzzles, it provides a level of context and intrigue for the gameplay, melding the smart design into a gripping narrative. The result is one of the most engrossing games in the adventure/puzzle genre in years.

Note that the PS4’s Deluxe Edition comes with the Road to Gehenna DLC, which acts as a bit of side story/prequel to the main game. This should only be played after completing the main story line.

By Mike Chen
Tags: The Talos Principle, Video Game Review
This entry was posted on Monday, December 14th, 2015 at 12:29 am and is filed under Mike Chen, Video Game Reviews. You can follow any responses to this entry through the RSS 2.0 feed. Both comments and pings are currently closed.