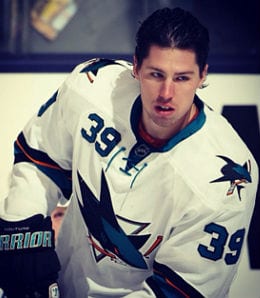 Nearly as soon as he returned, Logan Couture was back out. (Twitter)

This week, we have injury news on Logan Couture, Ondrej Palat and Kris Letang… wait, we feel like we’ve typed these names before…

Logan Couture, C, San Jose Sharks: Couture will miss at least the next five games because of a lower-body injury.

And just like that, Couture’s back on the injured reserve and won’t be able to help the Sharks, who — despite also missing Tomas Hertl (lower-body, game-time decision on Thursday) — finally snapped their six-game losing streak on Tuesday. When he finally does return, hopefully he’ll steer clear of Dustin Brown (see video below).

Adam Henrique, C, New Jersey Devils: Henrique was able to return to the lineup Tuesday after missing two games with a lower-body injury. As the Devils fight to hold onto a wild card spot, having him healthy is vital for this team.

Martin Hanzal, C, Arizona Coyotes: Hanzal is day-to-day with a lower-body injury. The fact that he was able to practice on Monday bodes well for a return when eligible on Thursday.

Beau Bennett, RW, Pittsburgh Penguins: After suffering an upper-body injury thanks to a questionable hit by Washington’s T.J. Oshie, Bennett will be sidelined for 4-to-6 weeks.

How did we know Bennett would get hurt? He was just starting to heat up and had even been playing on the top line with Sidney Crosby and Chris Kunitz. Bennett keeps proving he can’t stay healthy and it will be hard for him to reclaim his spot on the No. 1 line when he returns in a few weeks.

Jaromir Jagr, RW, Florida Panthers: Jagr missed Tuesday’s game because of the flu and is day-to-day.

David Clarkson, RW, Columbus Blue Jackets: Even though Clarkson left Saturday’s game early, he was able to play in Monday’s contest. Remember that he returned from a back woe less than a week ago.

Ondrej Palat, LW, Tampa Bay Lightning: Palat will not play during the Lightning’s upcoming three-game road trip because of a lower-body injury.

Kris Letang, D, Pittsburgh Penguins: Letang will miss two weeks with an upper-body injury, yet another blow to a Penguins squad that has fired its coach yet is still bleeding and in free fall in the standings.

Letang’s injury further decimates the Penguins’ defense and could even hurt the forwards production. Who’s going to get Crosby the puck to score? Ben Lovejoy? Ian Cole? It’s possible that Olli Maata or Trevor Daley benefits from the injury because someone has to take Letang’s ice time, but we wouldn’t expect much of an increase. Even if Maata or Daley take over Letang’s spot on the powerplay, it’s not like the old Pittsburgh powerplay that teams would be scared of.

The Pens are only converting 15 per cent of their chances, 28th in the league.

Oscar Klefbom, D, Edmonton Oilers: Klefbom will be out of the lineup indefinitely after fracturing his finger in a game against the Rangers.

Dan Hamhuis, D, Vancouver Canucks: It isn’t known yet how long Hamhuis will be injured after having surgery to repair a facial fracture.

Even though Smith will miss a lot of games, we don’t think his injury will create Fantasy help for anyone. It definitely doesn’t help Smith owners and we wouldn’t want to start either of the Coyotes other options in goal — Anders Lindback or Louis Domingue. The Coyotes have been okay this season as a team but Smith was only able to post a .901 save percentage and a 3.06 GAA. We don’t think Lindback or Domingue can do much better and they probably won’t provide much Fantasy value.

We’d suggest adding almost any other goalie (Darcy Kuemper, for instance) before picking up either one of them.

Sergei Bobrovsky, G, Columbus Blue Jackets: Bobrovsky was placed on injured reserve because of a lower-body injury that will keep him on the shelf for about three weeks.

This is the same situation as Smith above. The Jackets don’t have much goaltending depth after Bobrovsky and they haven’t even been winning games (just once in their last eight). Besides, it’s not like Curtis McElhinney is going to give you a good save percentage.

Marc-Andre Fleury, G, Pittsburgh Penguins: Fleury has a concussion and will miss the next week or two.

It only makes sense that one of the few players that has been playing well for the Penguins gets injured. Fleury is having a great season, posting a .925 save percentage and a 2.29 GAA. Luckily for Pittsburgh, he should only be out of the lineup for a few games but until then, Jeff Zatkoff will probably get most of the starts. He should be able to get some wins during Fleury’s absence and provide nice short-term Fantasy value.

Now it’s your turn. Let us know in the comments below which injuries have nailed your Fantasy team and how you’re combating them.

By Scott Maran
Tags: Beau Bennett, Kris Letang, Logan Couture, Ondrej Palat, San Jose Sharks, Tomas Hertl
This entry was posted on Wednesday, December 16th, 2015 at 5:12 pm and is filed under HOCKEY, Hockey Hospital, Scott Maran. You can follow any responses to this entry through the RSS 2.0 feed. Both comments and pings are currently closed.