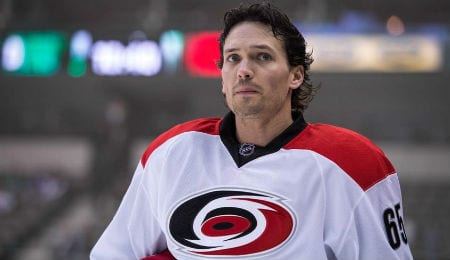 It’s been another exciting week in the National Hockey League. Chicago Blackhawks winger Patrick Kane extended his point-scoring streak to 25 games, and the Florida Panthers’ ageless Jaromir Jagr scored the 731st goal of his NHL career to tie Marcel Dionne for fourth-best in league history.

The biggest news this weekend would no doubt be the sudden canning of Pittsburgh Penguins Head Coach Mike Johnston, and assistant coach Gary Agnew, which was announced on Saturday morning, and a story we covered extensively that very day. Former Wilkes-Barre/Scranton Penguins head coach Mike Sullivan has been named head bench boss in his stead.

Still, there are some good signs on the Consol Energy Center ice. Sidney Crosby and Evgeni Malkin have been heating up, but it’s a defenseman that makes our list today. Check out this week’s FTOTW below for more information.

Ron Hainsey, D, Carolina Hurricanes (ESPN: 17.9 per cent; CBS: 4 per cent): The ‘Canes may be hot on the trail of top ’16 phenom Auston Matthews, but don’t tell Hainsey that. In four games played in the past seven days, the veteran has a goal, five points, a plus-4 rating, nine penalty minutes (check out his fight with Ryan Getzlaf on Friday in the video below), three shots on goal, nine hits and 10 blocks. That said, keep in mind that he only has three goals, 11 points, a minus-9 rating and 15 penalty minutes while skating a game average of 22:01.

Jeff Skinner, LW, Carolina Hurricanes (ESPN: 41.3 per cent; CBS: 34 per cent): Skinner may just have 13 points on the season, but he does have 11 goals, including six scored in the past seven days. In that span, he’s also added a plus-4 rating, a power play goal, and 10 shots on net. The former seventh overall pick is a likely candidate for a move out of North Carolina, and, like NHL GMs, you might want to jump on him now while he’s hot.

Niklas Hjalmarsson, D, Chicago Blackhawks (ESPN: 16.9 per cent; CBS: 17 per cent): While Brent Seabrook and particularly Duncan Keith tend to get all the Fantasy glory on Chicago’s blueline, Hjalmarsson is the next best thing, especially in the extra categories. In the past seven days, the Swede has three assists, a plus-4 rating, four shots on goal, two hits and 11 blocked shots. He has a goal, nine points, a plus-2 rating and 12 minutes while averaging 22:00 per game. There are better offensive options for your Fantasy defensive corps available in free agency, but he’ll contribute in other categories.

Brayden Schenn, C/LW, Philadelphia Flyers (ESPN: 17.6 per cent; CBS: 39 per cent): The younger Schenn brother has been on a bit of a roll recently, notching four assists, a plus-1 rating, nine penalty minutes, 13 shots on goal, 13 hits and a block in the last week. As you can see, he’s been a big contributor in many categories. Schenn has six goals, 14 points, a minus-4 rating and 15 penalty minutes on the season.

Garret Sparks, G, Toronto Maple Leafs (ESPN: 8.1 per cent; CBS: 14 per cent): Jonathan Bernier should be returning any day now after a conditioning stint with the Marlies, but Sparks has been darn near outstanding in his stead with the big club. Twenty-two-year-old rookie Sparks has a 3-1-0 record, a 2.20 goals against average, a .921 save percentage and a shutout on the season, including two wins, a 1.44 goals against average and a .945 save percentage in two games in the past seven days. He’ll likely be returned to the minors once Bernier returns, but you might want to go ahead and consider stowing Sparks away on your roster if you’re in a keeper league.

Want to know a little more about Sparks? Then be sure to read Scott Maran’s latest Hockey Hospital piece for more information.

Fantasy Tip of the Week: He’s a little too popular (owned in 59 per cent of CBS Fantasy leagues, but just 29.2 per cent in ESPN) to include in our regular WT segment, but Pens rearguard Olli Maatta is heating up with two goals, four points, a plus-1 rating, two penalty minutes, six shots on goal, four hits and six blocked shots in four games over the past seven days. He has four goals, eight points, a plus-9 rating and six penalty minutes this season while skating 17:01 per game, and could be a considerable addition for your Fantasy team.

Another candidate who didn’t quite make the cut is Chicago forward Teuvo Teravainen (52 per cent in CBS; just 17.3 per cent in ESPN). He has two goals, four points, seven shots on goal, four hits and two blocks in his past four games. Keep your eyes on this one.

By Dakota Case
Tags: Carolina Hurricanes, Chicago Blackhawks, National Hockey League, Patrick Kane, Pittsburgh Penguins, Ron Hainsey
This entry was posted on Sunday, December 13th, 2015 at 6:59 pm and is filed under Dakota Case, HOCKEY, The Wire Troll. You can follow any responses to this entry through the RSS 2.0 feed. Both comments and pings are currently closed.