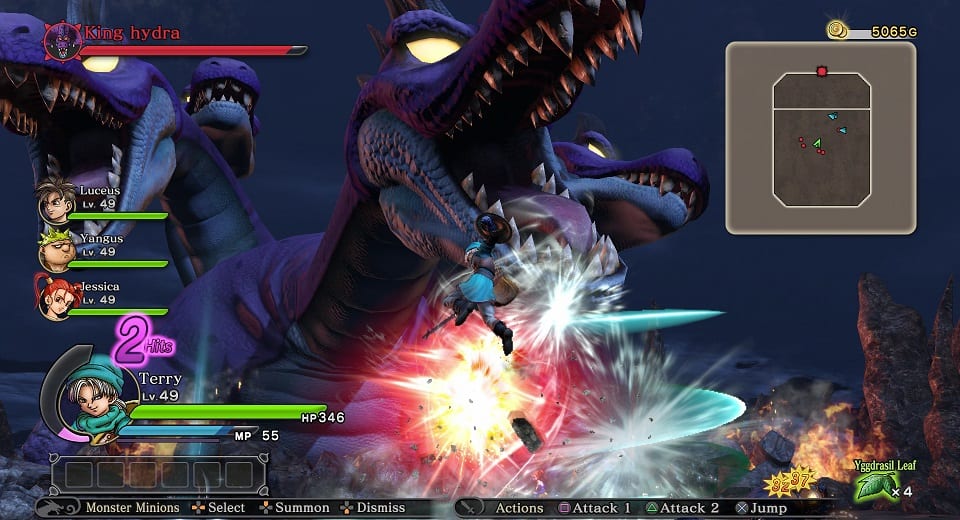 Not just any hydra, King Hydra!!!

The Dragon Quest series has always been enormously popular in Japan but has struggled in the West. With the release of Dragon Quest Heroes: The World Tree’s Woe and the Blight Below, a collaboration between Square-Enix and Koei-Tecmo, the franchise makes its debut on western PCs with a spin-off action RPG. Can the title remain appealing despite heavy fan service to a series with somewhat random releases?

Dragon Quest Heroes is a Musou from Omega Force, most famously known for the Dynasty Warriors series. If you’ve played any in the past few years, you’ll be quickly up to speed. Each character controls a bit differently, but the basics of light and strong attacks in short combo strings are the bread and butter of combat.

There’s also a dodge roll, blocking and spells to use on the hordes of enemies coming your way. While these moves look great and feel flashy, they also tend to be a bit limited and repetitive. For those seeking a more relaxed experience there’s a control mode that automates a lot of the combos and spells to what works best in the situation.

Legendary artist Akira Toriyama, most famous for his work on Dragonball Z, has been the primary steward for Dragon Quest’s visual identity since its inception. His character and monster designs translate well to the high-definition 3D realm. The action is colourful and cartoonish, offering a nice distinction from many other large-scale action games.

Spells and finishers are flashy, in fact, sometimes a bit too much. Some fights become incredibly visually chaotic, making it hard to spot timed loot drops or even incoming attacks.

Joining Toriyama in working on the game is series mainstay composer Koichi Sugiyama. His tunes are nostalgic and warm. The game’s nature, featuring large-scale warfare, suits some of his songs that feel almost like they are commanding you to march.

Characters are voice acted, though only in main story moments and general battle chatter. The acting is fun all around, with most being fairly over the top, but it works with the colourful atmosphere of the game.

Monsters and humans live in perfect harmony in Dragon Quest Heroes before something happens at the start of the plot to turn monsters crazy. It’s up to us to find out why, while obliterating scores of them along the way. As the journey takes the party around the world, they’ll stumble upon a variety of guest stars from other Dragon Quest games that have found themselves in this new world for a variety of reasons.

The story is fairly simple but takes up a surprising amount of time in the game. Players can choose one of two leads: the strategic Luceus or the impatient Aurora. For the most part these two are very similar in play style, only really differing in that one has a fire attack while the other employs ice.

Two other original characters join with the rest coming from previous games. Even big JRPG players may have trouble recognizing some of them, with many from games that didn’t initially come out in the West. That being said, most of them have unique enough personalities to be enjoyable outside of a fan service context.

The struggle in each level then becomes about figuring out a good balance of staying put and defending and clearing out Mawkeepers, a special enemy type that opens portals to summon monsters so you don’t get overwhelmed. One of the concepts that set this game apart from other Musou, however, is the introduction of a rudimentary tower-defense mechanic.

As you defeat enemies, they will sometimes drop coins bearing their visage — many of which summon the monster to fight for you. So, for example, you can plug up a hole with a golem and hope he fends enemies off while you go do more important things.

Many RPG elements are present. Before each mission you’ll be able to explore a hub area that’s full of NPCs, vendors and the occasional quest. Each character levels up and can be tailored with stats boosts or ability tweaks, such as one that’ll allow holding the button for an attack to deliver a more powerful version. There’s also loads of gear and feats to grind after.

And grind you will. One of the biggest issues with the game is that there’s so much stuff to collect that is based on random chance. Even midway through the game we were struggling to find crafting materials for basic recipes found early on.

Heroes seems to expect you to revisit things quite a bit, with a lot of the early optional content basically just being previous levels or boss fights repeated. We received one side-quest several hours in that required killing 200 slimes, a monster that is long gone from enemy pools in most levels by the time you can accept that quest.

That being said, not all of the optional content is uninspiring. There’s healthy post-game content including a few bosses only encountered there, as well as a “new game plus” option. Some of the additional quests and areas eventually offer unique (or at least more difficult) challenges, even if they are doled out too slowly.

Dragon Quest Heroes: The World Tree’s Woe and the Blight Below does enough things different from the Dynasty Warriors series to warrant a look for those that may have written the genre off. However, it can still feel a bit too repetitive and we found most of our enjoyment came from a quick mission or two rather than slogging through many at a time.