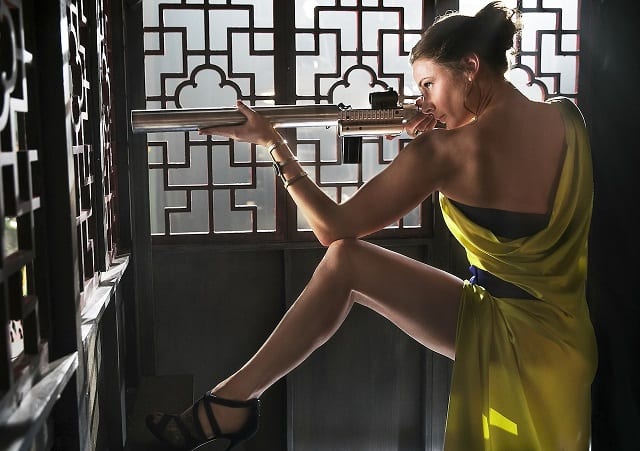 When the Tom Cruise-led Mission: Impossible franchise launched back in 1996, we weren’t big fans. The sequel, helmed by legendary action director John Woo, missed the mark as well. Enter J.J. Abrams, who was tasked with breathing life into the series — a charge that has been repeated twice since with Star Trek and, of course, Star Wars. It worked, and both MI III and Ghost Protocol were entertaining, action-packed titles that took things in a new direction.

Mission: Impossible — Rogue Nation is a continuation of that shift, putting Cruise and company in one precarious spot after another as they trot around the globe to combat the forces of evil.

Ethan Hunt (Cruise) and his team are on the trail of the mysterious Syndicate, a shadowy group that is manipulating world events behind the scenes. So much so, that others question its very existence. One such doubter is CIA Director Alan Hunley (Alec Baldwin), who believes the IMF team is an outdated relic and successfully lobbies to have the group shut down and rolled into the CIA.

Hunt remains in the field, however, after being captured by the Syndicate, and when he escapes with the help of Ilsa Faust (Rebecca Ferguson) he finds himself trying to continue the investigation while also avoiding the CIA. Both Brandt (Jeremy Renner) and Benji (Simon Pegg) have taken up positions within the CIA, while Luther (Ving Rhames) continues to work independently.

Eventually, Hunt realizes he can’t bring down the Syndicate without assistance, enlisting Benji to help him identify his unnamed captor at an opera house. Things go sideways when Faust shows up amid a planned assassination, leaving Hunt and Benji to wonder whose side she’s on. Their mission, should they decide to accept it, is to track down the man behind the Syndicate and bring him to justice by any means necessary.

Mixing action and humour have been a great strength of the last two films, and Rogue Nation manages to blend both elements successfully as well. There are some tremendous action sequences, made all the better by a reliance on actual stunt work rather than CGI, while both Cruise and Pegg provide just the right amount of laughs. In terms of the action, the motorcycle chase stands out along with the hand-to-hand combat during Cruise’s escape.

Initially we were skeptical about having Baldwin in a mostly serious role, given that after his work on 30 Rock it’s hard to see him as anything other than Jack Donaghy, but he does very well in this spot. Fellow newcomer Ferguson is also strong in replacing Paula Patton, the only notable character from the previous film not to return. She proves an able foil/ally for Cruise while also bringing the undeniable sex appeal audiences expect from an MI woman.

Cool gadgets and interesting locations are additional staples of the series, and they’re on full display once again. Even without the direct involvement/funding of the IMF, Hunt and company are able to access all manner of tech toys (all of which conveniently tell you exactly what they’re doing).

Established as a highly trained badass on par with Hunt in Ghost Protocol, Brandt is criminally underused in Rogue Nation. He spends much of the movie working in the CIA offices sort of helping Ethan, and even after he enters the field he becomes part of what’s almost a comedy duet with Luther. There isn’t a single meaningful action sequence for Brandt, and given the character arc and back story he had in the last film it makes little sense.

Sean Harris, barely recognizable from his turn as Fifield in Prometheus, plays Solomon Lane, the man behind the Syndicate. Throughout the movie we hear about his brilliance and string-pulling acumen to manipulate world events, but when he’s actually on screen he’s just… dull. We get he was probably aiming to play it calm and menacing. It just didn’t click with us.

With exciting action, deft pacing and just the right amount of levity, Mission: Impossible — Rogue Nation is another strong installment in what has become one of our favourite ongoing series.

By HC Green
Tags: Blu-ray reviews, J.J. Abrams, Jeremy Renner, Mission Impossible, Rogue Nation, Tom Cruise
This entry was posted on Thursday, December 10th, 2015 at 8:02 pm and is filed under Herija Green, Movie Reviews. You can follow any responses to this entry through the RSS 2.0 feed. Both comments and pings are currently closed.