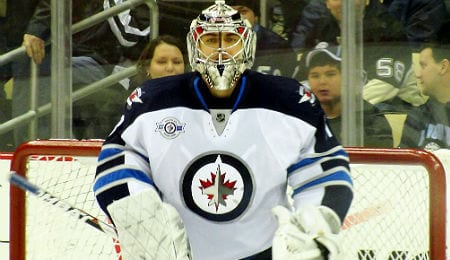 Ondrej Pavelec’s injury is another blow for the reeling Jets. (en.wikipedia.org)

Welcome to the debut of our new weekly Fantasy hockey column Hockey Hospital. Every Wednesday, we’ll be going over the latest injuries and analyzing their Fantasy implications. So with that, let’s get onto the injuries…

Ondrej Pavelec, G, Winnipeg Jets: After getting bowled over by Shane Doan on Saturday (see video below), Pavelec has a significant knee sprain and will be out of action at least until January.

Pavelec’s injury provides a great opportunity for either Michael Hutchinson or Connor Hellebuyck to get in a lot of starts and potentially take over the starting job. While the Jets haven’t been playing well lately (they are 2-6 in their last eight games with only 15 goals over that span), they made the playoffs last season and have shown that they can be a very good team. If Hutchinson and Hellebuyck provide average goaltending for the Jets while Pavelec’s out, they should pick up some wins and become Fantasy relevant goalies.

Brendan Gallagher, RW, Montreal Canadiens: After breaking two of his fingers while blocking a shot on Monday, Gallagher will not be able to play for at least six weeks.

This is a major loss for the Habs, as he had started the season with 19 points (including four PPG) in 21 games, and it doesn’t bode well for the Canadiens considering that Gallagher was one of their top scorers and feistiest players. At least now there’s an open spot on a line with Max Pacioretty and Tomas Plekanec. We’re not too sure who might get moved onto that line but so far it looks like Devante Smith-Pelly will get the first shot.

If that doesn’t work out and the Canadiens want to keep the David Desharnais–Tomas Fleischmann–Dale Weise line together, one of Lars Eller, Alexander Semin, or Alex Galchenyuk will probably get a chance on the top line.

What a surprise… Kane is injured again! While this probably doesn’t have too great of an effect on anything since he’s only day-to-day, the situation is worth monitoring. If Kane’s injured for longer than expected, a top-six roster spot will open up in Buffalo. So far, the move to Buffalo after that blockbuster deal has not revitalized his career, and this doesn’t help matters.

Cody Goloubef, D, Columbus Blue Jackets: Goloubef is expected to miss about six weeks after breaking his jaw during a game against Nashville on Friday. With Fedor Tyutin (broken nose), the Blue Jacket blueline is getting thin.

With him returning shortly, Calgary will have three goalies on one-way contracts again. Since Karri Ramo has been playing well and getting wins, it’s not a shock that Joni Ortio has been put on waivers as the team plans to return to the Ramo-Hiller combo. Meanwhile, if Hiller was dropped in your league and you need goaltending help, give him a look.

Andrew Hammond, G, Ottawa Senators: Hammond is still recovering from a concussion but has hit a rough patch and hasn’t been getting better.

While he’s been out, Craig Anderson should keep getting most of the starts for the Senators and providing a lot of Fantasy value to his owners. Anderson had recorded two straight shutouts before running into offensive powerhouse Dallas on Tuesday. He had posted save percentages of .950 or better in five of his previous seven games.

Brandon Sutter, C, Vancouver Canucks: Sutter will be out for the next two weeks because of an abdominal strain. With four goals through 16 games, he’s not quite at last season’s pace. Bo Horvat has moved up to centre the second line in Vancouver, so give him a look in deeper formats.

Semyon Varlamov, G, Colorado Avalanche: Varlamov returned from his injury on Monday against the Jets and was able to get the win.

Varlamov’s return significantly hurt’s Reto Berra’s Fantasy value. We don’t think Berra will get many starts with Varlamov back because Coach Patrick Roy has made it clear that Varlamov is his number one goalie (not to mention he has a much larger contract than Berra). Considering Berra’s given up 12 goals and you can start to see that it might be a while before he gets consistent starts again. In the meantime, if you want Varlamov on your team (there may be a slim chance he wasn’t grabbed back up), you better jump quick.

Zach Parise, LW, Minnesota Wild: The Wild is “slowly” evaluating Parise and are not rushing him back from his MCL injury. He’s started skating again, and while it is unlikely that he’ll play this week, he may be able to return next week.

Logan Couture, C, San Jose Sharks: Couture (fractured right fibula) is still “a ways away” from returning but he has started to skate, so he’s been getting scooped up in any leagues in which he was dropped. You may as well take a peek at your waiver wire, but it’s unlikely he’s available.

Now it’s your turn. In the comments below, let us know of any Fantasy hockey related injury news or notes our readers should be aware of.

By Scott Maran
Tags: HOCKEY, Ondrej Pavelec
This entry was posted on Wednesday, November 25th, 2015 at 4:21 pm and is filed under HOCKEY, Hockey Hospital, Scott Maran. You can follow any responses to this entry through the RSS 2.0 feed. Both comments and pings are currently closed.