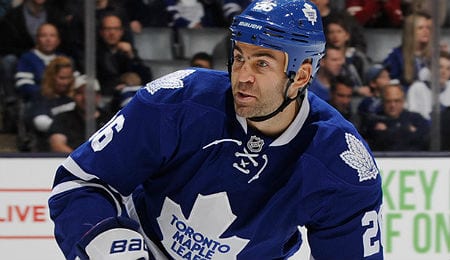 Daniel Winnik has come back to Toronto. (Mapleleafs.nhl.com)

Today, we wrap up our look at NHL free agency with the final part of the forwards. For more, see Parts One and Two. So while you Pascal Dupuis owners breathe a sigh of relief that the Penguin forward is not dealing with blood clot issues, let’s recap the final two forward free agency signings from this summer.

The Contact: Two years, $4.5 million with the Toronto Maple Leafs.

Analysis: This was a nice short-term, depth signing for the Leafs and Winnik gets a little raise from his previous contract.

Fantasy Impact: On a Leafs team that is probably going to be near the bottom of the standings, Winnik can’t be expected to produce that much (although he did pot a sweet goal in mid-October as you can see in the video below). After dealing him to Pittsburgh last season, Toronto most likely brought him back this season to play on its third line and help mentor the young kids in the lineup.

Update: Through 13 games, Winnik has one goal and four assists, is +1 with two penalty minutes and 23 shots. He’s slightly under our projections, but the +1 is nice, and given his shot total, the production should follow soon.

The Contract: Three years, $5.4 million with the Edmonton Oilers.

Analysis: We thought this was a good depth signing for the Oilers, especially since not having enough centres was a problem last season. Edmonton gets a good third/fourth line pivot and Letestu gets a long-term contract.

Fantasy Impact: On an Oilers team that now has plenty of centre depth, Letestu will definitely be limited to a bottom six role. However, despite the fact that Leon Draisaitl started the season with the Oilers, Letestu is currently acting as the third line centre (because of Conor McDavid’s injury). In this role, we can see Letestu getting some decent production, not dissimilar to what Derek Roy did last season.

Update: Through 14 games, Letestu has one goal and two assists, and is minus-4 with no penalty minutes and 13 shots, putting him well below our expectations. It’s going to be hard for him to do much on such a weak line (his current wingers are Matt Hendricks and Teddy Purcell).

Now it’s your turn. Let us know in the comments below what you’re expecting out of these two forwards.

By Scott Maran
Tags: Daniel Winnik, NHL
This entry was posted on Saturday, November 7th, 2015 at 5:45 pm and is filed under Free agents, HOCKEY, Scott Maran, Transactional analysis. You can follow any responses to this entry through the RSS 2.0 feed. Both comments and pings are currently closed.