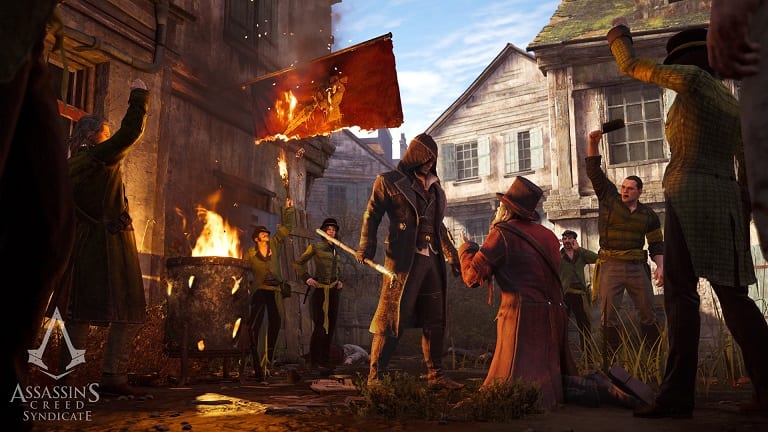 You know where the stick is going, right?

Assassin’s Creed is back, this time invading Victorian London with twin assassins Evie and Jacob Frye. Syndicate, the second iteration for this generation, is a gorgeous and thankfully bug-free affair, making for an immersive and fun experience that is ultimately Assassin’s Creed through and through — not much more and not much less, though what’s here is certainly polished.

Syndicate takes the control scheme from Unity and adds a few tweaks, while keeping the successful Free Run Up/Down buttons. Most notably, the cover button has been removed. Instead, being in Sneak mode will automatically stick you to cover. This works better than Unity’s broken mechanic, but it’s still very hit or miss, and it can wind up getting you caught on corners, small objects or NPCs.

Tangential to this, the standard clunky Assassin’s Creed parkour is still here. Yes, despite spanning two generations, eight years and nine console titles, the Frye twins still essentially move like Altaire. Ubisoft has added a grappling gun, which is fired off by L1, but foot movement is as cumbersome as ever.

Combat is slightly tweaked in Syndicate. There’s still the attack/counter face buttons at play here, but Ubisoft has also added a stun button to the mix. This is primarily used to break enemy blocks, and while you’ll use it regularly, don’t expect it to factor into deeper melee combat. Ubisoft has touted a new fist-based combat system, but it’s really still “mash the attack button and look for counters” with more stylized animation.

Assassin’s Creed games typically have high production values despite the vast processing power munched up by the open world. Syndicate is no different, and the bar that was raised by Unity (skin-removing bugs aside) has been exceeded by Syndicate.

Details of Victorian London are more alive than ever, and while the exquisite construction of the world has always been a series hallmark, the in-game character models have evolved to a point where they look equivalent to previous-generation cinematics.

It’s still not quite as detailed as the world seen in Metal Gear Solid V: The Phantom Pain, but keep in mind that the Assassin’s Creed open world is filled with a lot more moving parts.

Voice acting is similarly top-notch, with Jacob and Evie providing strong performances. Some of the game’s juicer characters are a little over the top (notably Alexander Graham Bell), but most of the supporting cast (i.e., Henry Green) does an admirable job.

Like most of the previous games, there can be some repetition in ambient sound, particularly when enemies are grousing at you, but none of those are as annoying as AC3’s “stumbling child” whooping.

Here’s the biggest news you’ll get for Syndicate: it works. Last year’s Unity was a strong game buried behind an avalanche of game-breaking bugs, making its launch one of the most bungled in recent history.

Beyond that, there are two major gameplay shifts for Syndicate. First, you can choose from either Evie or Jacob for all non-story missions (story missions are split fairly evenly between the two). They play pretty similarly, however, despite the claim that Evie is more stealth oriented and Jacob is more brawn.

Second, Ubisoft has done its best to try to eliminate long stretches of running from point A to point B. This is accomplished through the use of a grappling gun (similar to the Batclaw in the Arkham games), hijacking horse-drawn carriages (shades of Red Dead Redemption) and a home base on a moving train.

It’s a welcome addition to a long-standing criticism of the game, and in some cases, the grappling gun gives you some unique assassination strategies while carriage driving is cumbersome and frustrating.

Similarly, a minor (but welcome) addition is the use of visible icons for both entry points and actions, such as options to Free Run Down. Given the complexity of the Assassin’s Creed control scheme, this helps in the moment, and it can be particularly helpful when trying to assess infiltration schemes.

Aside from that, Syndicate is a pure Assassin’s Creed game, for better or worse. That means a fairly streamlined story campaign with a ton of side quests to handle. Gone are the naval battles and homestead building of previous games, and in their place is the ability to build up a street gang to take back London section by section.

Gangs can be built up through the progression system, upgrading with features ranging from cheaper supplies to recruiting different types of thugs to fight alongside you (similar to bribing mercenaries in previous games). This is in addition to collection glowing helix icons, fighting in fight clubs, finding rare beer, killing or kidnapping random bounties, breaking up fights in public, running odd-jobs for various supporting characters and all of the other usual series filler.

Also, as mentioned earlier, Syndicate has no multiplayer feature, which was probably a development decision by Ubisoft to release a largely bug-free game.

As for the main story, it’s a straightforward and enjoyable one, mainly because Jacob and Evie are likable characters. Major assassinations take place across significant London landmarks, and Ubisoft has allowed for more flexibility with planning these out.

It’s not true freedom, as you’re still often funneled along a handful of paths and the clunky stealth/parkour gives you away more often than you’d like, but it’s taken the smart design choices that began in Unity and expanded on them.

Assassin’s Creed: Syndicate is a very good AC game featuring incremental steps forward and a lot of polish. However, it’s still very much an Assassin’s Creed game, and until Ubisoft decides to revamp the clunky core mechanics or take a large evolutionary step forward instead of just adding more side quests, the series will be always feel like it’s a tad shy of greatness. But hey, at least the goofy “alien gods that want to destroy the planet” storyline has been mostly ditched.

By Mike Chen
Tags: Assassin's Creed, Assassin's Creed Syndicate, Evie Frye, London, Syndicate
This entry was posted on Saturday, November 7th, 2015 at 4:07 pm and is filed under Mike Chen, Video Game Reviews. You can follow any responses to this entry through the RSS 2.0 feed. Both comments and pings are currently closed.