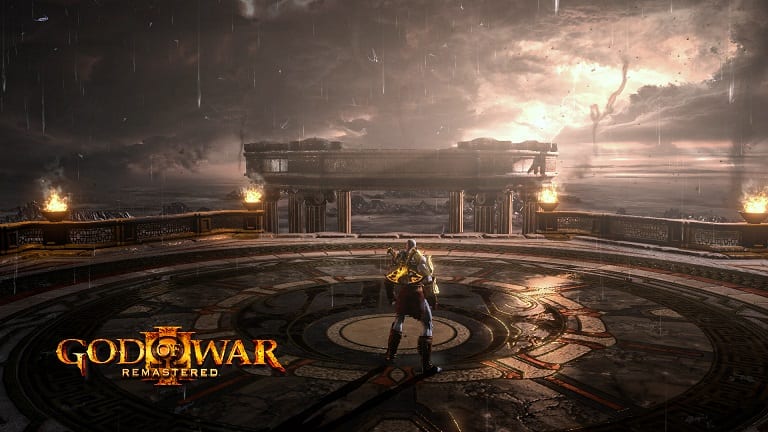 ​And Kratos wept for there were no more worlds to conquer.​

As part of Sony’s apparent ongoing effort to upgrade all its first-party PS3 releases to the PS4, God of War III, originally released in 2005, has found its way to next gen with God of War III Remastered. Is it worth picking up the conclusion to Kratos’ trilogy on a new console? Let’s bring the fight to the gods and find out.

One of Santa Monica Studio’s most endearing accomplishments with the series is how tight and varied the combat is. There’s a fair amount to keep track of, but once you’ve grown comfortable with the setup it’s easy to unleash combos by mixing light/heavy attacks, transition to magic strikes, evade incoming blows with a flick of the right stick and even parry enemies by blocking at the right time.

Adding to the variety is Kratos’ selection of weapons and supplemental items. Each of the four primary weapons has its own array of combos along with a unique corresponding magic attack — some have specific properties that make them effective against certain enemies. You’ll also have access to a bow that can set foes alight, an item that can temporarily blind your adversaries and reveal hidden items and so on. It hits the sweet spot for providing options without being overwhelming.

Unfortunately, the game’s double jump is one of the most inconsistent commands we’ve encountered in a long time. Roughly 75 per cent of our deaths were the direct result of the second jump not triggering and tumbling to our demise as a result. It’s infuriatingly random, and only the generosity of checkpoints keeps it from being a much larger issue.

There is a number of things the God of War series can hang its helm on, but the quality of its visuals (both in terms of execution and level design) might sit atop the list. As such, the jump from the PS3 to the PS4 isn’t all that striking even with full 1080p support and an improved frame rate. Still, it’s a testament to the source material that it holds up as well as it does a decade later.

Of course, the game was able to achieve this level of graphical excellence by employing a fixed camera that dictated what you see and how you see it. This may be more of a hindrance than you remember as there are times enemies will engage right by a switching point, allowing them to land some cheap blows off screen. It’s a relatively small complaint, but it ages the game more than any other factor.

Voice acting is solid as usual, though your mileage may vary based on whether or not you tire of Kratos’ constantly menacing tone. The soundtrack is suitably grandiose as you explore the underworld, cities and massive structures erected to honour the gods.

Ignoring the obvious barrier to entry, the story being told in God of War III is a natural extension of all that Kratos has endured at the hands of the gods throughout previous games. He’s fully invested in getting his revenge on Zeus at this point, no matter how much collateral damage he leaves in his wake along the way. It’s a satisfying way to end the trilogy.

Gameplay in God of War III Remastered is split between combat and puzzle solving with some segments of platforming mixed in as well. Of the three elements, combat is both the most frequent and the most polished. Puzzles tend to strike a good balance of requiring some amount of problem solving without being so mind bending that they grind the momentum to a halt. Platforming is a little sloppy.

Where the game (and the series) excels is in its massive scope. These are gods you’re dealing with, and they won’t be falling meekly with many of the game’s signature battles lasting around 10 minutes as you attempt to cut the larger-than-life deities down to size. There’s also a healthy variety of enemies that the game effectively reshuffles as you advance.

Checking in at better than 10 hours, at least on your first run, God of War III is well paced and exciting, and outside of a few moments (ascending the chain) it stands the test of time. Viewed purely on that level it’s absolutely worth purchasing.

However, there are other things in play, most notably the cost. Granted, it’s priced below a brand new retail game, but you’ll still pay four-plus times as much for Remastered on the PS4 versus what’d it take to wrangle the PS3 version. Are the upgrades significant enough to warrant the difference? No. If you still have the older console that’s the more sensible way to go.

It’s difficult to assign a score to God of War III Remastered. Judged purely on its own merits, it’s one of our favourite adventures from the PS3 era. Viewed in the context of not being dramatically better than the original and not having its two predecessors available on the PS4, however, it’s not immediately clear who this was made for.

By HC Green
Tags: God of War III Remastered, Kratos
This entry was posted on Monday, September 28th, 2015 at 6:24 pm and is filed under Herija Green, Video Game Reviews. You can follow any responses to this entry through the RSS 2.0 feed. Both comments and pings are currently closed.