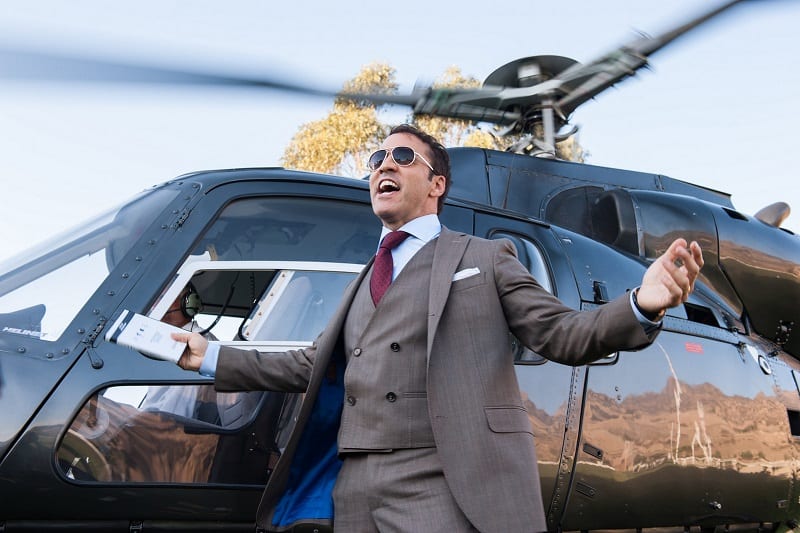 Let’s hug it out, bitch!

As a general rule of thumb, we’ve preferred HBO’s work on the dramatic side (The Wire, Game of Thrones, The Sopranos, etc.) to its efforts at comedy. Entourage, however, which ran for eight seasons before shutting down in 2011, was always interesting in the same way Ballers is now — it delves into a world that seems like it would be really fun to be part of. That angle is played to the hilt in Entourage: The Movie, creating a festive but shallow experience.

Separated after a whopping nine days of marriage, Vincent Chase (Adrian Grenier) decides it’s time to take his career in a new direction. He finds a somewhat reluctant partner in long-time agent Ari Gold (Jeremy Piven), who, in his new role as studio head, offers Chase a starring role and directorial duties in Hyde. Eight months later, the film has yet to be viewed, is already over budget and now Vince and “E” (Kevin Connolly) want Ari to free up more money to complete it.

This sends Ari off to Texas to meet with the financier of the film, Larsen McCredle (Billy Bob Thornton) and his son, Travis (Haley Joel Osment). Larsen is unwilling to green light additional funds without the approval of his son, and he sends Travis back with Ari to screen the film. While Ari thinks the film is incredible, Travis takes issue with the acting of Vince’s brother, “Drama” (Kevin Dillon), and wants him cut entirely from the project before freeing up additional funds.

From there it’s up to Ari, Vince and E to try to change Travis’ mind amid a sea of subplots involving plenty of returning characters and a laundry list of cameos.

There’s a genuine sense of fun with the movie as it tosses in dozens of cameos, putting actors you’re very familiar with in unique situations. Liam Neeson’s stoplight banter with Ari is good stuff, and the Ronda Rousey storyline with Turtle (Jerry Ferrara), while definitely more in-depth than a cameo is surprisingly enjoyable. Also, Gary Busey is legitimately insane.

Hollywood as a character plays into the fun factor as well with the guys driving around in awesome cars, partying with gorgeous women and playing up the glamour of the whole thing. The opening yacht scene sets the tone, and it never pulls back.

In many ways, Entourage’s dirty little secret (that everyone kind of knew) is that Grenier isn’t a very good actor, and his inability to take the Vincent Chase character anywhere interesting during the show’s run continues here. It’s completely unbelievable the guy we watched chase skirts and act like an entitled teenager in equal measure for the last decade could direct an Oscar-worthy film.

We didn’t particularly care for E’s story arc, either. He’s in some weird place with his pregnant “not girlfriend” Sloan (played by stunning Canadian actress Emmanuelle Chriqui) where they’re separated but still attending birthing classes together, but E is sleeping with all different women… but still loves Sloan… but Sloan can’t move past something… but then she can… but then E… and so on. It’s just a mess.

As mentioned in the opening, Entourage: The Movie feels really shallow. The type of film in which you get to the end, and you’ve had a pretty good time, but then you think back on it and can’t really pinpoint what went on. It just feels like a really long episode of the show in which everybody gets their moment to ride off into the sunset with a happy ending.

There are a number of Blu-ray bonus features, including a mini “mockumentary” about the making of Hyde with actors in character. The deleted scenes are more like extended cuts of scenes that were already in the film, and they don’t add much. Probably the best stuff is the sit-down interview with the five main characters plus the writer (is it us, do does Grenier seems painfully awkward in it?) and the short featurette on Hollywood.

Although not a great film, Entourage: The Movie is an enjoyable popcorn flick that fans of the series should enjoy. Hell, even Drama finally catches a break. Victory!!!

By HC Green
Tags: Blu-ray reviews, Entourage: The Movie, Game of Thrones, HBO, The Sopranos
This entry was posted on Sunday, September 27th, 2015 at 1:58 am and is filed under Herija Green, Movie Reviews. You can follow any responses to this entry through the RSS 2.0 feed. Both comments and pings are currently closed.