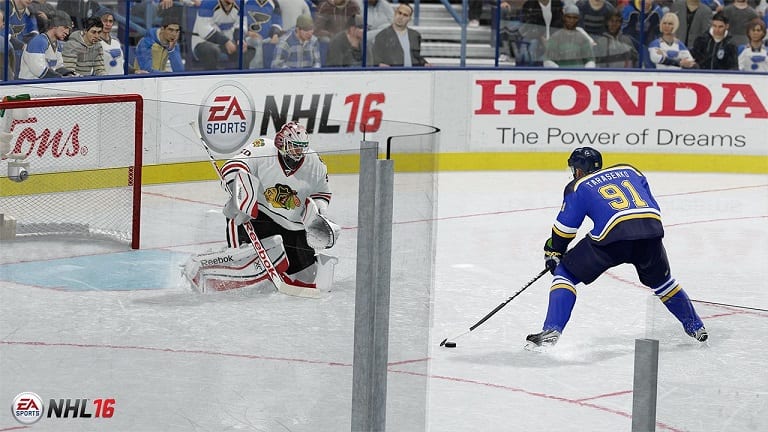 Fans of the award-winning NHL series were plenty mad upon the arrival of NHL ’15. Sure, it looked great, but about two-thirds of the game modes were cut as EA Sports sprinted to meet next-gen launch dates. This year’s NHL ’16 arrives with some graphical bells and whistles, but more importantly, all of those online modes are back. Now the question is whether returning the stolen goods is enough to make this a great game?

If you’ve played a modern version of the NHL series, then you’ll know the controls. Offense, defense and movement are essentially the same as before. The addition of Precision Skating (more on that below) puts a greater emphasis on momentum with starts and stops (skater and goalie), so analog movements are fine-tuned and more sensitive, though you won’t really notice this if you’re starting with a low-skating character.

This is a welcome addition, though not a game changer. It’s important to note that alternate (read: simplified) goalie controls are also available.

Most of the graphical updates come in the form of a more authentic arena experience. Previous iterations were somewhat generic in that area despite 3D fan models and detailed architecture. Arenas now feel much more personal and real thanks to team-specific celebrations, mascots and details. This also includes a few new camera cutaways and angles for a more TV-like presentation.

In addition, facial models are more detailed than last year, particularly when it comes to the all-important area of facial hair (yes, there are playoff beards now — imagine the lucky programmer that got to research that). Other specifics, such as player-preferred equipment and coloured laces, aren’t necessarily important, but that extra bit of variety gives more of a real-world feel to the presentation. You probably won’t notice it unless you’re looking for it, but it’s one of those nice touches that pushes the visual envelope.

Many considered last year’s PS4/Xbox One release of NHL ’15 to be a bit of an empty shell. While PS3/Xbox 360 players were treated to the usual complement of features, the next-gen platforms were given essentially a single-player tech demo.

EA Sports was very aware of the criticism and knew that much of the NHL ’15 development cycle was focused on the core gameplay. NHL ’16 is a clear response to the largely disappointed fan base.

First, let’s look at the on-ice gameplay. Two improvements are merely tweaks and nothing more than that. Precision Skating allows for quicker, sharper movements for specific moments such as walking the blueline as a defenceman or working behind the net in Wayne Gretzky’s office — essentially strafing, or for those that skate, lateral crossovers.

From a visual standpoint, this feature looks great, as the added animations bring a new reality to it. More importantly, it feels right, and while it won’t be a game changer (novices may not even notice it), it adds nuance to movement in a subtle way.

The second gameplay addition doesn’t feel as tangible. Seamless Puck Pickups basically means that you can transition quickly from grabbing the puck to a pass or shot. Technically, we’re guessing that animations are triggered later in the cycle when it detects a puck pickup, so it can execute faster. This detail is so specific, though, that we wonder how many people will actually notice it.

Goalie controls haven’t necessarily been revamped, but the feel has been updated to integrate the Precision Skating programming. This allows for more precise movements while integrating side-to-side momentum with a more weighty, realistic feel.

For single players, Season Mode is restored, Hockey Ultimate Team is enabled across a single season, and Be a Pro is back. Last year’s version of Be a Pro mysteriously left out the ability to sim to the next shift and post-shift coach feedback, but both features have now returned.

The progression system itself has been tweaked, as on-ice actions have greater influence on the way attributes are earned. This helps create a pro career that organically reflects your playing style as opposed to simply mirroring manually assigned attributes.

To help you get better at specific plays, such as winning a faceoff or finding an open man, the new Visual On-Ice Trainer helps break down options such as open passing lanes or shooting targets as transparencies over your player. Veteran players probably won’t get much out of this, but it will certainly help novices or casual players enhance their skills.

Be a GM is also back, and thankfully the dense menu system flows and processes quicker than before. The only new feature is the addition of player personality management, which basically means you’ll know when a certain player is a cool dude or a jerk. Yes, sports sims are now at a point in which you too can address petty conflicts between teammates by calling a meeting.

Most other additions/improvements focus on restoring what was missing from NHL ’15. That includes the EASHL online mode, 6-on-6 online teamplay and online couch co-op. There aren’t any surprises here, so while this is cause for much celebration, at the same time it feels kind of like a backhanded compliment since they were cut from the last game.

While the other tweaks are the true additions, these restored modes are what most series fans will be focusing on. It’s hard to truly reward a title for essentially returning what was taken away, though at least it’s comprehensive. (As of launch, there were sync/lag issues.)

EA Sports already had a solid gameplay engine for NHL ’15, and with NHL ’16, it has restored the features last year’s edition sorely missed. The rest of the additions don’t make a great impact, and while the overall package is certainly everything you previously wanted, one has to wonder how much further the envelope can be pushed.

By Mike Chen
Tags: EA Sports, NHL 16, Video Game Review
This entry was posted on Sunday, September 20th, 2015 at 6:34 pm and is filed under HOCKEY, Mike Chen, Video Game Reviews. You can follow any responses to this entry through the RSS 2.0 feed. Both comments and pings are currently closed.