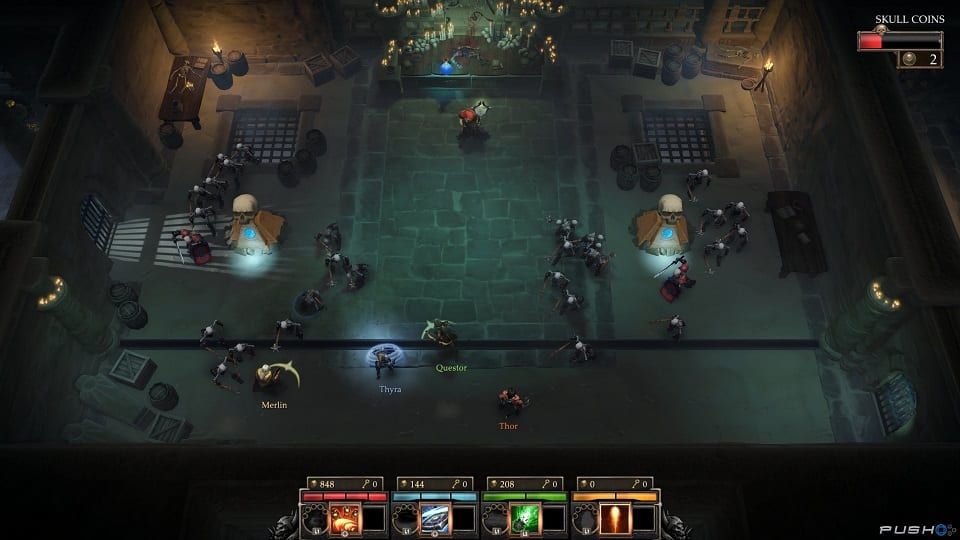 Crush your enemies. Hear the lamentations of their women.

We’ve personally lost hundreds of quarters to this originator, and also spent countless hours on the console versions when they dropped. Last year, Gauntlet: Slayer Edition was released on Steam, and just recently it was brought to PlayStation 4. In the four-player co-op classic, you choose between four (or five, counting DLC) dungeon delvers, each with their own set of skills. The objective is simple: destroy the various threats and steal gold from your freshly-dead partners.

Since there are four different key characters, your controller does something different with each of them. While playing as the valkyrie, you might notice the right stick will raise your shield in whichever direction you’ve nudged it. When playing as the warrior, however, the same motion aims a charging run move. Not familiarizing yourself with each characters workings could get you into a lot of trouble early on.

Pressing R1 activates your chosen relic, be it a pair of shoes that increases your attack speed or a ring that sends out a circle of frost. L1 will cause your character to use their potion, which is also character specific, as the warrior throws his like a grenade while the Elvin archer tosses his in the air for a brief moment before sending an arrow through it and whatever else was behind it.

Melee characters (warrior, valkyrie and the DLC-only necromancer) attack with the square button, while the ranged ones (elf and wizard) aim their shots with the right stick — though the Wizard has to summon spells beforehand (think Magicka) and switch between them constantly to truly be effective.

Stages are all wonderfully detailed and amazingly lit, but character detail takes a hit. See, there are several pieces of alternate gear, but the camera is zoomed out so far (likely to accommodate the four-player co-op) that you’ll rarely get to admire your badass (and extremely expensive) gear anywhere except the character select screen.

Spell effects and attack animations are fantastic, though, and resulting blows send enemies careening into walls and sliding across floors, which is just awesome to see when there are about 50 zombies trying to squeeze through a doorway.

Sound design is top notch and features quality, comical voiceovers for your characters and the narrator. Accidentally destroy a food pickup and the narrator will say something along the lines of, “And in a remarkable display of tactics, the warrior has destroyed the food.” Characters also bicker amongst themselves and are very vocal throughout.

First off, there’s the campaign, which can be hopped in or out of by any player at any time, so it’s truly rare that you’ll face a challenge alone. The Coliseum challenge pits players into a devilishly tricky room, forcing them to contend with six waves of baddies before they are awarded with a clothing unlock.

The real deal, though, is Endless mode, in which you just keep smashing and shooting until you either die or get sick of it. Each progressive room is randomly generated, and you’re able to buy power-ups on each floor. Much gold can be acquired from this mode, but the items needed to replenish your health can cost a pretty penny indeed — or more like about 80,000 of them.

So really, whatever mode you decide on, you’re going to have fun. Once you dig in, find your character and start figuring out items and upgrades for them, Gauntlet: Slayer Edition gets really damn fun. As mentioned above, one big part of the game is grabbing as much loot as you can, even if it means stealing from a dead friend before they respawn, which can only be done if enough enemies have been recently slain to gain a Skull Token. Just be careful how much you steal from a friend, unless “friend” isn’t really a word you’d use to describe whom you’re playing with.

Gauntlet: Slayer Edition stands the test of time as one of the best co-op experiences out there. So get some pals together and get into those dungeons, that loot isn’t going to pick itself up!

By Jeff Cater
Tags: Gauntlet: Slayer Edition, Magicka, PlayStation 4, Steam, Video Game Review
This entry was posted on Tuesday, September 1st, 2015 at 1:21 am and is filed under Jeff Cater, Video Game Reviews. You can follow any responses to this entry through the RSS 2.0 feed. Both comments and pings are currently closed.