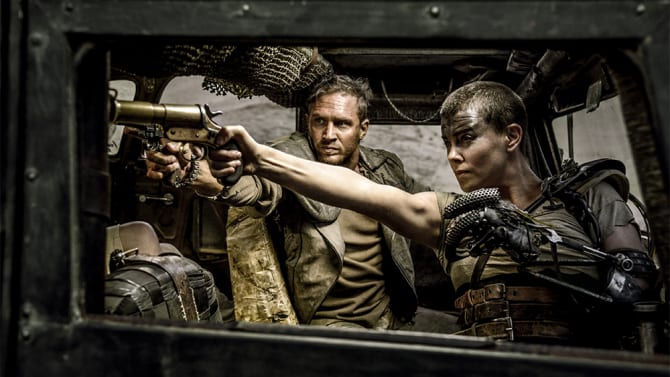 Give me a pack of Tropical Fruit Bubblicious… and some skittles.

It’s been nearly three decades since Beyond Thunderdome ended the Mad Max trilogy. That’s a long time for any film series to endure, even more so when the final film was the most divisive and the star of said films has had his career derailed by controversy. Director George Miller would not be dissuaded, however, recasting Tom Hardy (The Dark Knight Rises, Inception) as Max Rockatansky and bringing in Charlize Theron (Prometheus) to star opposite Hardy in Mad Max: Fury Road.

Captured and reduced to a living blood bag, Max (Hardy) soon finds himself back on the road when the evil leader of his captors, Immortan Joe (Hugh Keays-Byrne), calls all his forces — collectively known as “war boys” — into action to track down Imperator Furiosa (Theron). Furiosa, at the helm of a mighty war rig, has smuggled out Joe’s five “breeders” (AKA, “The Wives”), beautiful young women who don’t bear the scars of the post-apocalyptic world but were held captive to produce a male heir to Joe.

Tethered to a vehicle driven by Nux (Nicholas Hoult), Max turns the tables and ends up joining Furiosa to form an uneasy alliance. From there, the two of them, along with the Wives and a now-devastated Nux, make for an area referred to simply as the “Green Place” with Joe and his extensive band of war boys hot on their heels. It’s pretty much wall to wall vehicular action here as the intensity continues to get ratcheted up.

While this is an action movie through and through, it eschews the normal setup of action, followed by a lull of exposition and then more action. Even with very few moments to catch your breath, the actors do an excellent job of advancing the plot through non-verbal means. It’s all facial expressions and body language, to the point that Max barely utters a sentence for the first half of the film. Fury Road trusts its audience to pick up these cues, and it’s all the better for it.

Miller’s vision of a post-apocalyptic world is in stark contrast to most, and it strikes the right blend of realism and fantasy. At the heart of that realism is an incredible attention to detail; for instance, the vehicles are constructed of repurposed materials. These aren’t meaningless props, either. Everything, no matter how briefly it may appear on screen, is there to draw you further into the world — it’s something that’s really driven home in the suite of bonus features.

There’s not much to complain about here. The action can wear you down a bit, but the relentlessness of the chase is no doubt deliberate to make you feel their exhaustion. Some of the over-the-top elements were a little too over the top for us, such as the absurd Doof Warrior, who rides on what’s essentially a mobile orchestra and plays a guitar/flamethrower. Still, when that’s all we can come up with for negatives it’s a testament to how good the movie is.

This is one of the best collections of bonus features we’ve seen on a DVD or Blu-ray with several well produced and informative documentaries to digest — and we strongly encourage watching them, as they really enhance the film by going into detail about how they put everything together. The strongest are the “Maximum Fury,” “Fury on Four Wheels” and “Tools of the Wasteland” features, but the character-driven ones about Max, Furiosa and the Wives are good as well.

There are also a handful of deleted scenes, probably containing fewer than five minutes of additional footage, and they’re probably the weakest of the special features with Joe’s speech being the highlight of an inauspicious lot.

Thanks to its relentless pacing, fantastic stunt work and underrated storytelling, Mad Max: Fury Road has guaranteed itself a spot in Valhalla, where the best action movies play forever.

By HC Green
Tags: Blu-ray reviews, Charlize Theron, Mad Max, Mad Max Fury Road, Tom Hardy
This entry was posted on Tuesday, September 1st, 2015 at 3:51 pm and is filed under Herija Green, Movie Reviews. You can follow any responses to this entry through the RSS 2.0 feed. Both comments and pings are currently closed.