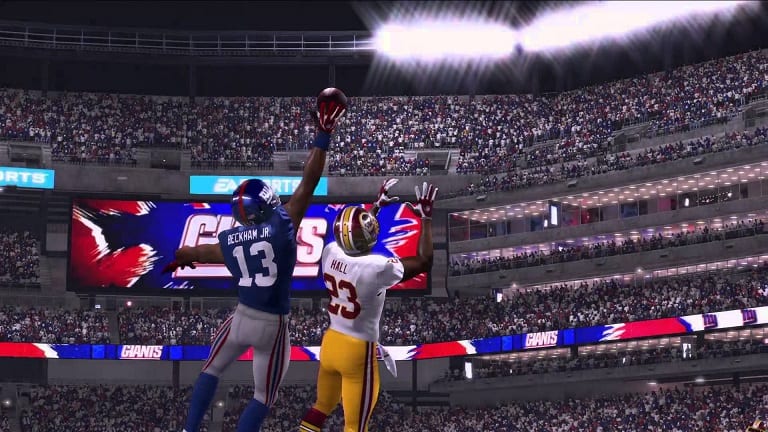 The catch that changed everything…

If you’ve watched even a moment of NFL analysis the past several years you’ve no doubt heard it called a “quarterback-driven league” or a “passing league,” or some variation. Well, apparently EA Sports was listening because Madden NFL ’16 has added significant depth to the passing game while also making individual quarterbacks feel unique from one another. It’s a positive step for the franchise, and one that football fans should embrace.

Let’s get right to it: the passing game has never been better in Madden. For years, quarterbacks have thrown bullet passes or lobs. This year EA has added three new types of options to choose from. There’s the touch pass (double tap) for dropping balls in between coverage, the high throw for exploiting a size mismatch and a low ball in which the receiver can shield off defenders — the latter is especially useful on short routes in traffic and curls.

In addition, you can now immediately switch to receiver control after the ball is released and instruct them to attempt one of three catches. There’s a possession reception, which creates a higher probability of completion at the expense of post-catch yardage, and a RAC (run after catch) in which you’ll try to snatch the ball out of the air in stride and turn up field, but this creates more drops. The last one is the aggressive catch, in which you basically put the ball up and let your man go get it.

Everything about this new setup is enjoyable, though it’s worth mentioning that at this point there are far too many completed bombs in which receivers will make obscene catches in traffic. The new defensive options — play the man and make a sure tackle, or play the ball and try to break it up — are supposed to help counter this, but right now it’s too heavily skewed in the offense’s favour.

Running the football feels as good as ever, and the blocking A.I. seems to have taken another step in the right direction as linemen are generally assignment sure in their pulling and trapping. Like the QBs, the running backs definitely feel different from one to the next with superior runners making better cuts and shedding more tackles (sometimes too many).

Lastly, and maybe it’s just us, but we had some trouble directing our punts accurately. We’d line things up to kick left, pull down the stick and then just shank it far to the right. There’s no outward sign that anything has been changed from last year, but our success rate was poor. Making it even stranger, the same issue was nowhere to be seen on kickoffs and field goals.

In many ways this section has become almost a copy-and-paste affair with praise and criticism pretty much ending up in the same places year after year. Even compared to last year, Madden is noticeably improved with smooth animations and tremendous lighting. Outside of the in-game stat overlays it’s not the type of improvement that’s going to jump off the page, but it’s there. If there’s a weakness here it remains the ragdoll physics when gang tackling. It just looks a little off.

Commentary is still the shakiest part of the series’ presentation. It does seem a little better than last year’s efforts, but there’s still no situational awareness. Big plays in big moments should be treated as such, and here everything feels the same whether you’re steamrolling someone in Week One or fighting for your playoff lives in the NFC Championship Game. On the field, the cracking of helmets, calling of audibles and more remain very good, while this year’s soundtrack is solid.

Beyond the every-down improvements to actual in-game action, Madden NFL ’16 also delivers a brand new mode, which is essentially hybrid Fantasy football. Dubbed Draft Champions, you’re provided with a baseline team of JAGs (scouting lingo for “Just A Guy,” not the Jaguars) and then allowed to select a coach and draft 15 additional players. Each round offers three players to select, and it’s up to you how you want to build your team.

Once your team is assembled you take part in a three- or four-game series based on whether you’re playing against the CPU or other people. It’s a decent addition, but it lacks depth. Team building, while quick, is largely luck of the draw, and since you never know who’ll be available from one round to the next, you pretty much have to guess when to address a position — take Alfred Morris now or hope someone better comes available in a subsequent round.

It’s also odd that finishing Draft Champions rewards you with packs for Madden Ultimate Team (MUT) rather than boosting your next squad. That makes the whole thing feel like a feeder system designed to steer you toward MUT.

Madden’s card game is back and improved with more challenges that feel like they’re worth completing. They’ve also added Ultimate Moments, in which you reenact key situations. It’s all positive movement for MUT, though if you’ve never bought the core concept nothing here is going to change your mind.

Franchise mode also received a significant new feature this year with dynamic drive goals. On paper, the thought of accomplishing specific criteria to “set the tone” — like scoring points on your opening drive or forcing a three-and-out — and build momentum sounds intriguing.

In practice, however, it needs tons of work because they’re far too arbitrary (and in some cases, counterintuitive). They should work in tandem with game situations and not simply ask you to pass for a touchdown rather than run or call specific types of plays.

In terms of providing the on-the-field product of NFL football, Madden NFL ’16 might be the best we’ve seen from the series, yet. There are nits to pick, and none of the mode additions/tweaks are great, but this is still an excellent representation of the sport.

By HC Green
Tags: Madden NFL '16, Video Game Review
This entry was posted on Friday, September 4th, 2015 at 8:17 pm and is filed under FOOTBALL, Herija Green, Video Game Reviews. You can follow any responses to this entry through the RSS 2.0 feed. Both comments and pings are currently closed.