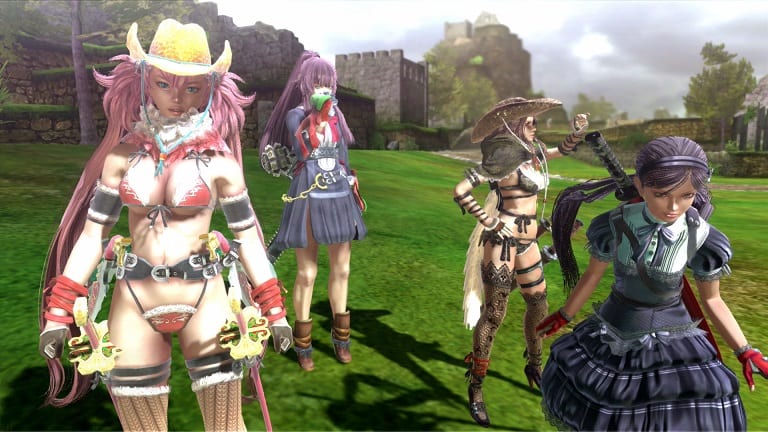 A staple series on the PlayStation for over a decade, OneChanbara makes an appearance on U.S. soil for the first time since 2009 with its next-gen debut OneChanbara Z2: Chaos. Its concept — scantily clad women battling the undead in visceral combat — is deliciously crude. Now let’s find out how well Chaos blends that with hack n’ slash gameplay.

Although there’s a respectable amount of depth here, make no mistake that this is pure hack n’ slash action from start to finish. There are four characters at your disposal (Aya, Kagura, Saaya and Saki), each possessing their own weapons and move sets. Attacks are broken down into basic and strong, which can be chained together for lengthy combinations. A sub-weapon can also be used, though it’s generally weaker and best suited for hitting enemies at range.

You’ll also have some evasive capabilities, including a jump that covers significant ground and a basic dodge. The two can be combined to dodge in mid-air. Each character has access to two weapons that they can toggle between at will. As you kill enemies with a particular weapon, blood will begin to accumulate on it, diminishing its effectiveness. A quick tap of “L1” will cause you to dramatically shed the blood from your weapon. Pretty cool.

Hitting multiple buttons at once will activate some high-level attacks, provided the necessary gauge has been filled, and you also have the ability to summon the rest of your group into battle. This is a good strategy when facing tougher enemies or when low on health. You’re also free to switch between which of the four you’re controlling at any time, so you’ll want to be familiar with how they handle.

It’s good, but not great. Many of the moves are huge sweeping blows, and that makes it easy to lose track of enemies as the camera struggles to keep up. In addition, the HUD packs a lot of elements into a fairly small space, which can lead to some confusion as to what gauges have been filled and what special moves you have available.

Suffice to say that OneChanbara Z2: Chaos won’t be winning any awards for graphical achievement, as the game’s visuals could easily be mistaken for a PlayStation 3 title. There’s a simplicity to the areas on which you’ll fight and a dullness to the rank-and-file enemies, though at least things get elevated a few notches for boss fights. The girls have been shown more care and should lead to some pleasant dreams courtesy of their skimpy outfits and gratuitous cut scenes.

Generic guitar riffs accompany most of the action. It’s fine for what it is, but in reality your brain will probably stop registering it fairly early on — we had to go back and replay some chapters during the writing of this review just to refresh our memory as the game’s soundtrack. Voice acting falls under the same banner of being thoroughly unremarkable.

Bad stuff is happening around the globe surrounding the undead, and it’s up to your four-member team of scarcely clothed heroines to put an end to it. While scattered cut scenes try to fill in the plot during the campaign, it’ll likely be of minimal interest outside of providing unnecessary motivation to wade through thousands of baddies and render them a quivering mess of severed body parts.

For all that, combat actually has some diversity. All four characters have their own unique weapons, move sets and special attacks. Gauges are constantly filling and depleting, allowing you to unleash vicious combos or even transform into an alternate form to deal some serious damage. Defeated enemies drop yellow orbs, which you can then use to buy new weapons and moves. It helps keep things from becoming stale.

OneChanbara has some issues beyond its outdated presentation as well, though, most notably that some boss fights are very frustrating. While we won’t complain about challenge, there are a few notable encounters in which the enemy’s speed makes it difficult to follow them, even when locked on. Even more annoying are those that feature combos that knock you down and then keep you down in a seemingly unbreakable death loop.

Outside of the bosses, there are fights in which things get so crowded all of that aforementioned diversity goes right out the window as you mash buttons madly to stay alive. The game also features some foes that can only be hurt by certain types of attacks, which can get confusing in the heat of battle.

We weren’t really sure what to expect with OneChanbara Z2: Chaos, but it turned out to be the gaming equivalent of a guilty pleasure with loads of action, plenty of gore and delightfully skimpy outfits.

By HC Green
Tags: OneChanbara Z2: Chaos, Video Game Review
This entry was posted on Friday, August 7th, 2015 at 4:35 pm and is filed under Herija Green, Video Game Reviews. You can follow any responses to this entry through the RSS 2.0 feed. Both comments and pings are currently closed.