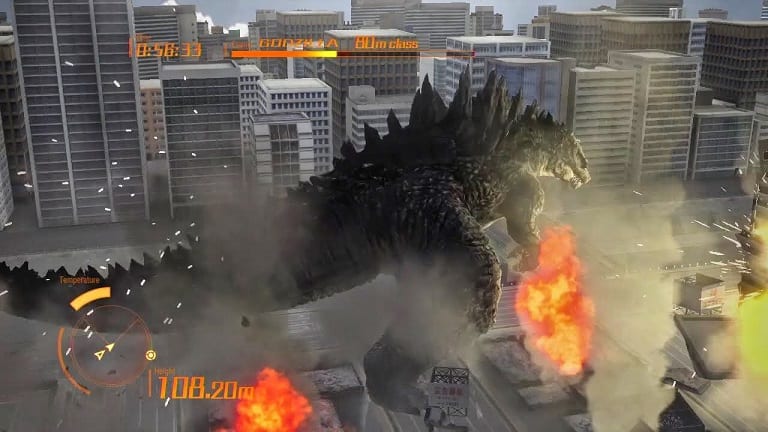 Have you ever wondered what it would be like to smash Japan into tinier bits of Japan? Does the idea of pushing buildings over with the press of a button excite you? Does a laser blast emanating from your tonsils sound like a good deal? Well, maybe we’ll find out what that’s like in a few years or so, because the only lessons that we’re taught in the recent Godzilla for the PlayStation 4 are as follows…

Rather than being able to freely move Godzilla (or any of the selectable monsters) with the left stick, it simply moves him forward and back, or makes him strafe left to right. That might sound all dandy and such, but the right stick only manipulates the position of the camera, leaving the turning controls bound to L1 for left rotation and R1 for right.

In the short amount of time it takes to complete the campaign, it’s super easy to forget about that and get all jumbled while trying to simply punch a building. We understand that Godzilla and his ilk are gigantic and aren’t the nimblest of creatures, but the sluggish response of “light” and “heavy” attacks further hampers the already shaky experience. Circle performs a projectile/beam attack with most monsters, but really, good luck hitting anything.

Lesson Two: Don’t give a crap about anything but the monsters.

Well, thankfully, Godzilla certainly sounds like he should, as do the other monsters. The explosions and crumpling buildings sound nice and meaty, with electricity crackling and iron beams groaning while bending. In fact, if you close your eyes, Godzilla is amazing.

When you open them, however, you’ll swear that someone has swapped out your console for a Sega Dreamcast. Buildings all look very similar, the ground is bland and completely flat, and the smoke effects are absolutely dreadful. Meanwhile, the monsters look great, which only serves to make the environment’s awfulness stand out even further.

Even in the opening cinematic we see Godzilla taking out sections of buildings, but when we get a chance to do it ourselves, entire towers crumble to the ground when we’ve only tapped one side of it. FORTHELOVEOFGODZILLA he doesn’t even leave footprints. He is literally the biggest thing, and he doesn’t leave footprints.

Godzilla has many offenses to fans of the big lizard and gamers in general. Firstly, the campaign has you destroy power generators. Almost exclusively. In order to beat any mission, it comes down to walking over to the power station and punching it until it turns red and explodes. Ya know, like an old NES boss.

In between you and the generator are a bunch of copy-and-paste, uninteresting buildings, a high amount of completely useless tanks and helicopters and sometimes another monster to contend with. That is “God of Destruction” mode, which is the vehicle for the main “storyline” in which humanity tries to convey to Godzilla that we can share the Earth. So, naturally, you smash the crap out of them.

If you position Godzilla right, you can click in the right stick to start collecting data on him. In order to help the humans learn his weaknesses and figure out ways to beat him. Yeah?

King of Kaiju is a simple monster vs. monster brawl-fest in which several Kaiju dawn the cityscape. Defend mode spins it the other way and sets players in a defensive position as a friendly monster, in which they protect various parts of the city from the rampaging Godzilla.

The concept is cool, but the execution is very shallow, as it really just boils down to two monsters fighting one another until the other one stops and the prime minister declares the situation a “victory for humanity.” Meanwhile thousands of innocent people are having to be burnt off the streets because an giant angry lizard didn’t “get it.”

Developer Natsume Atari could have put much more effort into the accessibility of the game and visual approach, because in all reality this is not the Godzilla game you really want. It is fun smashing a few buildings down and putting Mothra in a suplex, and there is a big list of familiar monsters to unlock, but it wears thin quickly and offers little variety in its gameplay.

By Jeff Cater
Tags: Godzilla, Video Game Review
This entry was posted on Wednesday, August 5th, 2015 at 3:54 am and is filed under Jeff Cater, Video Game Reviews. You can follow any responses to this entry through the RSS 2.0 feed. Both comments and pings are currently closed.