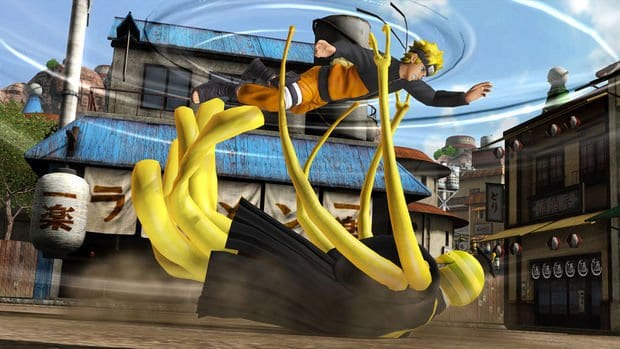 In case you’ve ever pondered who would beat the most snot out of the other in a fight between Ichigo Kurusaki (from Bleach) and Goku (from Dragonball Z), J-Stars Victory VS+ may have an answer for you. Developer Spike Chunsoft created a universe inside a universe containing many universes just so we can get the opportunity to battle with the likes of Monkey D. Luffy (One Piece) and Himura Kenshin (Rurouni Kenshin) on Planet Namek (Dragonball Z).

Yikes. Even though you’re in control of super speedy and agile characters, it never really feels that way. The trouble stems from the combat system’s unresponsiveness and how janky just about everything else feels. Modifying your primary attacks with R1 will produce a variety of different attacks, like a circling kick or more powerful projectile blast, but most fights can be ended by spamming square and triangle.

Sprinting with R2 locks your character on a straight path, making quick and precise movements nearly impossible, while combos have huge open windows of start-up frames and end-string sequences. It’s not uncommon to end up in a combo string, unable to cancel out of it, while your opponent makes their way to a rooftop or clearing. Locking on with L1 seldom helps and usually serves to completely disorientate the user because opponents are constantly jumping or flying around.

While character models look good and showcase some decent animation sets, they never once reach outstanding quality. Combos, while limited in quantity, are fun and true to their owners’ repertoire. Most of the super moves are pretty neat to look at and closely resemble their inspirations from their TV series and/or manga sets. Stage design ranges from great to ho-hum, but none of them really feature much interaction or liveliness aside from telephone poles, trees or buildings flying apart.

Although we’ve loved Dragonball Z dearly since childhood, we’ve never seen an original Japanese episode. Why is this relevant? Because Masako Nozawa, the original voice actress for Son Goku, provides the voice in J-Stars Victory VS+. This may have been awesome in the ’80s/’90s, but now she’s 78 years old and sounds every day of it.

No matter how angry Goku gets in this game, he sounds like a mad old lady. It’s terrible. It’s one thing to have accurate representation of your characters, but couldn’t anyone else have fit the bill? Upon hearing her voice, we paused the game hoping to find an option to switch to English audio. No luck there. So yes, it may be terrible to write these horrible things about a legend, but every other character is voiced so well that her performance stands out for all the wrong reasons.

So the gist of the story is that several characters from the Jump World have been summoned to a hub world with a singular quest — to win a fighting tournament. So naturally you sail the seas and fight other people sailing around, because it’s not possible to have a straightforward tournament. Instead, you have to have some boat that constantly has to be upgraded so you can fly.

The “story” is split into four different arcs, but the only thing that changes between them are the characters that you’re able to play as. Otherwise, it’s all sailing and fighting. The fighting is reasonably fun and should appeal to some people, but the action doesn’t feel important at all and is constantly interrupted by the sailing and narrative.

There’s an arcade mode and a versus mode (more on that in a minute) in J-Stars Victory VS+ in which you can just get down to the nitty gritty of fighting, which is the real way to play the game. Fights consist of one round that pits players in a two-on-two battle, with one additional support character that you can summon in L2.

To win, you must knock out your opponents three times and fill the “win” meter at the top. As noted earlier, however, the attack frames are picky and generally cannot be cancelled out of, so it’s very difficult to feel proficient even after considerable time, giving fights a sloppy feel throughout.

For a game with VS in the title, split-screen combat feels not entirely thought out and likely tacked on. Rather than having a different aspect ratio than that of the full-screen experience, Versus mode squishes each player’s perspective down and surrounds the image with gigantic health bars and super meter effects that could’ve easily been optimized to scale appropriately without the need for a screen-obscuring HUD.

As an idea, J-Stars Victory VS+ is utterly awesome, but the developers seemed to lose focus on what players really wanted. This should have exclusively been a fighter from the ground up. Unfortunately, it ends up more like a game with an identity crisis, not knowing quite which area to focus on.

By Jeff Cater
Tags: J-Stars Victory VS+
This entry was posted on Tuesday, July 28th, 2015 at 12:31 am and is filed under Jeff Cater, Video Game Reviews. You can follow any responses to this entry through the RSS 2.0 feed. You can skip to the end and leave a response. Pinging is currently not allowed.