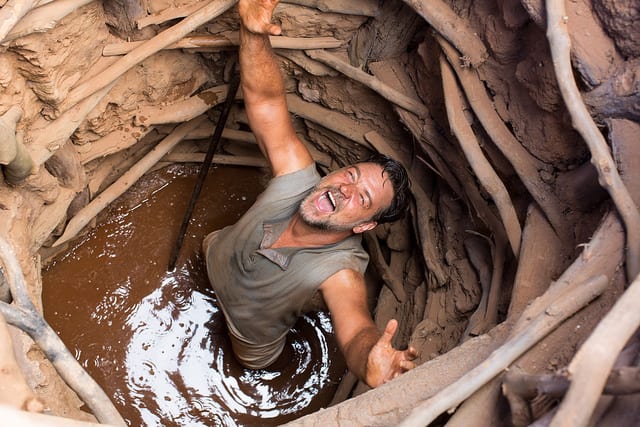 Are you not entertained!??!?

We all know Russell Crowe can act, portraying a wide range of characters and netting three straight Academy Award nominations for his work in The Insider, A Beautiful Mind and Gladiator, for which he took home the Oscar for Best Actor. Now in his 50s, Crowe is taking his talents behind the lens for his feature-length directorial debut in The Water Diviner — a film in which he also stars. Let’s see if Crowe can pull off double duty.

Upon arriving in Istanbul he’s led to a hotel run by Omer and Ayshe (Olga Kurylenko), whose husband (Omer’s brother) hasn’t been seen since leaving for war and is believed dead by pretty much everyone except Ayshe and her son, Orhan. Ayshe is mistrusting of Joshua’s Australian roots, but he develops a strong relationship with Orhan, softening her prickly disposition in the process.

Although forbidden by British officials from traveling to Lone Pine to search for his sons, Joshua finds alternate passage and ends up being befriended by Major Hasan, a Turkish officer assisting in the location of fallen soldiers, and his companion, Sergeant Jemal. Against all odds, Joshua uses his water divining skills to unearth two of his sons’ remains. The third, however, can’t be found, and when Hasan learns he may have been taken prisoner Joshua must track down his missing son.

Given his work under heavyweights like Ridley Scott and Ron Howard, it shouldn’t be a huge surprise that Crowe was up to the challenge of directing a feature film. Still, it was hardly a given, and Crowe shows an eye for cinematography and a deft touch in guiding a cast that features very few known commodities outside of Crowe himself — Kurylenko has had a couple of high-profile roles, opposite Tom Cruise in Oblivion and Daniel Craig in Quantum of Solace, while Jai Courtney (who appeared in Terminator Genisys) has a modest role as well.

Crowe not only does good work behind the camera, but he strikes the right chords as the strong but weary Joshua. He’s no action hero here, working obsessively to find his sons amid an unsettled situation in post-war Turkey. That unknown cast also delivers no shortage of strong performances in supporting roles, perhaps none more so than Jacqueline McKenzie in her brief time as Joshua’s wife.

The Water Diviner is visually striking, splitting its time between wide open areas of Australia, the hustle and bustle of Istanbul and the sad stillness of Gallipoli. Flashback sequences are handled with a grim focus, steering clear of any grandiose battle sequences that wouldn’t fit in a film that’s core themes are about loss and determination.

While The Water Diviner is admittedly historical fiction, it really tends to paint things in a largely positive light for Turkey. When Joshua confronts Hasan about the death of his sons, the latter retorts that they (the Australians) were the ones that invaded. Later, Hasan’s contingent is ambushed by Greek soldiers, who come across as the clear villains of the encounter.

The romance between Joshua and Ayshe is riddled with clichés as well. You’ve got the initial rejection (Ayshe doesn’t want an Australian staying at her hotel), the slow development of feelings as she sees the bond he forms with her son, the confrontation in which terrible things are said and then the eventual reconciliation and payoff. They both play their parts well, and there’s some chemistry despite the age difference (15 years), but it’s a journey we’ve all seen before.

There are only two extras: a 20-plus-minute “making of” feature and one that provides more info on the Battle of Gallipoli. Both are well made, though the making of has a number of breaks that make it seem like it was put together with commercials in mind. Some of the most interesting stuff focuses on the physical demands Crowe put on his actors (and himself). They’re worth watching.

There aren’t a lot of World War I movies out there, even fewer that don’t focus on U.S. involvement, and The Water Diviner does a nice job of providing an emotionally driven look at the aftermath while still mixing in enough action to keep the pacing up.

By HC Green
Tags: Academy Awards, Blu-ray reviews, Russell Crowe, The Water Diviner
This entry was posted on Sunday, July 26th, 2015 at 1:13 am and is filed under Herija Green, Movie Reviews. You can follow any responses to this entry through the RSS 2.0 feed. Both comments and pings are currently closed.