The Wire Troll: Casey Janssen Lobbying for Holds in Washington 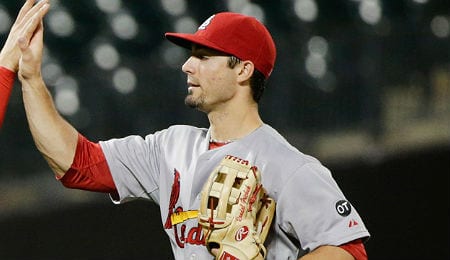 Welcome back to the unofficial second half of the Fantasy baseball season. Now’s the time you want to make your move with your league trade deadline likely looming and the waiver wire drying up somewhat. But still, there is help to found.

Before we get to this week’s Fantasy baseball waiver wire picks, congratulations to those of you that laid some cash down at your favourite bet sportsbook wagering that the Diamondbacks would beat the deadline to get No. 1 overall pick Dansby Swanson under contract.

Casey Janssen, RP, Washington Nationals (ESPN: 1.1 per cent; CBS: 3 per cent): Drew Storen is entrenched as the closer in Washington, but since returning from his shoulder injury former Toronto closer Janssen seems to have moved into the top setup role. Janssen has been harder to hit this year, and while his K rate leaves something to be desired (although you wouldn’t know it based on his showing against the O’s last week — see video below), he can help you in deeper holds leagues.

Randal Grichuk, OF, St. Louis Cardinals (ESPN: 27.1 per cent; CBS: 46 per cent): This isn’t the first time we’ve recommended Grichuk this season, but he remains unowned in more than half of Fantasy leagues despite bashing another two dingers Saturday. He’s been moved all over the Cardinal batting order, and is expected to hit second Sunday, reflecting the team’s confidence in his ability to not only drive the ball, but also to get on base.

Kennys Vargas, 1B, Minnesota Twins (ESPN: 1.3 per cent; CBS: 10 per cent): Vargas was banished to the minors a few weeks ago to make room for top prospect Miguel Sano, who is now dealing with an ankle injury. There’s been no talk of a DL stint for Sano yet, but Vargas — who bashed two homers at Double-A on Saturday — would likely be in line to return to the Twins if it came to that. Either we, we’re convinced that Vargas remains an important part of the future in Minnesota, especially once the patience he showed in Winter League ball follows him stateside. There’s tremendous power upside here, making him a fine keeper league asset even if he doesn’t re-emerge in the majors this season.

Aaron Judge, OF, New York Yankees (ESPN: 1.8 per cent; CBS: 16 per cent): Another stellar keeper league option (those of you playing out the string in the second half should still pay attention to the future, and don’t worry — we won’t forget about your needs), Judge is a prospect that the Yankees are refusing to part with at the trade deadline. He’s hit safely in five straight at Triple-A to get his BA back to .275 through 21 games and, overall in the minors this season, he’s accumulated some impressive counting cat numbers. Judge is a monster (6’7″, 275), but is well proportioned and should wind up as an above average player in time thanks to his power and arm strength.

Jake McGee, RP, Tampa Bay Rays (ESPN: 34.6 per cent; CBS: 34 per cent): McGee remains of the better set-up options available to Fantasy owners, but perhaps he’s about to become even more valuable. Brad Boxberger has done well since assuming control as the Rays’ closer but for some reason it was Boxberger summoned in the eighth inning Saturday and after he walked one and hit another, McGee came in to bag his fourth save of the year. Keep an eye on this situation and if you feel like jumping the gun with a speculative pickup of McGee, it wouldn’t be a bad play either way.

Kelly Johnson, OF/1B/3B, Atlanta Braves (ESPN: 22.9 per cent; CBS: 19 per cent): Returning this season to where it all began for him, Johnson has been seeing the bulk of the time at first base for the Braves recently. With news that Freddie Freeman’s wrist is still not healed sufficiently for him to begin a rehab assignment, Johnson will continue to see plenty of action for now. Johnson’s speed seems to have disappeared this year and his solid OBP skills are eroding, but he still has power (nine homers in 60 games). Toss in that multi-position eligibility and you’ve got yourself — at the very least — a nice bench option that can pick up you up at several positions.

R.A. Dickey, SP, Toronto Blue Jays (ESPN: 20 per cent; CBS: 33 per cent): No UCL in his right elbow? No problem. Dickey has seven quality outings in his last eight starts, and while the losses keep piling up, his ERA is much more palatable and his control is looking far sharper in recent weeks.

A.J. Ellis, C, Los Angeles Dodgers (ESPN: 0.2 per cent; CBS: 1 per cent): Yasmani Grandal had to leave early Sunday after taking a foul ball off his mask. He’s had concussion issues already this season, so another one would open the door for Ellis. Ellis, the former All-Ohio Valley Conference first team selection, has shown more extra-base pop this year.

Ryan Madson, RP, Kansas City Royals (ESPN: 1.7 per cent; CBS: 2 per cent): Madson was the last man to make the Royals out of Spring Training, and he’s rewarded them with a stellar season (1.91 ERA through 40 games with 10 holds). He would more value in a less talented bullpen, but the fact that he’s still generating use in deeper AL-only leagues is a testament to the fact he is back at last.

John Lamb, SP, Kansas City Royals (ESPN: unowned; CBS: 2 per cent): Sure, he was brought up for about two hours as the 26th man in a doubleheader last week, but why haven’t the Royals given Lamb a legitimate crack in the majors yet? He’s been simply dominating the PCL this season and could help stabilize the Royals’ rotation if they’d just clue in to what they have on their hands. At any rate, Lamb is back to being a solid keeper league asset.

Crave more in-depth Fantasy analysis? Then join us every Thursday at 9 p.m. EST for RotoRob Fantasy Baseball Weekly Podcast on Blogtalkradio as we entertain and edify you for an hour or more each week. We’ll be off this week as Rob celebrates his birthday, but return live on July 30 with guest Hafeez Noorani of DraftTeam.com. Tune in here.

By RotoRob
Tags: Casey Janssen
This entry was posted on Sunday, July 19th, 2015 at 5:18 pm and is filed under BASEBALL, RotoRob, The Wire Troll. You can follow any responses to this entry through the RSS 2.0 feed. Both comments and pings are currently closed.