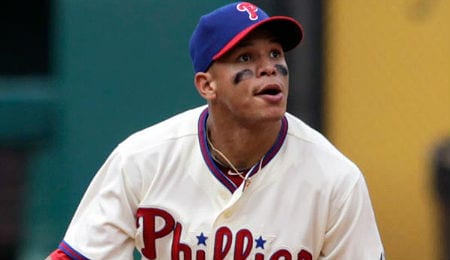 Welcome back to another week of Fantasy baseball waiver wire recommendations. We’re into July now, so are basically halfway home. Miguel Cabrera has landed on the DL for the first time ever; Stephen Strasburg is having more health issues; and Ervin Santana’s PED-related suspension is up.

And now to this week’s Fantasy baseball waiver wire picks…

Cesar Hernandez, 2B, Philadelphia Phillies (ESPN: 47.5 per cent; CBS: 41 per cent): Hernandez is a player that’s flown under the Fantasy radar for some time now, but we need to start giving him the props he deserves. He’s been a hot commodity on the waiver wire lately, yet is still widely available — but probably not for long the way things are going with his current nine-game hitting streak in which he’s raised his BA by 46 points. (See video below for a look at Hernandez delivering for the Phillies.) With Chase Utley out until at least the end of the month, Hernandez will continue to see regular PT for the next three weeks or longer. And who knows? It’s not inconceivable that Hernandez keeps the job even after Utley gets healthy.

Ervin Santana, SP, Minnesota Twins (ESPN: 20.6 per cent; CBS: 49 per cent): Santana’s PED suspension ended Saturday and he is scheduled to make his Twins’ debut on Sunday. The well-travelled veteran wasn’t as sharp in his only season in Atlanta in 2014, yet still posted a solid record with plenty of Ks. Need pitching help? Look no further.

Patrick Corbin, SP, Arizona Diamondbacks (ESPN: 24.8 per cent; CBS: 47 per cent): Another veteran making his season debut this weekend, Corbin returned from Tommy John surgery Saturday, tossing five decent innings to beat the Rockies. This dude has phenomenal control (averaging just 2.22 BB/9 in his career) and the fact that he didn’t walk anyone in his comeback from TJS is telling. Miss out on Santana? This is a pretty damn solid consolation prize.

Jose Iglesias, SS, Detroit Tigers (ESPN: 37.8 per cent; CBS: 43 per cent): Acquired by the Tigers in a three-team deal two years ago, Iglesias didn’t hit as well in Detroit after the deal and then missed all of 2014 with shin problems. But he’s showing his value this season — beyond his amazing glovework, that is — by hitting .377 in April, .299 in May, .293 in June and .300 so far in July. We’d like to see better work on the basepaths (9-for-14 in stolen base attempts), but it’s hard to argue with a .320 hitting shortstop, even if he doesn’t contribute much beyond this one category.

Chase Headley, 3B, New York Yankees (ESPN: 17 per cent; CBS: 45 per cent): The Padres’ second round pick in 2005, Headley hit well down the stretch after getting traded to the Yankees last year, but this season has been a disappointment. He’s scoring plenty of runs in an improved Yankee offense, but the extra base power has regressed. Still, Headley is off to a solid start this month, putting an ugly June behind him, and he’s been a much better second half player in recent years (872 second half OPS compared to 709 in first half over the last three seasons), so now is a great time to consider him.

Cody Anderson, SP, Cleveland Indians (ESPN: 39.7 per cent; CBS: 42 per cent): Another one of those “out of nowhere” waiver wire darlings, Anderson hasn’t been striking out many, but through his first three big league starts, he’s got an ERA of 0.76, a WHIP of 0.63 and opponents are hitting just .171 against him. Keep rolling this kid out there until the league figures him out.

Gerardo Parra, OF, Milwaukee Brewers (ESPN: 22.7 per cent; CBS: 35 per cent): With both Carlos Gomez and Khris Davis dealing with injuries this season, Parra has played more than expected and has really delivered, riding a current streak of four straight multi-hit efforts to jack his BA up to .306. A .480 showing in the last week has punctuated what’s been the best hitting performance of his career in 2015. Note that Gomez won’t be out for long and Davis is expected back very soon, so this is a short-term pickup at best.

Tim Cooney, SP, St. Louis Cardinals (ESPN: 0.5 per cent; CBS: 1 per cent): Cooney looked really good in his last outing, tossing a quality start against the Padres on Thursday, and he’s going to stick around a bit now that Jaime Garcia is hurt. The rookie Cooney was touched up pretty hard in his first outing, but may have settled down now. Judging by how well he pitched at Triple-A this season, it’s worth picking him up — at least in NL-only leagues — to find out.

Luis Severino, SP, New York Yankees (ESPN: 1.8 per cent; CBS: 16 per cent): More of a long-term keeper league option, Severino has impressed enough at Triple-A to make you think he can help the Yankees this year. They are loathe to deal him, but there’s talk he could be moved to land Jeff Samardzija from the Pale Hose. At any rate, Severino is a kid you want to grab now in any dynasty format and watch very closely in all other leagues.

By RotoRob
Tags: Cesar Hernandez, Chase Utley, Wally Pipp
This entry was posted on Sunday, July 5th, 2015 at 7:49 pm and is filed under BASEBALL, RotoRob, The Wire Troll. You can follow any responses to this entry through the RSS 2.0 feed. Both comments and pings are currently closed.