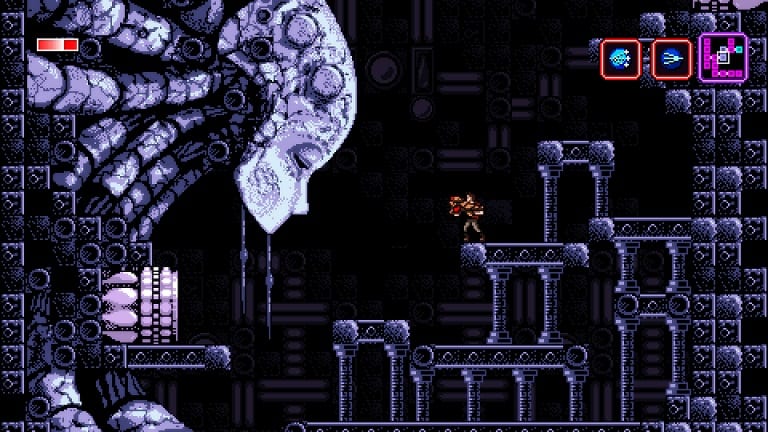 On the verge of greatness…

Things start out very simple with Axiom Verge, but as you acquire more abilities the controller starts to fill up with various functions — perhaps the most critical of which is holding down L1, which allows you to stand still and fire in eight directions, greatly improving accuracy in the process.

We ran into trouble with the game reading the input, however, and we’d routinely have to press it multiple times before the lock icon appeared on the screen. The issue persisted across multiple controllers, so it seems unlikely it was a hardware issue.

Occasional frustrations with anchoring down aside, the game handles very smoothly regardless of how many (or how few) skills you’ve unlocked. There might be a brief adjustment period as you get used to the feel of the jump, but once that clicks you’ll be running, jumping and shooting with ease.

There are two caveats: First, the grappling hook, which always felt a little sloppy and inconsistent in regards to when you’d let go and how far you’d travel upon release. And second, teleportation. It’s done by double tapping in the direction you want to go, but we found it happening through natural use of the controller with occasionally frustrating results.

If you grew up during the time of 8- and 16-bit consoles, or have developed an appreciation for the graphical styling of that era, you’re going to love Axiom Verge’s presentation. There’s tremendous diversity in the environments as you move from one section of the world to another, and there’s a wide range of creatures to inhabit them. The design begs for constant exploration, leading to plenty of time spent searching for hidden areas and collectibles.

While the graphical half of the presentation is delightful, the soundtrack may be even better. It starts with awesome music at the title screen and never looks back with unique chip tunes that provide a perfect accompaniment to the action. Great stuff all the way around.

As you probably surmised when we called it an homage to Metroid, Axiom Verge adheres to the Metroidvania style of progression in which you’ll routinely encounter areas or obstacles you cannot overcome as equipped, and must therefore return after collecting new items or abilities. It’s one of our favourite setups, and it’s faithfully executed here — in fact, it’s a little too faithful.

Unquestionably the biggest problem with the game is its map. The world is divided into sections, and each section’s map is made up of tiny squares. Outside of some minor colour coding to show boss/save rooms, small dashes to indicate exits and arrows that show where the sections connect no information is present. You can’t even zoom in or move freely from section to section based on layout (you can only cycle through them in a set order).

While a weak map might be a mere inconvenience in some cases, with Axiom Verge containing over 900 rooms it’s a legitimate issue that leads to lots of time wandering aimlessly trying to find your next objective. It’s fine if the developer didn’t want to include an objective marker, but it should’ve at least made the map a more viable tool — perhaps by colour coding the exits so it’d be obvious which areas could be explored after acquiring a new item.

Assuming you can get past the archaic map and lack of clear, moment-to-moment direction there’s a lot of strong level design, enjoyable gameplay and memorable boss fights on offer. There’s a story that’s semi-interesting as well, in which a scientist named Trace is brought into this strange world and enlisted to save massive robotic creatures by toppling an evil demon and his minions.

The game seems to think more highly of its fiction than we did, though, often “rewarding” players who find hidden paths with diary pages that flesh out the story. Unless you’re a completionist, odds are when you encounter those journals you’ll be disappointed it wasn’t a more useful payoff, such as nodes to upgrade health or power, or new weapons to expand your sizable arsenal.

Indeed, if there’s one area in which Axiom Verge strays most noticeably from the early Metroid games is in its focus on combat. As noted, you’ll have a lot of guns firing all different kinds of projectiles at your disposal, and there is an impressive number of enemy types to shoot at. It’s generally enjoyable, though figuring out the proper weapon against later bosses felt like a grind.

Ultimately your enjoyment of Axiom Verge is going to come down to how much you can embrace the retro feel of its exploration. There are definite moments of exhilaration that come from locating a hidden path or finding the item needed to advance, but you have to be on board with plenty of backtracking and fruitless expeditions.

Our first playthrough took more than 15 hours to complete, and we didn’t find everything, but the presence of “speed run” mode tells you the whole trip can be made in considerably less time once you know where you need to go.

There’s a ton to like about Axiom Verge and it’s absolutely worth getting, but we can’t help but feel that a handful of concessions to modern gaming would’ve really helped elevate it to another level.

By HC Green
Tags: Axiom Verge, Thomas Happ
This entry was posted on Monday, March 30th, 2015 at 5:52 pm and is filed under Herija Green, Video Game Reviews. You can follow any responses to this entry through the RSS 2.0 feed. Both comments and pings are currently closed.