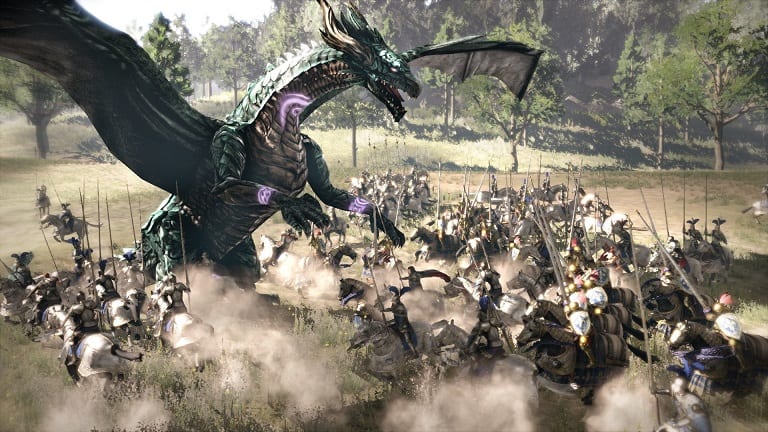 This will not be in How to Train Your Dragon 4.

A few years ago, Koei and Omega Force took players to the medieval battlefields of Champagne and Normandy to fight the good fight as a mercenary. The war rages between England and France and has for ages before you even become involved, thus setting the stage for Bladestorm: The Hundred Years’ War. Now we’re revisiting that war on next gen and adding a few twists with Bladestorm: Nightmare.

There is definitely a period of adjustment when playing Bladestorm. Unlike Koei’s usual take on the battlefield, a la Dynasty Warriors, Bladestorm is more about unit tactics and a rock-paper-scissors style of combat.

After creating your mercenary and selecting the field of battle, you may issue commands to troop types found on the front line. This is done by pressing “X” near the corresponding unit’s banner, but you may only control squads that you’ve previously learned how to lead via profession books.

Further separating itself from the Dynasty series, combat is a much slower, calculated process. Holding R1 will lock your squad into attack mode, and they begin to attack any enemy nearby. After pummeling your enemies, you may reassemble your formation by pulling R2.

Depending on what type of squad you are currently in charge of, the face buttons will perform a variety of different attacks on cool down timers. If you’ve taken command of a set of archers, pressing a button might have each archer find a target and let loose, whereas if you’re controlling a squad of Men-at-Arms you can expect that same button to perform a vicious tackle.

At any time you can summon a squad of soldiers determined by your choices at the tavern hub, and pulling L1 and pressing the corresponding button will bring them to the battlefield to replace your current squad.

Of all the games we never expected to have an HD update, Bladestorm was close to the top of the list (along with Snow Brothers and Snake, Rattle, and Roll), but we came away surprisingly pleased at just how good the game looks in comparison to its previous iteration.

The all-important sun bleeds gracefully through branches of pine trees and coats the lakes and rivers with a beautifully blooming shimmer effect. The amount of foliage on-screen has also been bumped up drastically, but there is still a slight case of pop-in — albeit only with objects far away, which is pretty difficult to notice in the midst of battle.

Character models don’t seem to be pumped up with more polygons (at least from what we could tell), but the texture work has been upped significantly. The ground doesn’t look like a bland patch of dirt anymore, and important characters are now much easier to identify and remember.

Both the English and Japanese voice acting is pretty well done, save for the French barkeep. That accent makes us chuckle every time we hear “Marthenaries” or “Come! Back to us in one PIECE!” In battle, it’s complete aural chaos with swords bearing down on metal shields and cries for help and for war.

The goal of Bladestorm: Nightmare is to create a badass mercenary and lead squads of English or French forces to victory in a wide variety of battle placements. That being said, the war takes place entirely between England and France, so the map doesn’t really change too much unless you select another location to venture forth to or deploy at.

Moseying from location to location can be somewhat dull and tiresome in between skirmishes, but we think this mostly serves to show just how brutal and long this battle was. The real goal (in our eyes) was to keep switching sides during the war in order to prolong it since a longer war equals more money for our merc. You’ll fight alongside kings and princes, thieves and scum, all modeled after their real-life legends.

Now, the all-new Nightmare mode adds a significant twist to the story and land itself. Led by the (allegedly) evil Jeanne D’Arc, thousands of monsters have appeared recently, apparently under her rule. With their differences (at least temporarily) put aside, England and France must band together to fight the demon hoards.

What their long-term goal is may be is shrouded in mystery until you kill enough abominations and re-take enough territory. You are also able to command some of these monsters after establishing dominance over them, which is generally done by taking over one of their bases.

While mostly enjoyable, it’s worth noting that Bladestorm: Nightmare indeed suffers from a few of the same issues as the original game, such as framerate troubles during intense bouts of combat. Plus, it still feels like it is too easy after upgrading a favoured squad as they become overpowered too quickly.

As with its predecessor, Bladestorm: Nightmare isn’t for everybody. It is, however, a very unique game that deserves a look from anyone who enjoys the Dynasty Warriors series but may have been looking for battles that took place on a greater scale. Sure, it has a few issues, but they could easily be hammered out with a patch or two. Refine the frame rate a bit, tone down the speed of leveling and you’ve got a fixed-up Bladestorm: Nightmare!

By Jeff Cater
Tags: Bladestorm Nightmare, Koei
This entry was posted on Friday, March 27th, 2015 at 4:26 pm and is filed under Jeff Cater, Video Game Reviews. You can follow any responses to this entry through the RSS 2.0 feed. Both comments and pings are currently closed.