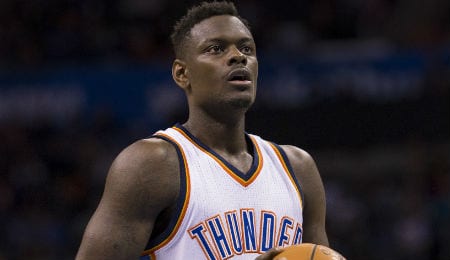 Anthony Morrow has been lighting it up for the Thunder. (Probasketballtalk.nbcsports.com)

Welcome back to another week of Fantasy basketball. Two-time MVP Steve Nash has officially hung ’em up; Kevin Durant has been shut down and his season is in jeopardy; and Marcus Smart has earned himself a one-game suspension for a low blow.

This is the perfect weekend to raid the waiver wire. As most of your fellow owners are engrossed in March Madness, you have a great opportunity to get the pick of the Fantasy basketball litter. Without further ado, let’s reveal those picks, shall we?

Randy Foye, PG/SG, Denver Nuggets (ESPN: 8.3 per cent; CBS: 18 per cent): Foye is a nice late season option if you need a three-point shooter. Over the past four games, he’s scored 16 or more and has made 15 three pointers in that span. Foye’s assist numbers aren’t bad, and he is a good free throw shooter also. He could be a big help to your team.

Anthony Morrow, SG/SF, Oklahoma City Thunder (ESPN: 5.8 per cent; CBS: 11 per cent): This is a similar situation to Foye as Morrow has 19 threes on 54 per cent shooting from deep in his past five games. That’s about all he does but with Durant possibly done for the season, Morrow is a nice pick up if you are dropping Durant. We slotted Morrow 36th in our Small Forward Rankings this season, but he’s only been around 45th so far thanks to some injuries and the fact that he’s been used off the bench exclusively. With a late season push, however, he could reach our predictions and perhaps even exceed them. The undrafted perimeter specialist really started lighting it up for OKC just over a month ago (see video below).

Channing Frye, PF/C, Orlando Magic (ESPN: 2.9 per cent; CBS: 31 per cent): Last month, Frye found himself losing PT to Dewayne Dedmon, and he actually wound up losing his starting gig. Now Dedmon (ankle) is out, allowing Frye to move back into the starting five and he’s responded with back-to-back doubled-digit scoring efforts. Frye’s overall game has gone downhill the past three seasons, but he can still help you out in three-pointers and points.

Marcus Morris, SF/PF, Phoenix Suns (ESPN: 6.2 per cent; CBS: 37 per cent): We slotted Morris 34th in the Small Forward Rankings, but he’s mostly played the four this season, and has only been around a top 55 at the position despite the fact he’s sinking more buckets. Recent injuries in Phoenix have opened up more PT for him lately and Morris has found himself starting with Brandon Knight sidelined. Morris responded with 18- and 20-point games last weekend and on Thursday, he ripped down 13 boards. When Coach Jeff Hornacek goes big, he likes having Morris in the lineup.

Zaza Pachulia, Milwaukee Bucks (ESPN: 7.1 per cent; CBS: 28 per cent): On Friday, Pachulia put up 22 points, 21 rebounds and seven assists. While it was a triple overtime game, it doesn’t look like that factored into his statline as much as some might think. Pachulia now has six straight games in double digit points and four double-doubles over this stretch. He’s a very nice pickup moving forward and can give you a boost if you need a big.

Steven Adams, Oklahoma City Thunder (ESPN: 16 per cent; CBS: 45 per cent): Adams needs to be picked up immediately. Since taking over the starting job from injured Serge Ibaka, Adams is averaging 14 points along with 12 rebounds. With Enes Kanter, Nick Collison and Durant all out for extended periods (along with Ibaka), Adams is going to have to step up if the Thunder wants to make the playoffs.

By McCade Pearson
Tags: Steve Nash
This entry was posted on Saturday, March 21st, 2015 at 8:51 pm and is filed under BASKETBALL, McCade Pearson, The Wire Troll. You can follow any responses to this entry through the RSS 2.0 feed. Both comments and pings are currently closed.