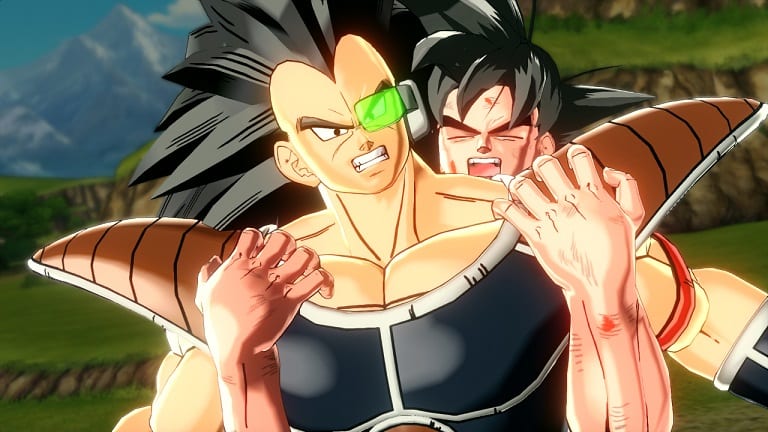 Goku loves Raditz, but it’s not that kind of love…

Developer Dimps has seemingly been charging its Ki to insane levels lately, letting loose a blast like Dragon Ball Xenoverse. Build a character, train as hard as you can and maybe, just maybe, you can help Earth against one of the greatest foes it has ever faced: time.

We’d honestly found it very difficult to get used to any Dragon Ball game before XenoVerse. Dimps seemed to leave no stone unturned, however, and made crucial refinements when it comes to button response and comfort. The result: Dragon Ball Xenoverse feels absolutely great!

To cope with the intense 3D combat, you may lock onto an opponent with the right bumper. Once locked, you may orbit freely around them with the left stick — you can switch targets with a flick of the right stick, though it doesn’t work the way it should.

Initially, combat feels shallow, but throw enough punches and you’ll realize the true depth. Any attack can usually be followed gracefully by a charged attack (holding down the “Y” button after a flurry of regular “X” attacks) or a super move. Pulling the right trigger while fighting brings up a small move list displaying your super moves, like the Galick Gun or Kamehameha. Pull the left trigger in conjunction with the right and you’ll bring up your Ultimate Moves.

The only really clumsy part is the mid-combat inventory system: tapping right on the d-pad will bring up a menu with your selected inventory items, and pressing the corresponding face button will use the item. The trouble comes when you have to manually close the item menu after using something, rather than it automatically closing upon consumption. This leads to many wasted energy capsules (think health potions) as you’re still in a passive state with that menu open and the usual combat buttons remain bound to the item selections.

Damn! It’s almost as if Dragon Ball Z has literally come to life! Not only are character designs spot on, the characters themselves are just as full of expression as they were in the show. During combat you may see someone’s eyes bulge from a good punch, and you will definitely see Dragon Ball’s trademark exaggerated scream face during super moves.

Animation sets further the resemblance to the show, everything from Goku’s Kamehameha stance to the flurry of blows between two opponents locked together look absolutely amazing. You’ll also see several locations that you can visually identify from the show, like the Saiyan invasion sites of Earth and Planet Namek.

While the hub world is pretty barren of voice acting, the rest of the game is chock full of quality readings. Frieza’s cold, puny voice is still irritating as hell and Picolo (or Mr. Picolo) is just as gruff as he’s always been. The music accompanying any scene can go from the playful, flute-filled fanfares of victory to the intense Japanese butt-rock the series is known for, so both visually and aurally there’s a complete package here.

Someone is messing around with the timeline of Earth and turning the victors of major battles into the losers, and it seems to be just out of Goku’s ability to rectify. This is where you come in as a Time Patroller under the guidance of Trunks. You create a character from a few different races such as Human, Saiyan, Buu, Namekian, or Frieza, and then you begin your job patching up time.

Fixing time means visiting the most memorable moments in Dragon Ball history, from ensuring victory against an amped-up version of Ape Vegeta to fighting the entirety of the Ginyu Force and seeing characters grow just as they did throughout the show.

As you level up you will unlock more skills and pieces of gear to buy, and you can also train under a Master. Training under a Master involves beating them up to prove your worth (beating up Vegeta is satisfying). Eventually, after you break level barriers, they will challenge you to additional duels to learn more and more moves. This feature alone is just awesome because you can make a Dragon Ball character true to your vision.

One of the big pulls for Xenoverse is that it’s very online friendly. There’s co-op battles to partake in and PVP tournaments to sign up for. Having trouble with a mission? Let a friend in on it and you may stand a better chance! Think you’re a better Super Saiyan than Jimmy? See if you can land a “Vacation Delete” on him!

It thrills us greatly to see such a unique and fun game set in the Dragon Ball universe! Everything in Dragon Ball Xenoverse, from the combat to the sound and look of the game, is true to its inspiration. It deserves a place in many gamers’ collections.

By Jeff Cater
Tags: Dimps
This entry was posted on Wednesday, March 18th, 2015 at 11:57 am and is filed under Jeff Cater, Video Game Reviews. You can follow any responses to this entry through the RSS 2.0 feed. Both comments and pings are currently closed.