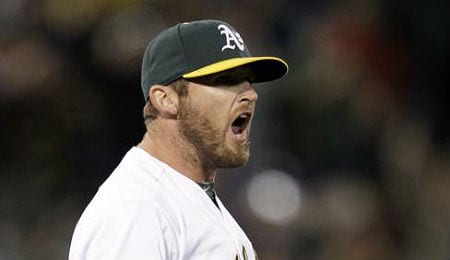 Could Ryan Cook wind up in Triple-A? (Ben Margot, AP)

Oakland Athletics righty Ryan Cook, a top 50 reliever the past two seasons, but out of our top 100 this year, could possibly find himself without a big league role soon.

Last year, he struggled in August (6.10 ERA) and then experienced some wildness in September (three walks in 5 2/3 IP — all of which came in a key outing) as Cook was unable to come close to the brilliance he exhibited in 2012 and 2013. In the first half of the season, he missed almost a month with a forearm strain (often a precursor to Tommy John surgery, and certainly a red flag).

As a result, Cook only pitched 50 innings in 2014, and while his strikeout rate was up slightly, his ERA rose for the second straight season and he only managed a fraction of the holds he had in the previous two seasons.

The latest blowup occurred Monday when Cook was summoned in the bottom of the eighth to hold a 4-2 lead over the Dodgers. Um, ya. He lasted one-third of a inning and got charged with six runs off four hits (including a grand slam) and a walk. This isn’t exactly making him a target for autograph hounds (see video below).

Cook’s ERA this spring has ballooned to a team-worst 18.90 as he’s now surrendered 10 runs, seven of which were earned, over 3 1/3 IP with 11 hits and one walk allowed. The former USC Trojan has fanned just two.

The thing is, Cook’s being cuffed around by a lot of minor league players. Yes, he was an All-Star in 2012, but he sure isn’t playing the part right now.

Even with closer Sean Doolittle scheduled to begin the season on the DL, Oakland may have enough depth that Cook could wind up at Triple-A. That would be a massive disappointment considering that just a few weeks ago Cook was being looked at as one of the possibilities to take Doolittle’s role at the outset of the season. But now Cook has slipped on the set-up charts, never mind getting a shot at the most important job in the bullpen.

This, combined with last year’s injury scare and this spring’s debacle, has us worried about Cook’s short-term future.

Now it’s your turn. What are your expectations of Cook this season?

By RotoRob
Tags: Oakland Athletics
This entry was posted on Wednesday, March 18th, 2015 at 8:08 pm and is filed under BASEBALL, Player profile, RotoRob. You can follow any responses to this entry through the RSS 2.0 feed. Both comments and pings are currently closed.