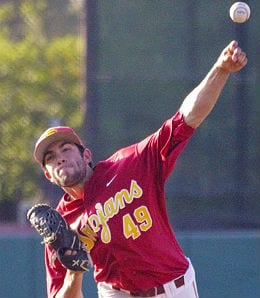 Marc Huberman has developed into a workhorse for USC. (Shotgun Spratling)

The University of Southern California Trojans — finally defeated earlier this week after a 12-0 start — will find out whether they are contenders or pretenders this weekend at the Dodger Stadium College Baseball Classic.

The 25th-ranked (according to Baseball America) Trojans face No. 7 TCU, top-ranked Vanderbilt and No. 6 UCLA. Yup, USC’s amazing start could come crashing down hard and fast over the next few days. Let’s face it, sweeping Fordham (1-8) isn’t a true test of a team’s mettle.

Trojan reliever Jeff Paschke had an adventure in his last outing (before his mess was cleaned up by closer Kyle Davis). Other than that, Paschke has been very sharp, going 1-0 with a 1.59 ERA in five games with just four hits allowed in 5 2/3 IP. He’s struck out four and held opponents to a .211 BA.

The Sophomore was a two-way player last summer in the Alaska League, but has only pitched for the Trojans so far this year. Last year as a walk-on at USC, he spent time as an infielder and as a pitcher. Paschke scored four runs and hit .250 in limited at-bats as a true freshman. On the mound, he worked almost exclusively out of the pen, making just one start. Paschke dealt with some control issues (14 walks in 28 IP), something he continues to struggle with this season.

He was an even better hitter than pitcher in high school (see video below), but his future appears to be on the mound — assuming he can address his wildness.

Suffering the first loss of the year for the Trojans was lefty junior Marc Huberman, although he was not charged with an earned run. In fact, the workhorse (he’s appeared in over half the team’s games so far) has still yet to surrender an earned run. Huberman is 2-1 with two saves and he’s allowed six hits and four walks over 8 1/3 IP with 10 Ks. Opponents are batting just .240 against him.

Last summer, Huberman made the New England Collegiate Baseball League Southern Division All-Star team after recording a sub-1.75 ERA in 26 IP. He made nice strides as a sophomore last year, going 1-1 with a 4.26 ERA and 16 strikeouts in 12 2/3 IP. Huberman continued to allow too many baserunners (1.89 WHIP), but he’s taken a big step forward in that regard so far in 2015. His best weapon is his slider.

Freshman reliever Mason Perryman played an important role in helping wrap up the Trojans’ last win. He’s pitched in four games so far (one start) and is 0-0 with a 3.52 ERA. The 10 hits allowed in 7 2/3 IP does not bode well, but Perryman has fanned six.

He enjoyed a stellar high school career at Bakersfield HS as a four-year letterwinner. Student Sports ranked Perryman as the No. 9 pitcher in the country coming out of high school. Perryman’s fastball ranged from 85-89 mph, and the 6’5″ righty also threw a curveball and changeup. He’s drawn comparisons to Mike Witt because of his build and delivery.

Perryman was considered a draft prospect last year, but because of his commitment to USC, he remained undrafted.

Now it’s your turn. Let us know in the comments below which Trojans you’re tracking.

By RotoRob
Tags: University of Southern California Trojans
This entry was posted on Thursday, March 5th, 2015 at 5:15 pm and is filed under BASEBALL, College sports, RotoRob, Scouting Report. You can follow any responses to this entry through the RSS 2.0 feed. Both comments and pings are currently closed.