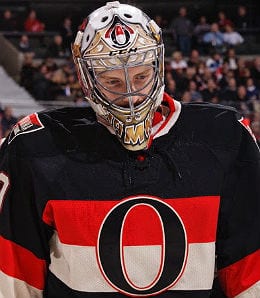 Andrew Hammond may be that shot in the arm your Fantasy hockey team needs. (Ilovegoalies.blogspot.com)

Andrew Hammond, G, Ottawa Senators (ESPN: 17.4 per cent; CBS: 25 per cent): This time of year, every Fantasy owner (not to mention real life NHL GM) is looking for that special player that can put them over the top. With many goaltenders out of the lineup with injuries, it can be hard to ice a respectable Fantasy goaltending tandem. If this is what you’re facing, you need to check out Hammond now.

An undrafted native of White Rock, BC, he has burst onto the NHL scene as a 27-year-old rookie for the Sens. He played parts of three seasons with three different BCHL Junior teams before a four-year NCAA career with Bowling Green from 2009-2013. The 6’3″, 190-pounder got into one game with Ottawa last season after signing with the club, collecting a shutout before being sent back to Binghamton where he received regular starting time. Hammond’s AHL numbers this season have been abysmal (3.51 GAA, .898 save percentage in 25 games), but you wouldn’t know it by his play in the NHL. In six games played, the rook has five wins, a 1.31 goals against average, a .957 save percentage and two shutouts, making us wonder just how bad the Baby Sens defense was in front of him in Binghamton.

Even when the other team scores on this dude, it barely crosses the line (see video below).

Right now, Hammond is in command in Canada’s capital city. Craig Anderson is still out with a hand injury and Robin Lehner is also on the shelf with a concussion. This is Hammond’s net. He has taken the ball and run with it, and we suggest you do, too.

Matt Cullen, C, Nashville Predators (ESPN: 0.4 per cent; CBS: 1 per cent): Cullen doesn’t put up a lot of points at this point in his career, but he had a pretty solid Week 20 for the league-leading Preds. In four games, Cully had a goal, five points, a plus-6 rating, four penalty minutes, seven shots on goal, 12 face-offs won and a block. He has six goals, 19 points and a plus-9 rating in 48 games this season. Cullen could be a sneaky pickup in leagues with 12 or more teams.

Reilly Smith, RW, Boston Bruins (ESPN: 18.8 per cent; CBS: 50 per cent): Smith is someone you need to pick up now. The Bruins winger had a goal, five points, a plus-4 rating, a power play point, eight shots on goal and a blocked shot last week as Boston fought for control of the last wild card spot in the East. He has 12 goals, 35 points and a plus-11 rating in 62 games this season.

Justin Fontaine, RW, Minnesota Wild (ESPN: 0.7 per cent; CBS: 2 per cent): The best part about the undrafted Fontaine is that he fits nearly anywhere in the lineup with his versatile style of play. He had a goal, four points, a plus-6 rating, two penalty minutes, a game-winning goal, seven shots on goal and a face-off won in three games last week. Fonzie has four goals and nine points in his last eight games, and a total of eight goals and 22 points with a plus-11 rating on the season.

Chris Stewart, RW, Buffalo Sabres (ESPN: 5.5 per cent; CBS: 24 per cent): Stewart had a pretty solid Week 20 with two goals, three points, eight penalty minutes, a power play point, eight shots on goal, a face-off won and five hits. He has 11 goals and 25 points in 61 games with the Sabres this season. If the big power forward is traded Sunday or Monday, his Fantasy stock could rise. Keep your eyes on this one.

No. 1. Andrew Hammond, G, Ottawa Senators: Hammond is the only thing keeping Ottawa’s slim playoff hopes alive. In three starts last week, he had three wins, a 0.67 goals against average, a .978 save percentage and two shutouts in a sweep of California.

No. 2. Claude Giroux, C/RW, Philadelphia Flyers: Giroux’s two goals and four points on the week aren’t all that impressive, but he also was a factor in other Fantasy categories with six penalty minutes, four power play points, 19 shots on goal, 52 face-offs won, seven hits and two blocked shots. Better yet, he’s showing leadership as the Flyers slowly creep back into playoff contention.

No. 3. P.K. Subban, D, Montreal Canadiens: What a monstrous week for Subban. In three games in Week 20, he had a goal, six points, a plus-8 rating, eight penalty minutes, a power play point, six shots on goal, two hits and five blocks. For the season, Subban is tied with Calgary’s Mark Giordano for points by a defenseman.

No. 1. Mike Smith, G, Arizona Coyotes: Smith has been without question the worst goaltender in the league this season. Last week certainly didn’t help either. In four appearances, he had zero wins, 15 goals against for a 4.28 goals against average and an .879 save percentage.

No. 2. Semyon Varlamov, G, Colorado Avalanche: Varlamov fared little better, but did manage to collect two wins with a 4.03 goals against average and an .884 save percentage in four starts. Maybe he needs a rest after starting 19 straight games.

No. 3. Jhonas Enroth, G, Dallas Stars: Many, like our NHL Editor, were hoping a change of scenery would be just the ticket for Enroth. Unfortunately, that hasn’t happened. In two games in Week 20, the tiny (5’10”, 165) Swede had nine goals against, a 4.55 goals against average and an .847 save percentage.

By Dakota Case
Tags: Andrew Hammond
This entry was posted on Sunday, March 1st, 2015 at 3:36 pm and is filed under Dakota Case, HOCKEY, The Wire Troll. You can follow any responses to this entry through the RSS 2.0 feed. Both comments and pings are currently closed.