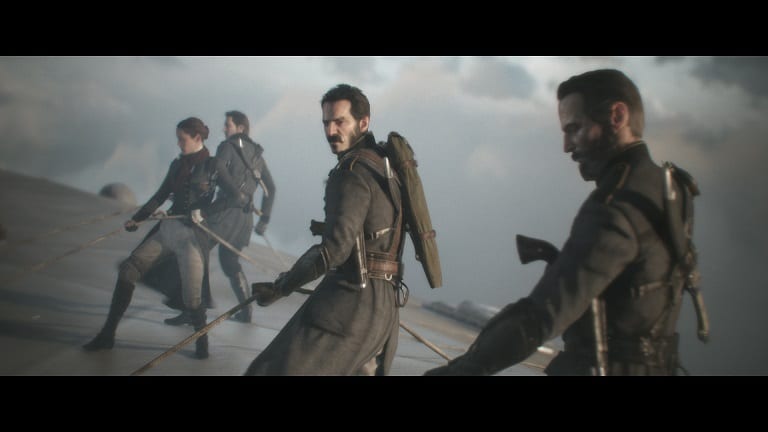 The airship sequence is one of The Order’s highlight set pieces.

Expectations can be funny things. Just because something is different doesn’t necessarily mean it’s bad. When it fails to deliver what you’ve been promised, however, people get pissed. The Order: 1886 has been cut down before it can get out of the gate, but it has less to do with the game itself and rather the expectations people put on it. The bottom line is that The Order is a technically sound and graphically stunning game — but is that enough?

If you’ve played Gears of War or Uncharted, The Order will feel familiar. It’s cover-based shooting, and the good part is that everything feels crisp and technically sound. Some games have a weird stickiness when it comes to cover, but The Order won’t leave you cursing at your controller. While there isn’t anything new here, it works smoothly, and that’s pretty much all you can ask for.

In between action sequences, The Order explores its world and narrative through quick time events. For fans of Heavy Rain or any TellTale title from the past few years, you know what to expect. Sometimes these feel immediate and gratifying, but other times it’s nothing more than a series of button presses.

Some encounters combine the two, allowing for real-time interaction with strategic quick time events. These are mostly successful and help create tense moments while preserving a cinematic view of the game’s events.

The Order may be the best looking game you’ve ever seen. Visuals tend to be the tradeoff for linear progression since the processor can focus on immediate output rather than keeping track of the world at large, and this is craftsmanship at its finest. There is no difference between cut scenes and gameplay, and everything from lighting to movement to facial animation is exquisite.

The world of Victorian London can be grey and bleak, and while the game’s colour palette can be dull at times, the detail never is. Ready At Dawn must have known it had a looker, and level areas vary quite a bit to ensure that you get everything from claustrophobic interiors to sky-high (literally) panoramas.

This is all complemented by a strong musical score and solid voice acting. As the game is dialogue heavy, any hiccups in performance would have been noticed, but The Order passes with flying colours.

Our only beef is that the decision to make the subtitles in such tiny text is confusing. This isn’t the first time a game from this generation has had his issue but when you have to squint on a 46-inch TV, that’s a problem.

Much of the pre-release hype behind The Order: 1886 has been negative based on two issues. The first is length, which isn’t a big deal as it clocks in a campaign time of about 8-to-12 hours. That’s standard fare. The other issue is that the game had too many quick time events. This is true, but the reason why so many people are put off by this likely comes down to expectations.

Every shooter has lulls between firefights. For the most part, this is filled in by one core mechanic. For example, Uncharted fills its between gunfight time with platforming and puzzles. Ready At Dawn tried a different route, one no one expected — filling that space with Heavy Rain-style interactive storytelling.

It took us about three hours of The Order for this to completely set in. We were so confused by the opening TellTale style sequences that it felt like we kept waiting for the game (shooting) to begin. But once we realized that this was the game’s unique rhythm, it made more sense.

That being said, the game breaks no new ground with its cover-based shooting. The pop-shoot-hide template is still fun, and there are some furious firefights that happen in unique environments, but there’s no twist or spin that allows the title to truly step out on its own two feet. Instead, its identity is based solely on the deep world it has created, one that can easily be mined into its own franchise.

Pacing is an issue with The Order, and not just with the in-between sequences. The first half’s level design is just plain better than the second half, particularly the stunning airship level that throws together just about every gameplay element it has and then some. This level is the combination of story, technical development, incredible graphics and pacing, and it’s a shame that The Order doesn’t match this level of quality consistently.

Even at its worst, however, The Order is still fun to play. Cool weapons and some truly fantastical environments overcome the faults when a sequence is just waves of nondescript enemies. Had this game’s design come out a few years ago, no one would be complaining. There’s just a sense that you’ve done it before, and its abrupt ending doesn’t do justice to what you’ve invested yourself in.

It’s clear that Sony and Ready At Dawn want this to be a franchise, and if the sales justify it, the next game could build on this foundation in a way that makes The Order: 1886 look like a tech demo. That progression isn’t exactly new when it comes to early generation games (see last-gen’s initial Assassin’s Creed and Uncharted titles), but there’s enough good here to enjoy this first experience.

The Order: 1886’s pros (incredible graphics, immersive world, technically sound play and some standout set pieces) outweigh its cons (nothing innovative, repetitive enemies), and its use of linear cinematic narrative is a take-it-or-leave-it debate. Some love story-based and focused games, while others want a gigantic world they can wander in. If you’re in the former, The Order: 1886 is a must play, though not perhaps at the full price point. It’s far from perfect, but solid gameplay and an intriguing and developed world have created a foundation for Sony’s new IP.

By Mike Chen
Tags: Gears of War, The Order: 1886
This entry was posted on Monday, March 2nd, 2015 at 4:38 pm and is filed under Mike Chen, Video Game Reviews. You can follow any responses to this entry through the RSS 2.0 feed. Both comments and pings are currently closed.